Hallie had her somewhat delayed 18 month checkup this past Wednesday and I've been trying to get around to blogging about it ever since. First, it was notable that the reception staff no longer knows us by name. It used to be, last spring and summer, when we were there on average once to twice a week, they had our charts pulled before we could exit the elevator door. Not kidding. On Wednesday, they had no idea who we were. That was lovely. (On a side note, the CVS folks see us so frequently that they hand me Hallie's various meds without me having to say a word, let alone identify us. It probably doesn't help that I am known to hang out in CVS giving Hallie a bottle while praying fervently that she finally goes down for a nap in her stroller).

Anyway, I digress. We waited a few minutes for Leanne, Hallie's wonderful nurse, to call us in for assessment and Hallie ran around the waiting room, waving at kids, playing with the toys (I ran after her pumping her little hands with sanitizer) and having a blast. When Leanne called us in, we stripped her and checked her head circumference (44.8 cm or 17.64 inches) and height (32.3 inches or .82 meters). And then we plopped her on the scale (it was the heavy one in the back; and of course we know this. We have, in the past, actually asked them to check her weight on both scales on the same day. They are about two ounces apart). We were shocked. She is now 25 lbs. 2 ounces (11.39 kilos) (which is just shy of 20 times her birth weight). She has gained about 10 ounces in ten days (conservatively) and this is with all of the vomiting (no doubt in part this is attributable to our double-feedings, since we will refeed her after every significant, seemingly belly-emptying upchuck). But still, Hallie's weight astounded me and we have decided to cut back on her last bottle of the night. Instead of basically compelling her to take 8 ounces at bedtime (something that Sharon can do but I cannot), we just are going to let her take what she wants. This ends up being 3-5 ounces, and that seems fine. It'll mean more sleep for mommy, earlier crib time for Hallie, and some end of the bottle in sight for the whole family.

We attribute a lot of this rapid weight gain (she went from 21 lbs in early October to 25 in early February) to the fact that she is absorbing more nutrients from her food. This is part and parcel to getting rid of the cow dairy in her diet.

When Rubin (her excellent doctor) came in, he was beyond impressed with her. The first thing he said was that he had been comparing notes with our GI fellow (Friedlander), and that he knew things must be going well since NO ONE had heard from us for quite some time.

But seeing Hallie is what really impressed Rubin. He had never seen Hallie walk before, and this was the first time that she vocalized at all for him. Hallie's coloring is good and clearly she is thriving (she is at 50th percentile for weight, 50th for height, and finally made it on the charts for head circumference at somewhere between the 5th and 10th percentiles. I asked Rubin if he was concerned about this and he said that he was not---her growth curve for HC is exclellent and Sharon also has, as Sharon puts it, a pinhead.). Rubin did suggest that, as we begin to move towards more solids, we might want to get Hallie tested for other food allergies or intolerances (we agree---we strongly suspect an egg allergy and would not dare to give her tree nuts without hard data that she isn't allergic to them). But that's down the road. Meanwhile, even though we are still on mostly stage 2s with some thicker fruit purees, Rubin was heartened to hear about the cheerios and other assorted relatively-meltable crunchy foods and he thinks that there's little reason for a huge amount of concern (largely because of the fact that he has never known us to drop the ball).

So, the appointment was all lovey-dovey (and Hallie was generally happy being there, except for when Leanne stuck her with the HEP-A needle---but at least she only had one shot). I did have to remind Rubin that we still need to be vigilant because of the extremely high propensity that micropreemies have for all sorts of learning and behavioral issues down the road, and he agreed that this vigilance was warranted, but from his perspective, he couldn't be happier right now. We agree.

And we especially agree since the omegas are still working their magic. Hallie has begun to take an interest in stacking blocks and her stacking rings (she never used to want to do this at all, and perhaps the timing is coincidental, but still, the biggest issue is that she is staying 'on-task' a lot more these days and has a much longer attention span and a much lower frustration level than she has had up until this point. She is also happier in general, and this with teething (I suspect some stomach teeth are coming in now...is there no reprieve?). And the talking is going really well--she says 'kitty' and 'teddy bear' much more articulately now, and has extended 'bu bu' (big bird) into something getting closer to big bird (not quite there yet, though). She also articulated "m" for the first time this morning (two or three times) and I am hoping that we hear a 'mama' or variation thereof out of our girl yet.

So it's been a good week. And I almost forgot: we have now had two vomit free days in a row again, bringing the total for the year to 8 vomit free days (three apparently urp free; the only reason I qualify this is that two of those days were nanny-days and not mommy-days and so we were not on hand to witness this). And we have 2 2-day stretches. So February is ending up to be a bit better than it had started out in that respect.

Meanwhile, I've been an awful mama and we've taken very few pictures of our girl this week. But I did take a few last night of her chubby little thighs. 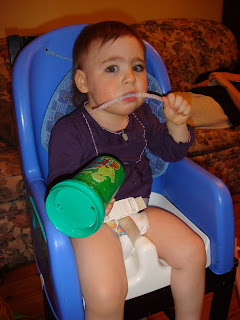 And, just so you know, these are all muscle...something very quickly revealed when Hallie leg thumps you with full force...oy.

Finally, a word about the cup. We've been giving Hallie Coach Farm Goat Yogurt drink, which she LOVES (I think it's really weird tasting---it's kind of like soupy runny chevre). Hallie especially enjoys it from a straw in the bottle (she has quite a good suck now, when she wants to) but that's sort of messy. So last night I gave her some in the cup she's holding in this picture. She immediately realized it was a Sesame Street cup and started to name the characters. Then she realized that the cup was even more fun: the straw pulls right out and is a corrogated texture. Better yet, the lid pops off EASILY. How fun! How messy! Needless to say, I won't be using this cup with her again for quite some time.
Posted by abby at 10:41 AM

It's so awesome to see all the progress she's making! She's huge (in a good way of course)! With all that these kids struggle through it sure is encouraging to hear the doctors talk about how good they look.

What a wonderful update. Great gains (in so many ways) during the past four months. All of your hard work continues to amaze me as does Hallie's progress. Isn't is the best feeling when your kiddo impresses the pants of their doc? Gotta love those moments.

Wow, i am so impressed of hallie's weight. Awesome !
My baby is kind a slowing down on gaining weight. He gained less than 2 lbs in 2 months :(

Anyway, i am glad to hear about Halie's news, keep us posted.

I am so glad to hear about the great progress Hallie is making! It must be really odd though not having the doctor's staff immeidately recognize you guys!