This is going to be a primarily picture post because I'm too exhausted for much more!

Hallie's full of personality and spunk these days and, for her, is talking up a storm (new words: day, play, 'is it' (as in "What time is it?"), is signing and saying a bunch of letters of the alphabet and numbers, and probably lots more that my toddler-addled and sleep-deprived brain cannot think of right now). But she's a total handful. She's been refusing to eat for me (I can't really blame her--she must be a bit bored of strained pears and goat yogurt, but still the kid does need to eat) and has been refusing naps for Sharon and often for me, too. It doesn't help that she's cooped up because the weather has been quite crappy (lots of rainy days, intermixed with partially rainy days) and she's teething and has major allergies and congestion. She hasn't gone to sleep easily at night for Sharon for a while now, and that's not making things any easier.

When she's awake (most of the time!), she's an exercise in entropy: 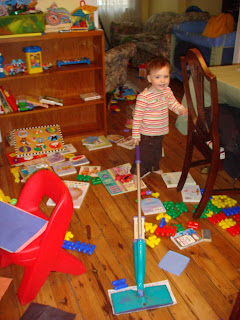 My sense is that a swiffer is not enough for this mess!

And she's been climbing, climbing, climbing. This is fine (well sort of fine) at the playground, where she is busily mastering the monkey bars. But not so good at home, where she climbs from the floor to the table next to the sofa, from the sofa to the aforementioned table, and from the sofa to the pack-and-play. She's also been standing on the sofa table, which has us having conniptions (especially since she fell off of it this weekend, either in the mounting or dismounting phase---it happened too fast for us to tell which). Finally, she's been sitting in her doll stroller. Me thinks she is a bit too big for it: 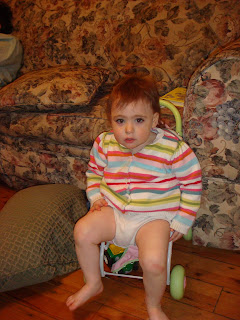 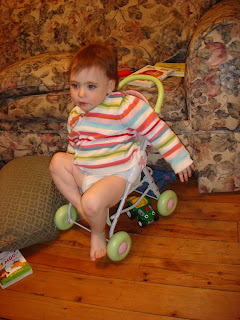 Alas, she has also been using the stroller as a foothold for climbing into the pack and play. We caught her doing this once
yesterday just as it was about to roll out from under her. Good thing she has a pretty decent sense of balance. And, needless to say, it's a good thing she's cute! 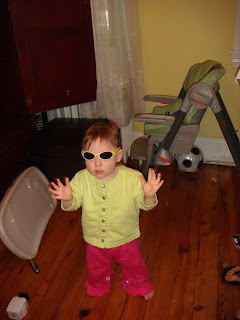 Amelia's pretty lucky that she's cute lately too. And sleeping/napping has also been a bit of an issue here. I think that they are so busy, busy, busy right now that they can't stop for long enough to fall asleep. But it sure makes for exhausted parents. I just hope that it is only a stage (and that it passes quickly)!

I can completely commiserate with you on the dare-devil/have-no-fear toddler turning Mom's hair grey issue... since Emma started toddling/climbing, I think I've single-handedly raised the stock value of Miss Clairol by several points :)

Oh my! Isn't it funny how we can't wait until they can crawl, walk, climb, etc... and then all of a sudden they're doing all of it and then some. What a doll. These pictures say it all. Too cute!

I remember her when she would have fit 3 or 4 of her in the doll stroller. She looks fabulous, every toddler ounce of her!

Long time lurker here. I have a request. My sister is engaged to a woman, and very much wants children, but is having second thoughts about a lot of things, including bringing kids into a 2-mom family and a terribly homophobic world. Would you be willing to talk to her? Email me at alm dot coxl at gmail dot com. Thank you!

She is very cute in those pictures!

We're still waiting for the day Arianna 'gets into trouble'. I think I'll throw a party the day she climbs on something and jumps off (heck, I'll throw a party if she does either of those things) but I think its just not in her personality (it was never in mine either my parents say).

I am LOOOOOOVING these pictures. She's cracking me up.