After we returned home last weekend from our fun-filled Saturday, Hallie announced to Sharon, "I ride REAL Horsie!" Clearly she was distinguishing this experience at the Ocean City carousel from her experience, earlier that day, of riding Cocoa at Atlantic Riding Center for the Handicapped. 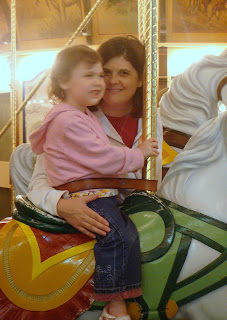 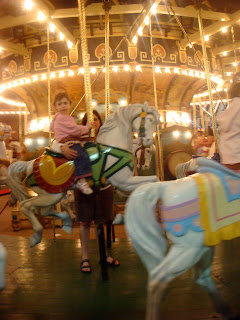 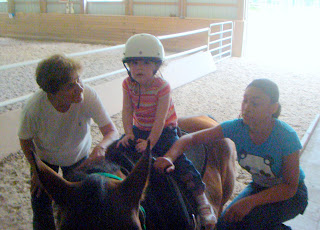 We were finally able to get some decent shots of Hallie astride Cocoa, thanks to her cousin Megan, who volunteers at ARCH and who was around on a day when she was not needed as a sidewalker or leader. In this shot, Hallie is doing some occupational therapy moves on her pony. This involves reaching for objects and placing them onto cones so that she crosses midline and better integrates both sides of her body; adjusting her center of gravity and turning so that she improves core strength and balance; and using her voice to issue commands or communicate with her therapist. 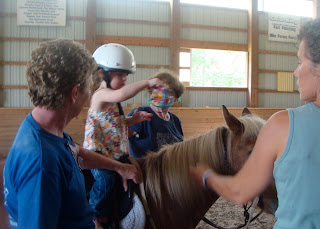 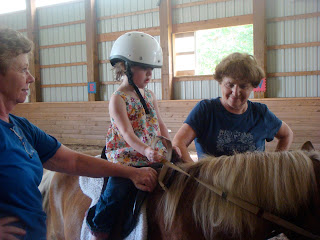 In the next couple of shots, Hallie is riding backwards on Cocoa and having a blast.
n 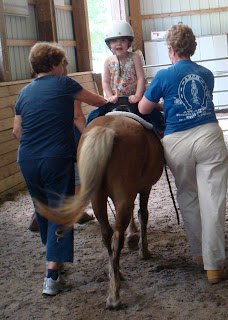 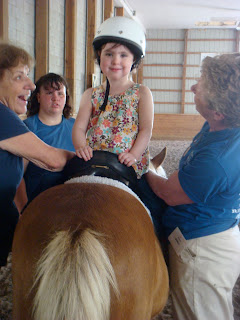 Hallie especially enjoys trotting on Cocoa since she has a fondness for speed. Sadly, it's hard to get still shots of this but we'll try to take a video of Hallie trotting at some point in the future.
Anyway, while riding Cocoa seems like (and is) fun for Hallie, it's also pretty serious work that is paying off in very tangible ways. At the beginning of the summer, Hallie could not climb up and down stairs without resorting to crawling or creeping. Now she needs only a little bit of support from us when doing this, as long as there is a banister or railing upon which she can grasp. Just a couple of months ago, Hallie found it very tiring to climb up playground structures and tended to shy away from doing this too often; on Friday, when I took her and Lea to a local playground after preschool, Hallie climbed up a smaller slide on her own (I used to have to help her a lot when she wanted to do this); ascended the ladder to the large slide entirely on her own at least fifteen times; and even dared to climb up one of those corkscrew like structures to the big slide. She did not need my assistance at all and, for once, I felt like I might no longer have to hover over or near her for fear that she would not be able to accomplish a physical task or, worse yet, lose her footing and tumble to the ground.
Riding Cocoa has also increased her self-confidence and her vocal quality. She is issuing commands to him and interacting with her therapists using her 'big girl voice' more frequently and she is always proud of what she is accomplishing.
In a word, this was one of the best things we ever did for Hallie. Some people we've spoken with about this think that hippotherapy merely amounts to glorified riding lessons for a somewhat spoiled child. This couldn't be further from the truth. We are so grateful that the many volunteers who work at and donors who contribute to ARCH have made this possible.
Parents only pay a small part of the costs needed for the upkeep of ARCH's horses and stables. I think there are a total of four paid staff members who work there (Megan can probably correct me if I am wrong on this number). The cost of providing hippotherapy to one rider each month amounts to $270 dollars and parents only contribute $135 dollars of this fee. ARCH is committed to trying to keep these costs down because the people who run it know that parents of special needs children already spend a lot of money on the various therapies and treatments and devices that their children need. Insurance doesn't cover the cost of hippotherapy at ARCH and, charging parents full price would put it out of the reach of many.
That's part of why I am writing this post. ARCH is having a gala fundraising event at the end of September and, hopefully (if we can find childcare), Sharon and I will be attending. We'd love it if others in the area might consider coming along with us, but even if you can't (or you live way too far away), please consider supporting ARCH. Even small amounts of money will go a long way to helping kids like Hallie make the kind of strides she is making. Just click on this link and following the prompts to find out how you can help. 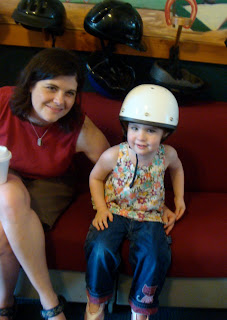 It's SO awesome to see her doing SO well with this!! If you can get me their number for United Way donations, I can specify them as the org that I want my donations to go to. (They should know what number you're asking for) Please tell Hallie how very proud Jakey and I are of her!!!