Back to Back National League Champions!!! 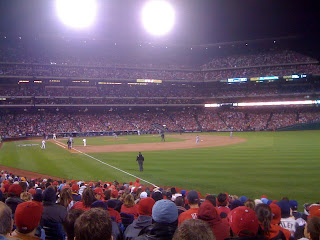 Today was Phillies Day at Hallie's school, and of course our girl wore her Number 8 Shane Victorino t-shirt, which had to be laundered last night since she also wore it on Monday (more on this in a bit). All of us were in our Phillies Red and wearing our caps, because we were root-root-rooting for the home team. Hallie made a very cute flag at school, of which she was exceedingly proud, that proclaimed: "Phillies #1". And, indeed, our home team is number one and headed to the World Series next week, which is a feat rarely repeated by teams (last National League team to do so was the Atlanta Braves in 1995/6; last NL team to win the World Series twice in a row was the Cincinnati Reds in 1975/6; methinks that we're about to give the Big Red Machine a run for its money). What I love about this team is that it is a team. Ryan Howard, the NLCS MVP, is a truly impressive player and he had some pivotal moments this series. But the whole team contributed to this effort, all season. There are no prima donnas on the roster; just solid players who have one another's backs and who do the best job they can to advance their team. It's refreshing to watch a team work like this one and to not have the sort of drama such as that brought on by Manny Ramirez or A. Rod.
Anyway, we're really pumped here in Philly. And not least of all because Sharon and I actually got to attend Monday night's Playoff game (game number 4) against LA, thanks to Jake's mommy, Gina. It was the nicest -- and most unexpected and unprecedented -- gift anyone has ever given us. Not only did Gina get us stellar seats which afforded us an amazing view of the entire game (which was a bit of a nail biter, and far less of a rout than the games preceding and following it and which ultimately proved pivotal since a 3-1 lead on the Dodgers essentially demoralized LA and sealed its fate as the runners-up in the National League). But she also drove all the way down here to watch the girls and get in some quality time with them.
Both of the kids were thrilled to see Gina; Hallie ran over and hugged and kissed her the moment Gina walked in the door and remained a social butterfly and chatterbox with her until bedtime. Lea took a three hour nap on Gina and woke up in just enough time to catch the amazing last inning. This gave Gina enough time to teach Lea how to 'high five' so that she could perform the move with aplomb when Jimmy Rollins got a clutch two-run triple with two outs in the bottom of the ninth when the Phillies were behind one run. We won that game 5-4.
Tonight, our lead was more commanding (thanks to several amazing multiple run homers by our boys) and Lea had ample time to practice her 'high five' skills. We're hoping that she gets to perfect those skills next week...meanwhile, time to get the team colors washed again. The weather for next week is all baseball!
As Hallie likes to say, "Go Phillies!" Now off to enjoy the rest of the sounds of the fireworks coming from Citizens Bank Park (designed by Sharon's architecture firm) which are completely audible in our living room which is a mere couple of miles from the stadium.
Posted by abby at 11:57 PM