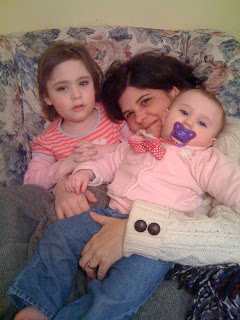 Just a short post before I get into bed. School went fine today (which was not unexpected; I am hoping that my $13.99 investment in yet another alarm clock continues to pay off; I suspect an earlier bedtime will help, too). The train ride in was great--I am probably the only insane person out there who looks forward to spending a couple of blissful hours on the train when I get to read for class or prepare powerpoint presentations but, let's face it, not much work gets done at home because my kids (quite correctly so) think that Mama is at their disposal for things like being tossed up in the air, tumbled upside down, and having pillows piled upon them. So the two hours a day that I get for work when I don't pay (much) attention to things like email, Facebook (which I am not a big contributor to in any event), etc really matter to me. I am not a big fan of the mile-long hike through unexciting terrain once I get to Lancaster (part of the problem is the lack of a really direct route to campus unless one wants to take a footbridge that is literally rusting under one's feet), but it does give me the opportunity to revisit my iPod's vast and un-listened to contents, not to mention that I could use the exercise. And it was nice to teach--particularly since some of my favorite students from a couple of semesters ago are enrolled in my classes and it's really quite nice to catch up with them.

Things went OK at home. First and foremost, it does seem that Hallie did miss me and that she understood that I was "at work" (though I am not sure that she comprehends what that entails. Really, there are only three things that a mama or a mommy might be doing if they are not in the room with Hallie: a. "Mama is hiding! She is playing hide and seek!" b. "Mommy is taking a shower" (apparently Mama never does...not sure why) or c. "Mommy (or Mama) is at work!" Anyway, she was fine with me not being here and very happy to see me when I came home.

Sadly, Nadia, our nanny, is not faring particularly well. She was running a fever and coughing her head off today and, consequently, Sharon had to leave work at around 12:30 and take over for her. Sharon will be using more precious PTO time tomorrow and Nadia, who visited yet another ER today, is on strict orders to stay in bed and recover. This is not good, and makes the location of emergency back up care all the more urgent for us. Sharon is going to call Hallie's preschool to see if there is any way that they can accommodate both of our kids for the hours that I work on an emergent basis. They are pretty full up, though, and have to worry about complying with state regulations concerning such things, so I am not holding my hopes out on this one. If anyone in the Philly area has any brilliant ideas about backup childcare coverage, please let me know.

Other than that, I just want to recount a couple of cute things about the kids before I roll into bed.

Lea: She's learned the sign for "all done" and uses it quite appropriately. I think it took her all of one day to master this. I've been signing with her---just a few signs, like "more", "eat", and "all done" and "all done" is by far her favorite. She remains a fabulous communicator who lets us know her needs, and this is very, very useful.

She is also Hallie's #1 fan club member. She wants to do anything that Hallie is doing and gets very frustrated when her comparatively less agile body gets in the way of such endeavors. She is cruising and thinking about walking, but not quite strong enough to do so. But that does not stop her from climbing up onto the chair that Hallie turns into a trampoline and trying to jump up and down on it. She is very pleased with herself when she does this (which is now quite regularly).

Lea is also mastering the art of stacking blocks. She saw me do it once or twice and took over from there. 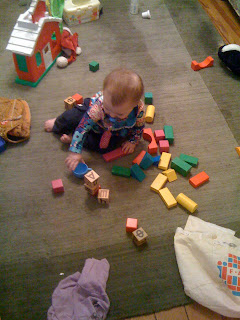 She knocks them over often and thinks that's pretty hilarious too.

Lea is chatting and babbling up a storm and a couple of times I could swear that I have heard "shoe," "Hallie", and "Lea," but no "mama" or "mommy" quite yet.

Here's a cute shot of Lea lounging on the chair on top of Hallie, who of course was quite happy to be smushed by her sister: 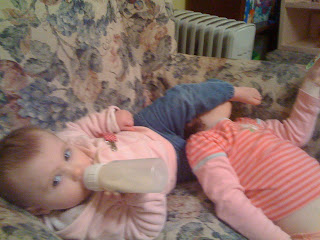 Hallie regularly asks to hold Lea and is always excited to see her. Whenever I pick up Hallie from preschool, she squeals with joy when she sees her little sister. 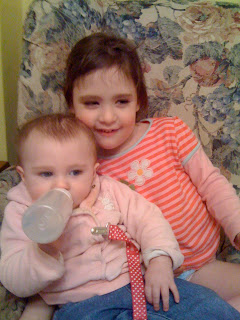 Hallie also likes to "pretend to be Lea" and much of this pretense involves sitting in the swing (for which she is at least seven pounds to heavy, but I suspect that Fisher Price takes this into account in its design process since all the older kids I know who have long outgrown their swings like to get in them and try to strip the mobile at the top by pushing it in the opposite direction simply because it makes a really cool, yet quite grating, sound). Here's a shot of Hallie pretending to nap in the swing: 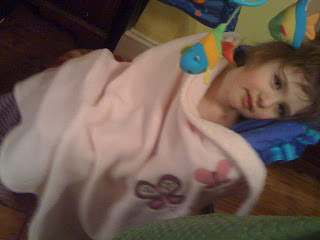 Hallie is not only acting super cute these days, but she's turned into a championship level eater (comparatively speaking, that is). She has been regularly downing 24 to 28 ounces of her super-charged goat milk, which has me a bit annoyed (I cannot believe that I am actually writing this) because I have to make a lot more batches than usual and this is consuming more time than I'd like right now. Additionally, she has developed a fondness for what she calls "chocolate popsicles" (known more conventionally as fudgsicles) and had two of them at Aunt Laura's the other day (she would have had a third...of course, they were the sugar free kind, but hey, 40 calories apiece does add up). She had one last night and part of one tonight. Hallie loves chocolate and has asked for "chocolate sticks" (Hershey's bars) several times now and has actually eaten part of them, which I think is great. At the very least it's allowing us to whittle away at the remaining Hallowe'en candy (we are not big candy consumers around here so we still have quite a stash on hand). Hallie's also been demanding snacks more regularly and tonight even ate a quarter of a grilled cheese sandwich and pronounced it "delicious." She's been rubbing her tummy and declaring things yummy and saying "mmm...that's good" about lots of stuff. Of course, she still refuses to eat vegetables and prefers junk food to everything else, but I am not too concerned about this. She gets her daily recommended dose of vitamins in her bottles and I think it's grand that she is not only willing to eat but that she eagerly requests food. I will be very surprised if she hasn't gained some weight over the past two weeks; she looks really good. Not much vomiting lately, either. We are up to 15 days without regurgitation after a pretty bad start this year, and that is a grand thing.

Hallie is also making some progress on the potty. She has earned four stickers so far and will get a prize tomorrow if she goes on the potty again. She still cannot/does not let us know when she needs to pee, but we are not pressing this matter too much just yet. She is excited to get stickers and, hopefully, by establishing some sort of routine, we will eventually get her potty trained. I think we'll try in earnest around her fourth birthday -- I'll be home full time (since the semester will be over by then) and can take charge of keeping her pull up free and deal with the inevitable consequences that arise from this.

That's about all for now. Time to turn in!

Good job on the potty training!

But really what are you doing posting this in the middle of the night? :)

Check this out. I used the place on JFK Pkwy before but they don't do back up care anymore. The place at 18th and Market might.

Check this out. I used the place on JFK Pkwy before but they don't do back up care anymore. The place at 18th and Market might.