Playing Sure Helps Work Up an Appetite!

On Friday when I picked up Hallie from preschool, Lea was sleeping in the stroller. Hallie had just finished a PT session that involved a lot of running, jumping, and climbing up and down the stairs, but she was still full of pent-up energy. There were a couple of other kids hanging out on the grounds of the preschool and I know that one of the little girls is someone that Hallie has occasionally played with at our local playground (we actually have quite a few local playgrounds, but one is a mere half a block from our house so, even though it's far from the nicest of the bunch, it's the one we frequent most often). Anyway, I was hopeful that Hallie might join in with them in their play since their small number wouldn't overwhelm her. Hallie had other ideas, and while they didn't involve other kids, they did involve using her imagination.

She crept behind one of the evergreen bushes and when I came and stood next to her, she said, "look, that's a spooky forest!" Since she went on to say, "look, there's the Boots the Monkey!" she was apparently referring to a Dora the Explorer Halloween special that aired last about nine months ago. I can't confirm this since I have nowhere near the prodigious memory that Hallie possesses. But never mind: in what I think was good Floortime form, I shouted, "look, there's a ghost!" and proceeded to make all sorts of scary goblin ghoulish noises. She thought this was hilarious, and the whole thing ended up turning into a big game of chase with sound effects.

Then we went on to play Hide and Go Seek. She still doesn't get the idea of hiding when it's her turn to do so, but she gets a kick out of looking for me (I do, however, suspect she's peeking since she seems a tad bit too good at this game). We raced around and hid from one another for quite some time. 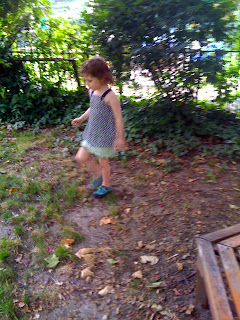 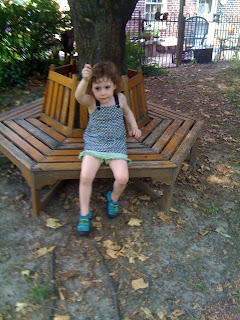 Just as Lea awoke from her nap, Hallie asked if we could go get ice cream. This has turned into a ritual of sorts: at least once a week she'll request ice cream--chocolate, of course--and we'll head off to the Haagen Dazs shop on South Street for a kiddie sized cup. This time, however, Hallie requested a cone. She's never requested a cone, let alone eaten one before, and I was happy to indulge her.

Hallie did not quite get that you are supposed to leave the napkin wrapped around the waffle cone to catch the drips. Nor did she actually eat the cone. But she loved holding it. Ultimately, however, things got too messy to eat that way so I dumped the remaining contents of the cone into a cup and Hallie proceeded to devour the remnants of her treat. Start to finish it took her less than 20 minutes to eat about 4 ounces of ice cream. 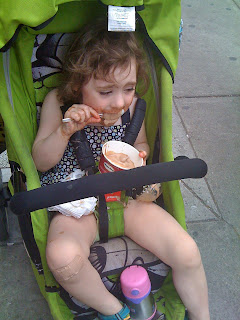 This was, of course, far from a neat prospect. She ended up wearing quite a lot of the creamy chocolaty stuff: 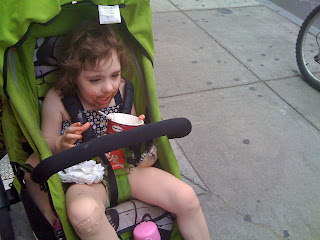 After Hallie was done with her ice cream, Taylor and Renee joined us. The girls were thrilled to see each other for the third time this week. We ended up having a grand time at Three Bears Playground, which was virtually empty. Of course, it was about 6:00pm, which is probably prime preschooler dinner hour. Hallie had already finished up her 'dinner', which was the ice cream. She did go on to eat a couple of slices of bread and butter when we got home later on but I think most of her calories came from the ice cream. As of her last weigh-in a couple of weeks ago, Hallie tipped the scale at 34 lbs, 5 ounces and we are hopeful that she might keep it on this time. I think Haagen Dazs must be responsible for at least a couple of pounds of this healthy weight (Hallie is at the 50th percentile for weight and 90th for height---she is now just shy of 43 inches tall).
Posted by abby at 11:52 PM

Hallie has a wonderful imagination!

And I liked the icecream photos very much.

She has grown a heap this year.