This year, Hallie is all about holidays.  She's aware of the structure of the calendar for the first time (they are studying the days of the week, the months of the year, the seasons, and their respective holidays in her pre-K class at preschool this year and Hallie appears to be following along with the lessons quite nicely).  Hallie loves costumes almost as much as she loves chocolate (plain, nothing mixed into it, please!), so Halloween, the first real holiday of the fall term, is naturally quite attractive to her.  And I cannot help but think that somehow she knows that this was the first holiday that she spent with us at home after being sprung from the NICU on October 10th.

Four years ago, Hallie went as a baby dragon: 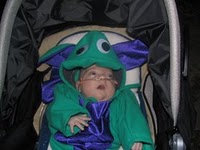 We chose this costume because Hallie sounded an awful lot like a dragon when she made noise (which was not terribly often, truth be told.  Little did we know that this was one very good indication that her vocal cord was paralyzed).  Not to mention the fact that the costume, which was essentially a little green and purple robe into which we bundled Hallie, was easily compatible with the tubing that went with Hallie's oxygen canister.

Needless to say, Hallie did not trick-or-treat at all that first year.  She hung out and napped in her stroller while I distributed candy to other kids.  That was activity enough for our not-quite-one-month-adjusted micropreemie who weighed in at about seven pounds, soaking wet.

Four years later, Hallie still loves dragons.  But she didn't want to be one for Halloween.  Instead, like a lot of girls her age, her choice was Tinkerbell.   Hallie had been looking forward to this event for weeks and somehow we managed to keep her dress clean (there was a last minute run in with some chocolate ice cream that fortunately ended well) and her light-up wings from getting bent out of shape.

Here are a couple of shots of her at the annual school Halloween parade (which, sadly, I had to miss this year since I was teaching on the freakishly warm--with highs in the mid to upper 70s--Thursday afternoon on which it was held): 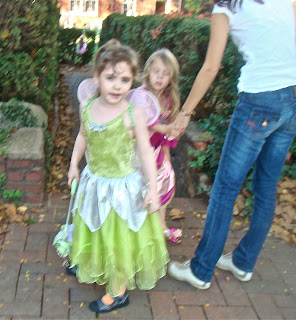 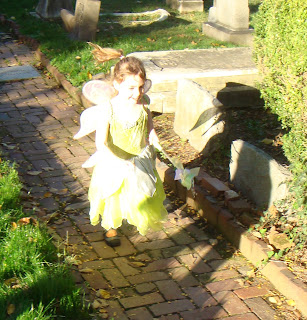 Here's a shot of Hallie with some of her school mates: 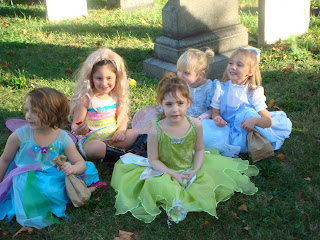 It was a bit harder to figure out what Lea wanted to be for Halloween.  At least in part this was related to the fact that Lea does not really enjoy donning costumes.  She grooves on trying on other people's shoes and she can get into wearing hats.  She's even eager to dress herself in whatever laundry (clean or dirty) might be awaiting transport down to the washer or up to the bedroom for folding and stashing away.  But costumes are not her thing.

We did buy her two, and she did end up wearing both.  The first--a fairy butterfly outfit--was more suited to warm conditions, but did not make Lea very happy at all.  This was the best shot of her that we got: 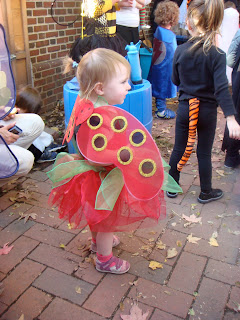 Much more representative of Lea's response to the entire event are these pictures: 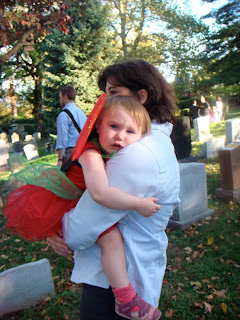 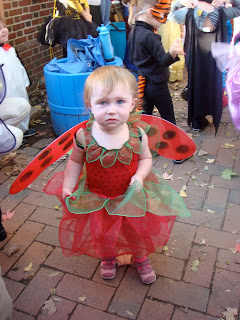 Lea was no more thrilled to wear the second costume which we bought her, which was more appropriate to the very cold weather that we had on Halloween proper.

Here's Lea not enjoying being the Cat in the Hat: 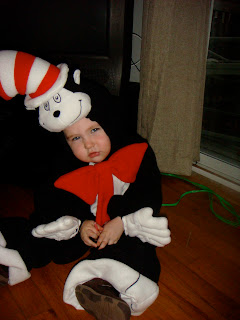 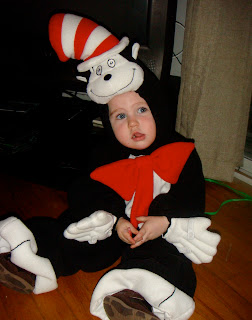 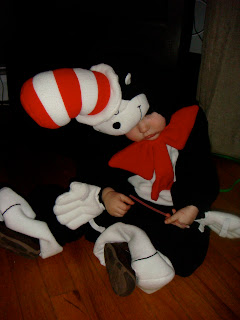 Hallie, in contrast, really enjoyed posing with her cousins, Red Devil Hannah and Adam ("Anakin") Skywalker in advance of heading out to collect candy: 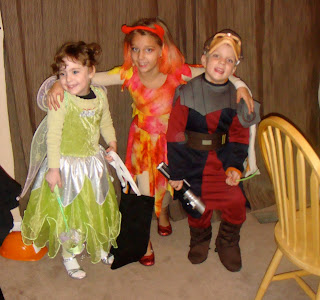 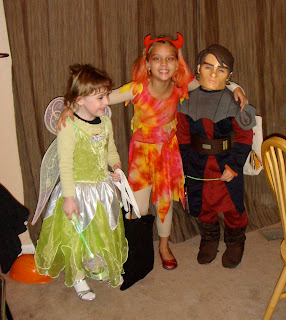 Lea perked up a bit when she realized that we'd be heading to the development down the road from where the cousins live in Lea's trusty Radio Flyer wagon: 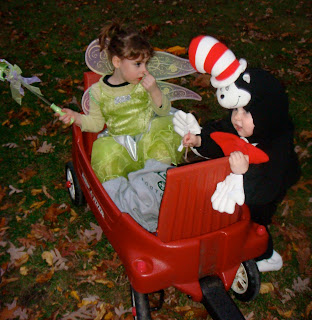 She also became markedly more enthusiastic when she realized that trick-or-treating involved being given vast quantities of chocolate, of which she is very fond.

Here's a picture of Lea in cousin Sarah's arms.  We are pretty certain that she got extra loot for being so cute: 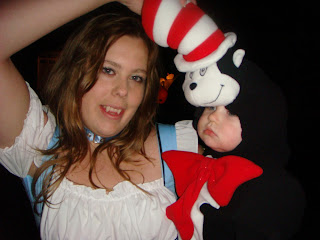 By the end of the evening though, it had gotten seriously cold, and Hallie was shivering in spite of the fact that she was wearing leggings on top of tights and a long sleeve shirt underneath her costume.  She took refuge under the blanket that we had brought with us (on the urging of Aunt Laura, who was smart enough to realize to know how cold it was going to get once the sun went down) and all you could see of her were her light up wings: 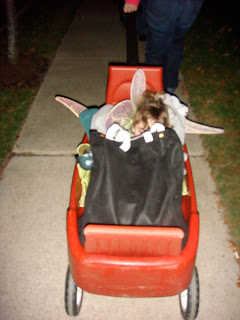 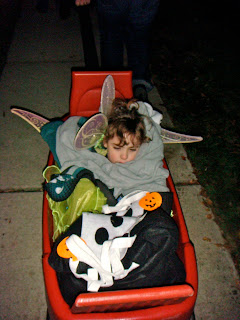 The kids were completely tuckered out on the drive home (though they each demanded and ate a bit of their chocolate).   And they're still eating their way through their stash (and will be for a while).

Well, at least it's still not quite Thanksgiving, so perhaps I can be forgiven for posting these pics so belatedly!
Posted by abby at 10:29 PM

So cute, and I love the new layout! Lea's Cat in the Hat is my favorite... surprise, surprise.

Halloween is so much fun. They both looked to cute. I can ee why Lea was not too fond of Cat in the Hat, it seemed like she 'tolerated it'.