Because Hallie gets a lot of itinerant services (occupational therapy, physical therapy, and speech therapy) and is in a social skills inclusion group that meets at the girls' (wonderful) preschool three times a week, Lea and Hallie are on slightly different school schedules.   Both kids at school for stay full days (until 5:30pm) on Mondays but I pick up Lea at 3pm on Fridays and Hallie remains at school for another two and a half hours.  While this complicates matters for me (I feel like I am circling back and forth to the YCCA endlessly on Friday afternoons), this somewhat odd childcare arrangement has afforded me some very good opportunities for one on one time with Lea.  As a second kid and as a younger sibling of a somewhat complicated older sister (who consequently gets dragged to therapy sessions and spends an awful lot of time hanging around in waiting rooms), I think it's awesome that the two of us get some quality time together. 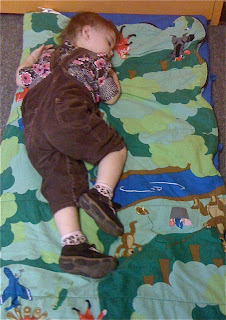 I find this ironic since she almost never goes down for a nap for me (at least not easily while we are at home and Hallie is here with us).  The best I can hope for is that she conks out in the stroller when we are headed to or from some activity; otherwise, she fights to stay awake since she might miss something important.  In contrast, at school, she goes down easily for her teachers, Miss Janet and Miss Rachael.
After Lea awakens (or I coax her gently from sleep), she's ready to go.  First we excavate her lunchbox in search of snacks.  On the off chance that she has finished everything (and that everything usually amounts to quite a spread that includes a couple of chicken nuggets or chicken salad; some peas or edamame; fresh fruit; something crunchy like yogurt covered pretzels or Barbara's vanilla animal crackers or 'fishies'-- Pepperidge Farm goldfish -- and yogurt, I carry spare crackers or pretzels with me for an impromptu additional snack.  In decent weather, Lea would request a visit to the playground across from school.  Here's a picture of Lea swinging in her favorite swing. 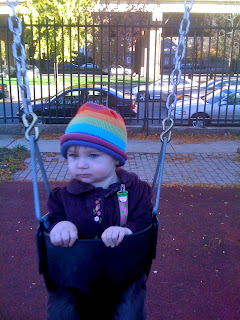 Whilst swinging, she'll point to the "castle", by which she means Sparks Shot Tower, which was America's first shot tower, constructed in 1808 by plumber Thomas Sparks and his partner John Bishop.  It's 142 feet high.  The reason it's so tall is that, before mechanization, the only way to construct perfectly round musket balls, or shots, was to pour molten lead from really high places.  Bishop was a Quaker.  Manufacturing gun shot was an uneasy job for someone whose religion avows non-violence and so he quit the business when it began to supply musket balls for the War of 1812 (before that the shot was used in hunting).  The last great musket battles were fought in the US Civil War, and Shot Tower produced war materiel for the Union Army engaged in that conflict.  Anyway, long after its product became obsolete, the site was slated for adapted reuse and is now part of the Philly Rec Department.

I think Lea is quite correct in assuming that it looks like a castle: 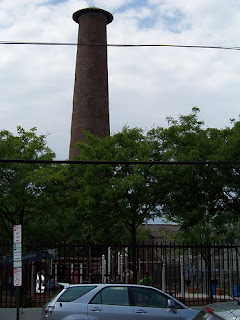 It's gotten a bit too nippy for regular playground visits (I literally got Lea stuck in one of those swings when I bundled her, and her snowsuit, into one on a particularly blustery day a couple of weeks ago.  I literally had to turn the swing on its side and shove her out of it that way, which was somewhat harrowing since she's gotten pretty big).  So we've taken to visiting the nearby dog run where she can watch the dogs play from the comfort of her stroller (snowsuits and blankets and all).  The neighborhood dog owners get a kick out of Lea who engages the dogs in full length, complicated conversations; squeals with joy; and begs for 'hand kisses' from the pooches.
After a playground visit and/or a dog run, Lea will often ask if we can repair to the local cafe.  She hangs out and has a snack with me like a big girl: 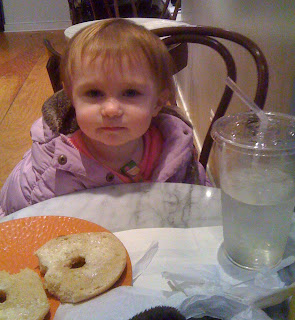 She often rejects her own sippy cup or even a box of Horizon organic chocolate milk in favor of my drink (in this case a sugar-free vanilla Italian soda). 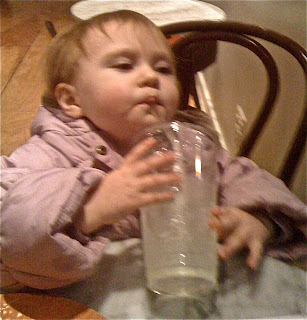 After our snack, we're usually ready to pick up Hallie.  While Lea loves spending time with me, she is always ready to get her big sister.  She adores Hallie and worships the ground upon which she walks (and wants to do everything that Hallie does, which sometimes brings the two of them into a bit of conflict since Hallie, as a typical older sister, wants to call the shots and set limits for Lea).  So she's always thrilled to go back up to the school and get her sister.  But I like to think that Lea enjoys our quality time, too.  I know that, down the road, she might not be so satisfied with spending time with me when Hallie gets to play with therapists and ride horses and have extra classes.  And I certainly hope that we can make it up to Lea by getting her special classes and doing things that satisfy her interests.  But I must say that I love this Lea time and it's some of my best spent time all week.
Posted by abby at 12:46 AM

I'm just catching up - haven't had much blog reading time lately! Looks like you had a wonderful Christmas. That's so fun that you have special Lea time. Aren't siblings wonderful though? Sam also worships and mimics Gavin, and seeing how well they (mostly) get along just makes me so proud as a parent.