The kids spend a lot of time on our couch.  They jump on the couch; they fall asleep on the couch (this used to be a prime napping zone and it's still where Lea falls asleep every night); they stand on the couch looking out the window; they climb onto, tumble over, and hang out behind the couch (where their millions of stuffed plush creatures reside).  While I will not miss the couch (and its mate, the chair) once we so trash them that we really do put them outside to be picked up and/or turned into firewood, I imagine that the kids (and the cat who has ripped up the couch and chair) will lament their absence.

Anyway, here are a few random pictures of the kids on the couch that I took (and never posted) this winter.

Our heat was out in this one.  We have a pesky boiler that we installed new when we bought the house but that has a piece that blows out constantly.  The piece, called a thermal coupler, costs about $3.00.  The heating repair folks charge $300.00 to replace it.  Sharon has learned how to do it herself and has saved us about $2990.00 over the past ten years.  But sometimes it takes a day or two to track down the right part when we run out of the stash we maintain, so the kids were huddled up in blankets on the couch while Sharon hunted down the correct piece.  They looked awfully cute when doing so. 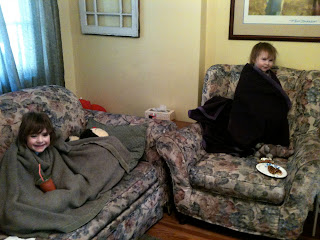 In this picture, Lea is pretending to be a dragon.  She makes an awfully cute dragon, but I am not sure why the blanket's makers decided that dragons are orange. 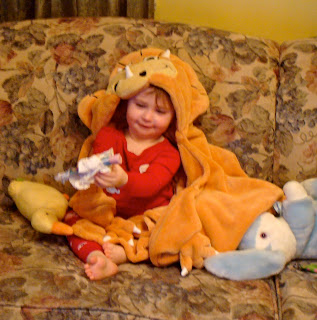 And here Lea has fallen over, fast asleep after a session of jumping on the couch. 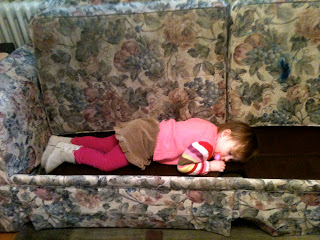 Love this post. My kids fall asleep on our couches too.....we just replaced them a few weeks ago and Sam had a really hard time fallen asleep on the new ones for a week or so!