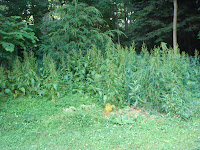 Despite our joy at celebrating Hallie's birthday, June is a hard month for our family. It opens with the painful memories of the shock and trauma associated with our visit to Labor & Delivery when Sharon hit 23 weeks when we found out that Sharon was already in hard labor, mostly dilated and effaced, and that the twins' birth was imminent and seemingly inevitable. Its middle is punctuated by the girls' arrival and the horrific and desperate feelings with which we were awash as we hoped and prayed that the girls would somehow pull through and thrive despite the earliness of their birth and the precariousness of their condition. Those sleepless, restless days are as fresh in my mind as they were back then. And the month ends with our loss of Olivia and Hallie's own ongoing struggle to live.

It's hard to believe that two years have passed already, but they have. And, like last year, we visited Olivia's Grove in Pastorius Park to commemorate the occasion. We love that the park is a place of new life and ongoing life---the trees we planted there are young ones still, but the park itself, which has been around for about a 100 years and the trees in it for far longer (some probably date back to colonial America).

Like last year, the early evening threatened to bring a major downpour, but this time it did not actually rain (though the grass was wet which suggested that it had rained out in Chestnut Hill earlier on Saturday). We spread out our blanket not far from the grove, where we laid a bouquet of wild flowers; fed Hallie a late lunch; and then let her run around. She had a very nice time chasing Sharon, chasing a ball (and even kicking it), and engaging in her favorite activity: running with, and loving on, the dogs who come to the park for their own recreation. 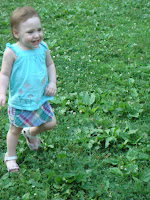 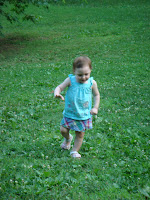 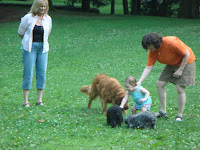 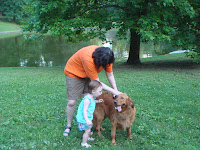 We hope that Olivia's spirit was able to visit with Hallie on Saturday and frolic with her, even for just a bit, as she enjoyed the flora and fauna. And we hope someday that Hallie will realize what this park, and what this grove, means to us as a family, and how important it is that we have a living memorial for her sister.
Posted by abby at 12:51 AM

I got teary reading this, and am thinking of you.

Reading your memories brings back the flood of emotions that I continue to experience through the month of July.

I wonder if the freshness of those memories will ever dissipate.
Much love,
Billie

Thinking of you all, and remembering your sweet Olivia Skye. I too hoped she was able to be with her sister in spirit.

I am certain she is having angel playdates with my Logan, and that they watch over their siblings together.

Olivia's Grove is such a beautiful gift you have given to Hallie. A place full of life and renewal and, most importantly, a place where Hallie can always find her sister's spirit.

I am certain that sweet Olivia was there with you all on that day. Thinking of you....