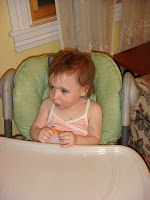 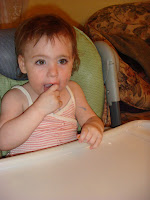 Who knew that we were going to end up being the sort of moms who not only constantly puts their kid in front of the DVD player to eat but also gives her french fries at every meal, including breakfast? Seriously, if you worked on these two pieces of evidence alone (and left out all of that bigger context stuff that we historians are always worrying about), you'd be on the phone with Child Protective Services about now.

Anyway, the fries are a big hit around here, and yesterday Hallie ate 8 for breakfast and 12 for dinner (and would have eaten more had I prepared more). She loves her 'sticks.' Apparently, one thing we should do is call any new food a 'stick' (and cut it up appropriately if it is not conveniently stick-sized and -shaped) and the kid will eat it. But I think, on second thought, that we also have to find a way of frying said foods: there is something about the texture, taste, and snap of fried foods, which are inherently crunchier on the outside and tender on the inside, that Hallie finds singularly appealing.

Regardless, there has certainly been quite a bit of progress on the food front around here, and for this we are very grateful. It sucks that we can't just go to any old restaurant and order up a plate of fries for Hallie because so many commercially available fries are coated in wheat or rice flour, or contain dairy or eggs (who knew?) but at least we can bring some safe brands with us (the organic shoestrings from Whole Foods or Cascadian Farms are two brands that seem to work nicely) and heat some up for her.

Next week, we'll try prunes/plums. And if all goes well, venture into the wide world of beef thereafter. Hallie's iron count is okay right now, but her iron stores are low, even with the very good daily multivitamin and minerals she is getting. Hallie's pediatrician is not terribly concerned and does not want us to add a supplement right now because this could wreak havoc with Hallie's system, but he does want us to try to get another, more iron-rich protein source on board if this proves possible. If that doesn't work, we'll seek out vegetarian-based iron sources (food, preferably, but if not food, then a veggie iron supplement).

Meanwhile, we'll revel in the fact that Hallie has officially passed bananas. She has had four vomit free days in a row, and the only days in the past two weeks when she has vomited have been from crying or injuries (and most often both) unrelated to food allergy issues. She is now up to 72 vomit free days this year and we have only done 2 loads of laundry this week (YAY!).

Overall, Hallie is energetic, talking, signing like a champ (better than I do, by far), and in a very good mood overall. The only annoying thing she has begun to do this week is to go up for her bath and bottle at 10 or 10:30pm, drink 2 ounces while lolling on the futon, and then want to come downstairs to play for another half hour. She's done this two nights in a row at this point and, on the first night, we attributed this to a very late nap. Last night, there was no reason to which we could attribute this except for the fact that she's establishing a new trend (Hallie has very well-established routines: when she passes the bathroom she must stop in and brush her teeth; when she passes the blue canister of coffee in the kitchen, she must remove and replace the pewter scoop, etc etc). We are hoping to break her of this new nighttime routine today: we are going to spend the night at Sharon's mom's condo and there is no downstairs. Perhaps this is enough of a switch up to rewire whatever side of the brain that establishes routines. Hopefully it will do the trick!
Posted by abby at 10:48 AM

Congrats on the fries! They currently are not working for us.

As far as an iron-rich supplement, my husband and I blend spinach with bananas and water and drink it like a shake, (green smoothies). You can flavor them many different ways and it might be an option as you can get a TON of nutrients in a glass and Hallie obviously drinks well.

Hope the plums/prunes work. Can you try Orange Essence prunes or do they have too many additives? I know there is quite a big of sugar in them, but they taste like candy. Food allergies suck.

Oh, and I'd let Emery eat off the floor if I thought he'd eat :) No bad parenting on your end at all!

Have you thought about french toast sticks. Ty was not a fan until recently and now he loves them. Instead of syrup we give him "ketchup" aka rasberry jam and he is in heaven. He even thinks they are fries. Also Trader joes has some carrot fries. Might be worth a try