Hallie's cruising for an opportunity to be taken to see Sex and the City whenever it is that Sharon and I finally have the chance to do so ourselves.

You see, it turns out that Hallie has a bit of a shoe fetish. She has learned to put on her crocs and not just take them of. She's known how to do the latter for months, much to my consternation, since I am constantly being stopped all the time in Whole Foods to be informed that my child only has one shoe on and have even been chased down by nice customers who have retrieved my kid's other croc, Cinderella-style. None of the retrievers have been Prince Charming, alas, and happily Hallie's crocs are not made of glass or we'd be in some serious trouble (we learned this the hard way at Starbucks the other day when Aunt Renee and I were horrified when Hallie's glass Dr. Brown bottle shattered upon contact with the tile floor. The folks at Starbucks were totally nice and cleaned up the icky mess and I went out to Baby Depot the next day and invested in more of the BPA-free Dr. Browns).

Anyway, over the past few weeks, Hallie has been putting on her own crocs, as well as our shoes, and on occasion those of Uncle Mark and others. She loves shoes a lot. Thus, I'm not sure why we didn't think of this earlier, but the perfect place for an outing with Hallie on a day when the temperature is hovering around 100 degrees is Stride Rite. One look around and the kid acted like she'd been let lose in a candy shop (we didn't actually let her lose much because the store's big glass doors are wide open and Hal has a strong penchant for exploring her environment. She thought the dress department and women's rest room area---which was truly ultra-comfy in an old Department Store kind of way---was a playground but was a bit too interested in the escalator for my taste).

Hallie's tastes lean toward bling---anything shiny and bright and bejeweled seem to be her favorite kind of footwear. She dragged a lot of pairs like these off of the shelf, but her absolute favorites were the following boots, which are clearly made for splashing (and I imagine also for gnawing on): 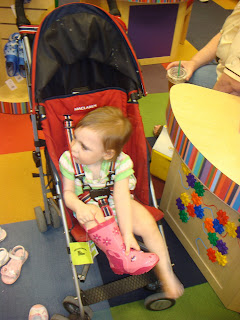 She was so enamored of them that a certain over-indulgent mama (that's what Sharon calls me these days) decided that our girl had to have them as part of her birthday present. I think she'll be thrilled when she opens these on Wednesday. I bought them a couple of sizes up---Hallie still has pretty small feet, though not nearly as small as many of her fellow micropreemies, and wears a size 6. She was wearing a size 5 at Christmas, so at this rate of growth, the size 8's I bought her---I'd have gotten the 7's but they were out of stock---probably won't really fit her for some time. Still, they are nice and big and easy to put on and I expect that most of the fun of these for Hallie will be in putting them on and taking them off and starting the whole process all over again.

Anyway, here's Hallie modeling the shoes we bought for her yesterday. We definitely let Hallie do most of the choosing. This is not only because we are indulgent but because Hallie has a huge scar on her left foot from where her pulse ox band burned through whatever skin she had at birth. The scar is heavily keloided and is located at precisely where the top of most shoes end. This means that shoes often rub her foot the wrong way and we suspect that this is painful. This is why Hallie frequently puts on only her right shoe and walks around the house in just that one croc. The saleslady at Stride Rite brought out the two pairs that Hallie (and we) liked in Hallie's size and when she tried to put the first shoe on Hallie's left foot, Hallie flinched and withdrew her foot. That was clearly a no-go. But she liked the other pair of sandals just fine (it seems) and today asked me--by dragging them over to me--to put them on her (she cannot quite manage to close the velcro, though she has no problems opening it): 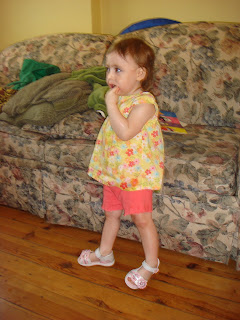 They do look super cute. And speaking of cute, here's a few other pictures from this weekend (sadly, too few).

Here's one of Hallie trying out Carmen's dog bed at Elisabeth and TJ's: 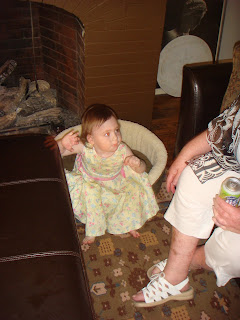 And this sweet one is of Hallie curling up on Grammy's lap with her bottle. Notice that, while she does hold her own bottle, she doesn't actually tip it in such a way that any milk will flow out. I guess she's already on her Sex and the City diet and is saving all of her calories for a cocktail with a bit more of an edge to it (frighteningly enough, she does seem more interested in dipping into our glasses of wine with her grimy little fingers than in any other source of calories). We are not amused. 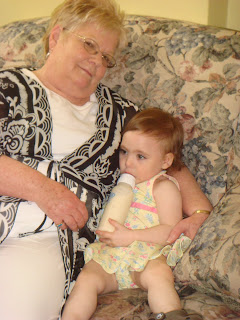 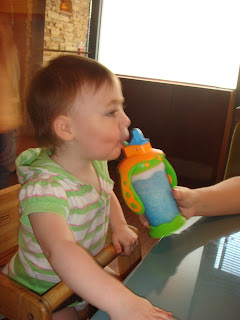 Her facial muscles are really getting stronger, and drinking from a straw really helps them. Hallie was such a good girl at Jones this Sunday, where we stopped in for brunch en route to the Cherry Hill Mall (we love visiting Philly restaurants on summer weekends because everyone is at the shore. It kind of makes up for not being at the beach, and frankly, air conditioning trumped sea air for me yesterday. Everything trumps sand). Hallie was easily amused by her Lesser Evil Krinkle Kut sticks (she loves these things...we wish Whole Foods still carried them), a big glass of ice (the melt-off from which was an opaque grayish-color by the time she was done...see grimy little hands above), and a bit of people watching. She was very very content to let us eat our breakfasts, and we thank her a great deal for this (note to Hallie: you are definitely more likely to get your moms to whip out their credit cards and buy you shoes when you behave the way you did this weekend. Please do not enter the Terrible Twos in a couple of days from now).

On the soy challenge: she loved the soy milk yesterday morning and tonight for dinner. She did not have any immediate reaction, which was good. She was on the fussy side last night (Sunday night) after Sharon and I got home from taking Aunt Kim out for a birthday dinner, and was having a lot of trouble settling down to sleep. I tried bringing her downstairs with me while Sharon got a bit of rest, but after an hour---around close to midnight---I decided it was time for Hallie to turn in. She fussed and fussed and cried and did end up throwing up (and I ended up with another load of laundry), but we're not sure all of this was related to the soy. She also has three hives on her face, but they came out today and the allergist on call at CHOP thought that the time difference between ingesting soy and their appearance was way too long to attribute them to soy. So we tried soy again tonight and she settled right down to bed. We may just have fed her too much too late yesterday (she kind of missed all naps and lunch on Sunday). Anyway, today was vomit free day number 53 and we're hoping to get into the 60s soon!
Posted by abby at 3:23 AM

Emiline just announced, "That me - MY SHOES, MY SHOES!" when she saw the Hallie shot. I love the pink boots, too. Is Hallie teething? Emy's been walking around chewing on her fingers, I'm wondering if she's cutting the 2 year molars early - I see her in that same pose as Hallie often these days.

I think she is teething. It's so hard to tell with her since she's such an oral-stim seeker, but she's been on a kick of brushing her teeth five to ten times a day, is sucking ice like crazy, was chewing on her crocs (ewwww) and of course has all of her toys in her mouth (at once, if she can arrange it). She's still missing her canines, so my bet is on those, and that 2 year molars will be late and hence prolong this awful process further.

The happy news is that she has been eating chunks of goat cheddar and loving it. Let's hear it for a real food group and consuming 50 calories worth of food in a half ounce rather than a 4 ounce pureed serving!