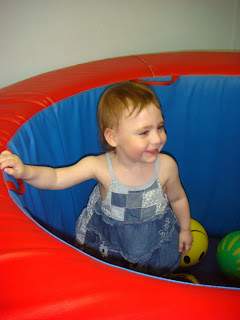 Ami took Hallie to her first Movers and Shakers Class yesterday at the awesome new Philly Kids Gym and Hallie had a blast.

The gym itself is very well equipped and runs circles around the OT gym she was using (too infrequently for her taste, and ours) at private speech therapy. Ami recounted that, as is typical, Hallie hung back a bit at first and assessed the situation, got to know the layout of the gym and familiarize herself with the other kids. Then she took off and had a blast.

She was a bit hesitant about the balance beam, which is interesting given Hallie's general penchant for climbing. My sense is that she's happy to climb in familiar environments and when she has something to grasp. The balance beam took Hallie to the edge of her comfort zone, and this is good for her. 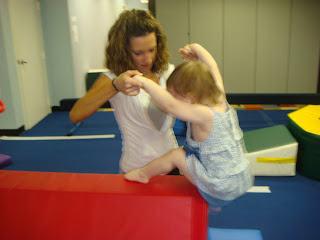 She did make it up, and stood on the beam: 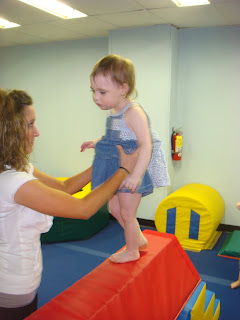 But almost immediately began to sign and say "All Done!" She's really learning the power of using her words these days, because the instructor got her down immediately.

Now the ball pit was a different story. Placing Hallie in it elicited this very happy face: 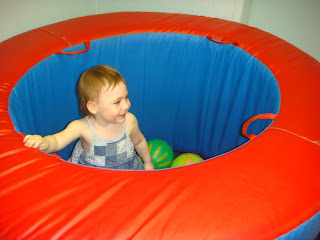 All in all--a great experience. And a nice way to start off a generally fabulous day. Hallie ate like a champ all day long, and even more exciting was that she not only deigned to eat the chunks of Goat Cheddar we offered to her, but ASKED for them by saying "cheese" over and over. She loved them! And, not only that, but not a single gag, either. She must have eaten about 3/4 of an ounce of goat cheddar over the course of the day, and a billion or so potato sticks, on top of her normal fare. Jenny, Hallie's EI Speech Therapist was totally impressed by this (and by Hallie's new communicative skills---our girl is definitely moving on from labeling to using language to ask for things and send us messages). Jenny's assessment of it is that the tons of ice cubes that Hallie demands on a daily basis have a very important therapeutic purpose: by putting them in her mouth, swishing them around, taking them out, and replacing them and letting them melt on her tongue, Hallie is desensitizing her own palate (maybe we should be paying Hallie for her speech therapy?). All in all, this makes her less panicked about stuff in her mouth and more willing to try different textures. Neat theory, and I think it holds water (so to speak).

In any event, we're all seeing a very different little girl this week, compared to last. Last week she was a mess: her color was off, she was gagging, she was all over the place in terms of her mood and more prone to destroying the house and having tantrums than to anything else. This week--beginning on Saturday, really--she's well-organized emotionally, doesn't mess up the downstairs by pulling out all toys, books, etc and throwing them around (indeed, she's been pretty neat for a toddler) and only has bouts of whininess when excessively tired. She's sleeping well, her nose and throat and breathing sound clear, and she's happy. What a nice change. This alone is a good signal to us that she's okay with soy. And, on top of this, no vomiting again yesterday. So, day 54 down and hopefully many more spew-free days to come!

The rest of this week is going to be hectic. Today is Hallie and Olivia's birthday, and we'll be celebrating (???) by taking her for her 2-year checkup, which is going to involve a blood draw (boo hoo) and a weight check (who can say where she's at---we're nervous about this, but not excessively so because she clearly looks fine). Then dinner with Josh, Nancie, and the boys.

Thursday, Aunt Ellen (one of Hallie's fabulous NICU primaries) will pop in and we'll begin the party prep in earnest, which shall continue through the big day, which is Saturday. Hopefully it'll be sunny, not too hot, and a great park/playground day (because that's the party venue). I just checked the weather, and they are calling 89, Partly Sunny, and a 40% chance of Thunderstorms. If all of you can channel your climactic karma in the direction of holding off those storms until 5pm or so, we'd really appreciate it! We have a very special day planned for our little girl and we don't want it to rain on her parade!
Posted by abby at 6:23 AM

haha - ya, the ball pit is always good for a smile. Arianna would walk on the balance beam when we held both hands but trying to get her to tumble was another story! We're starting up gymnastics again this fall and hope she wants to participate a little more then!

Big happy birthday to Hallie, Olivia and their moms!!! Its hard to believe 2 years can go by so fast huh? I swear, things hit hyper speed when Ari hit 2 and she's developmentally exploded since then... definitely a different kid and I"m so happy to be able to witness it as it unfolds.

Thinking of you today.

Happy, Happy Birthday to the girls! We'll be hoping for beautiful weather for your Saturday celebration.

we're a day late because we are a little distracted here under the Big Top. Happy, happy birthday Miss Hallie and Angel Olivia!!!
lots of virtual hugs from us to you.