I think it's safe to say that Hallie is pretty into 'dress up' these days. She loves to try on our shoes (and even socks....she had me help her put on Sharon's socks today and thought that walking around in them was just grand. I must say that they went very well with her princess outfit, courtesy of Cousin Hannah, though I still think that the highish-heeled princess shoes that match the outfit do look a tad bit better with it).

Anyway, she's always into trying new looks, and this has got to be one of our recent favorites: 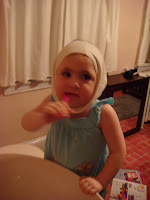 Yes, those are little panties on her head. She really did enjoy wearing these around for a while before getting ready for bed!

So, to indulge her new passion, I decided to order her an orange and black tutu for Hallowe'en (she'll pair it with something spooky, or just a bit crazy, I'm sure!). She is totally in love with Hallowe'en and everything related to it (she often asks to wear her various pairs of Hallowe'en socks and, quite literally, every book related to Hallowe'en that she owns (four or five, I believe) are in shreds because she needs them to be read to her, and must chew, pull on and rip them as often as possible). So, given that Hallowe'en is kind of a year-round holiday in these here parts, I thought a nice tutu would go over quite well.

Indeed, it appears to have done just that: 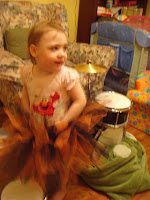 But far be it for our kid to wear a tutu only in a conventional way. It serves just as well as a wig, or even more fetchingly, as a boa. 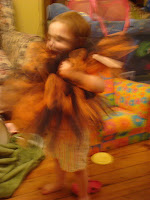 Quite the diva, our girl is!

(And, Hannah, I promise that there are pictures of Hallie in the princess dress....they just haven't made it onto my computer yet since a certain toddler I know appears to have hidden the camera again).

Speaking of which, Hallie has expressed a heightened interest in looking at herself in the mirror (was always fun, but is now even more fun) and in pictures on the camera and my computer. And, now, instead of calling herself "Hallie" she says "Had-dee" which is totally cute. She still doesn't answer the question 'What is your name?" but that'll come soon enough.

And otherwise Hallie's language is getting better and better all the time. Her articulation is much clearer, she is using many many more words, and she's much more interactive with everyone. We're pretty darned pleased. On top of this, she is practicing signing the alphabet (and not just saying the letter names out loud) and has begun to trace the shape of english language letters in the air. Finally, she also knows most of the alphabet in lower case. I suspect we'll find out that she knows even more than this once she can communicate with us more fully but suffice it to say: we're very impressed.

We're also impressed that she's doing a bunch better this week relative to the last couple. The allergist put her on a pretty hefty dose of zyrtec (5 ml/day) instead of the periactin and it seems to be helping. She may or may not have a cold on top of this---hard to tell still---but we've been giving her the flovent and atrovent twice a day just in case. We're still off of bananas and taking it generally slow with the feeding, but she's now up to 99 days vomit free this year, and we're hoping that 100 is just around the corner.

So, in the spirit of Hallie reaching new heights, I'll end this post with this picture of Hallie climbing onto the arm of her chair (no doubt so that she could get at something forbidden that we'd hidden away in the pack-and play). 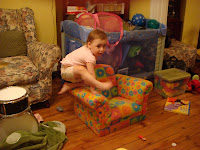