These are just the ones we took earlier this week, but I figured that if I didn't upload them now, I never would.

Owing to the lighting and the water and such, most of the aquarium pictures came out 'artsy' but quite wobbly-looking. These were the best of the school: 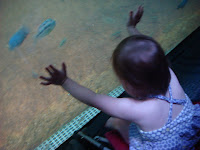 Notice how Hallie is just as interested in the face painting on the nearby toddler as she is in the fish swimming around in the tank. 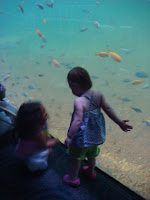 I do think that the aquarium did make an impression on our girl as she has been signing 'fish' (and saying FISHEEEEEE) furiously all weak during Dorothy-related segments on Sesame Street. She's also been obsessed with playing the Elmo world rhyming game on my computer (at PBSKIDS.ORG) and saying "Dorothy" (or her approximation thereof) over and over. Not that she really plays the game...she has yet to figure out the trackpad on my MacBook and just pounds its poor (and quickly disintegrating keys) furiously.

In the next pics, you see her eating a banana. 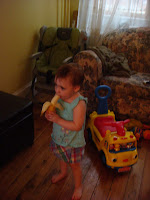 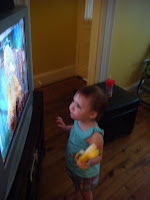 She ate perhaps another 1/16th of one again today. She does pretty well with it, but just doesn't eat much in any conventional sense of the word 'eat.' She prefers to slurp down her purees rather than chew solids. We're hoping the chewing of solids is a skill that kicks in at some point. She can do it...I just fear that she has little practice and is a bit lazy.

We're still not sure what to make of the blueberries. I gave her perhaps an ounce of blueberry/apple puree at lunch today, and she 'urped' (not a real vomit, just a few mouthfuls) after her nap today. "Nap" should be qualified here: she was down perhaps 45 minutes total. I am not sure if she woke up because she had a tummy ache (I do wish she could tell me) or if the phone ringing downstairs (it was a pesky robocall) disturbed her sleep. But it was a bit disheartening to watch her first get the hiccups (always a sign of reflux), then watch her reflux into her mouth, then watch it come up. She was on the stairs at the time and I grabbed the closest vessel (the kitchen sink of her play kitchen) but caught perhaps a third of the mess. It's clear her reflux is acting up (she's had the hiccups a bunch over the past few days) and that she is constipated, but it's not totally clear that this is an allergic reaction. I think we'll give the blueberries one more day and if we have a repeat performance (4/5 of the past days have been vomit-full days...just once a day, but still more than is typical of Hallie when she's not reacting to food), we'll pull the berries and maybe try them again in a few months. It's hard to believe that we've hit upon the only 6 foods this kid can handle, but that's the way it seems right now.

We're not sure where to go next in our food trials. I think we'll take a few weeks off to maybe get her over the teething we suspect she is doing (that always provokes a reflux flare) and to give the two people who will be filling in for Ami while she's on tour in Texas (she's a nanny by day and a musician by night) a bit of a break. Ami also needs a break (I hope she gets one in Texas!) and, like us, is disheartened by our latest bout of vomiting (it's been two- three weeks now that we are stuck in this cycle). And, like us, she pushes through because what else can we do? I suspect that Hallie feels the same way, but she just can't really articulate this to us at this stage of the game.

Anyway, off to bed since it's plenty late. Ami watched Hallie tonight while Sharon and I went to a Phillies game (we lost in extra innings...deeply tragic but alas it is the end of the summer and we need to head into a downswing if, as usual, the home team is to give up its first place position and manage to do in an otherwise stellar season). I think this is the final date night of the summer (very very tragic). The two of us have gotten used to hanging out again, but we're soon going back to the traditional schedule where we only have Ami while I am at work (AAAAAGGGGGHHH....I HATE THE END OF SUMMER). Sadly, while our budget sort of accommodates a nanny (do we have any other choice for our former micropreemie who has massive food allergies and doesn't eat in an age appropriate manner? Not really. We're just lucky we're able to afford to do this rather than send her to daycare), our budget doesn't really allow us the extra hours during the school year for babysitting at night on top of Ami's normal schedule. So we'll be looking forward to winter break for our next date. Hopefully Sharon will be in good health, big with child, and not on bedrest. Dates on bedrest are not precisely what we have in mind for December! But heck, that's a lot better than some of the alternatives we can think of and which we prefer not to mention!
Posted by abby at 1:16 AM