Life with the Girls

I'm being a bad blogger again, but this time I have some good excuses: two kids; no nanny (our nanny quit the day Sharon and Lea came home from the hospital); lots of laundry; many dishes; five therapies a week; and a bunch of red tape to negotiate in the preschool/3-5/insurance coverage for Hallie's dental/ENT/GI surgery next week go far in explaining why it is that I am spending less time blogging and more time scrambling.

But I don't want to let life get too far ahead of our chronicle because, as it turns out, this blog IS our baby book. Let's just hope that the internet doesn't follow the economic markets down the tube...

OK, so where to start? I guess I'll begin by addressing the several queries we've had about the pronunciation of our girls' names. Now this is an interesting matter for us. We chose Hallie's spelling because it seemed fairly foolproof: The way we pronounce it is "Haa-lee" (as in Halle Berry) (Please excuse my made up pronunciation system; that's one of those technical details I never quite mastered in school). We aren't huge fans of Hay-lee around here and figured that, by spelling it in the manner in which we did, we were less likely to get either that or "Hall" (which might have been the default pronunciation of Halle, were it not for the famous actress namesake). The reality of the situation couldn't be further from the truth: from the very start a full half of all people who see Hallie's name in print pronounce it with the long "A" sound, even when we correct them (either gently, by pronouncing it in the manner in which we believe the name should be pronounced or overtly, by telling folks directly that they've erred in the pronunciation. Usually they ignore our corrections and persist in pronouncing Hallie's name however they want to. It's kind of annoying).

Given this situation, we were cognizant of the pronunciation issue when we chose Lea's name. Now, there are clearly many ways to pronounce Lea. In Hebrew (a language in which I am still generally fluent, having studied it from age 5 to 18) the name would be pronounced "Lay-ah.". The same is true in French and Spanish. A second option, perhaps favored in the UK. would be to pronounce it "Lee" (which is how the word "Lea," which means meadow, is pronounced). But, we like the pronunciation "Lee-ah." We just left the "h" off. (In the interest of full disclosure, Sharon wanted us to choose the Italian spelling "Lia" and I was an advocate of the American spelling "Leah" for two reasons: 1. we are many things in this family--including Jewish, Irish, German, Ukrainian, Hungarian, Romanian, and perhaps Polish; add to this mix Donor 1876's English and Swedish background. But we are not Italian. And 2. I could easily hear the schoolyard taunts of "Lia Lia pants on fi-ah" and wanted to avoid this at all costs. So, in the spirit of compromise we arrived at the spelling "Lea.")

Anyway, it does seem ironic to us that the only one of our children whose name will never be mispronounced is Olivia's, whose name is, sadly, least likely to be used regularly by anyone but us. Sigh.

Lea is a very easy baby and we are very grateful for this. She is generally a good eater and a good sleeper (she has already gone for stretches as long as five hours at a time of sleep, which is amazing). She was having a bit of a problem of choking while nursing at first but Sharon figured out quite quickly that this had everything to do with Sharon's abundant (one might even argue overabundant) milk supply. So, with the help of a newly acquired hand pump (the Medela Harmony), Sharon's managed to mostly take care of this problem. Pumping a few ounces of foremilk (which was also making Lea a bit gassy and colicky) has mostly alleviated this problem.

We suspect that Lea has put on a bit of chub this week (we'll know for sure tomorrow when we visit the ped's with both kids). She is certainly more alert for longer stretches of time; and her right eye, which had been sort of oogy and crusty looking, is much better and she can now open it more fully).

Here are a few recent pictures of Lea that Sharon took with her iPhone: 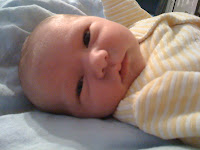 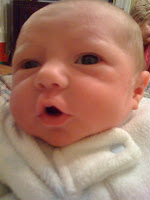 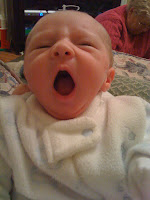 And here's one of me snuggled with Lea: 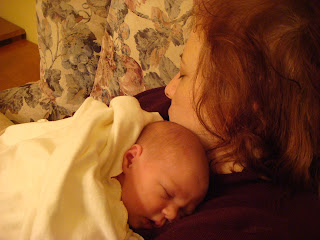 Hallie has been a great older sister so far. She still mostly calls Lea "baby" but clearly knows her name and uses it from time to time (and pronounces it beautifully). And she is very into kissing, hugging, and caressing her little sister: 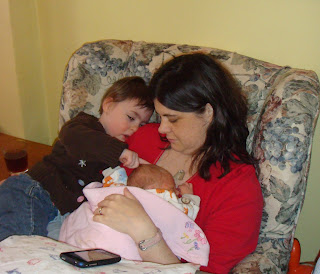 She even got to hold her! 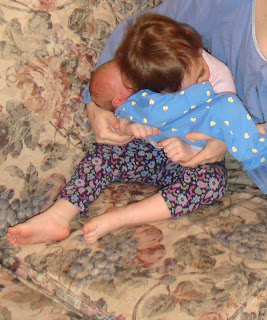 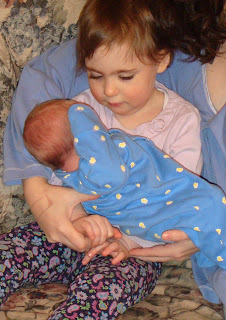 Hallie also loves returning Lea's items to her; any time Lea's hat falls off or there is a stray blankie around, Hallie will bring the lost object to her sister and try to put it in its proper place. It's too cute.

By and large, Hallie's been doing well. She's been suffering a bit from cabin fever (alleviated by the decent weather of the past couple of days; she was really going a bit stir crazy when it was icy and freezing cold around here last week). We've been a bit distracted around here of late (see opening line of this post) and I think Hallie has sensed this, but she's been pretty good about things.

Meanwhile, her eating is going ok. We've managed to get her to eat a little bit of bread and toast (but heaven help us if it is dipped in anything or has any kind of topping, like goat cheese. That has proven to be the occasion for a major emotional meltdown of quite amazing proportions). Even more significantly, Hallie is eating fish: her record so far is one fish stick at a meal and a half ounce of grilled salmon at a meal. This is still rather slow going (the kid is a human Vitamix blender...she has to chew every mouthful until it is a complete puree and this takes a while) and she's not eating anything that resembles a normal toddler portion quite yet, but compared to where we were a few weeks or a month ago, she's made pretty major strides. Her feeding therapist, Barbara, feels that a lot of the issues Hallie's dealing with are sensory and behavioral at this point (where 'safe' foods are concerned; this in no way applies to the problems Hallie has with foods that make her sick and, interestingly, the behavioral stuff that we're seeing involves a lot of aversive techniques but not vomiting. It's been a good long while since Hallie has vomited at any meal).

That said, February has not been as spectacularly vomit-free as was January. Hallie's only had three spew-free days so far (out of ten) but that's okay; we're still making progress.

Anyway, I'm too tired to go on for much longer; I need to be up early to take Hallie to gym class and then off to three (!!!!) doctors' appointments (the anesthesia pre-cert, the dental consent visit; and the peds) so I need to cut things short. But I'll leave you with a couple of images of Hallie eating toast and one of Hallie looking super cute and very much like a kid and not a toddler at all): 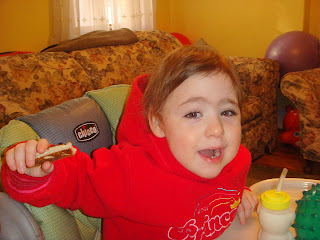 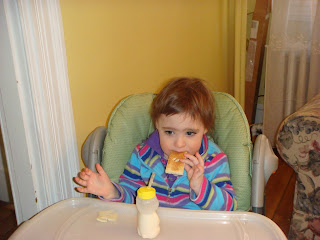 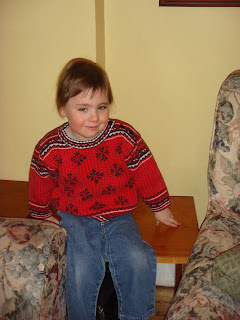 SHe is getting so big! Isn't it scary how quickly they go from looking likes toddlers to regular kiddos! Lea is adorable too! Hope Sharon is feeling well! ps-sorry to hear about the nanny...sucks!

Oh. My. Congratulations, that picture of Hallie with her head buried on her sister has proven that my reproductive instinct isn't COMPLETELY shot. ;^)

The pictures are making me all mushy. Awwww.

Sorry about the nanny :(

I've been stalking to see how you all are doing! I'm sorry to hear you lost your nanny! It's great to see Hallie doing so well with Lea. (As you know, our transition did not go as smoothly and is still a work in progress!) Good luck with all your upcoming appts!

Complete mush over here too! I'm amazed that Hallie is eating fish -- that's awesome. And toast too! As for "this food must never touch that food or else the world will end!!!" -- well, that sounds kinda familiar. Ordinary toddler behavior: ain't it grand?

I love the pictures of Hallie with her baby sister. So so sweet.

I had actually thought Lea was pronounced "Lay" -- glad you clarified!

Thanks for the pronuciation clarification!! If it makes you feel any better, I think I was saying them in my head how you indended... so the spelling worked, at leat for me. They are both beautiful girls with beautiful names.