The Love of Siblings

I took Hallie to Pennsylvania Hospital to see Mommy and meet her sister Lea on Sunday. Even though Sharon was coming home on Monday, it seemed like an okay thing to do. Of course, we were a bit concerned that seeing Sharon in a hospital bed and obviously unable to get up and move around would upset Hallie. Hallie is not a big fan of hospitals, for all of the obvious reasons. The one time we stopped into the PETU for Sharon to be evaluated earlier this fall, Hallie was devastated. Even though the ultrasound technician wasn't doing anything to Sharon, who was still wearing mostly street clothing, Hallie had a complete meltdown. And then, this past Thursday, when Sharon came home from the same unit wearing a hospital identification band, Hallie literally recoiled in horror. She knows what these are and their very sight inspires fear. So I had a bit of trepidation when I set out with Hallie in the stroller.

Indeed, Hallie's first response to seeing Sharon was one of sorrow tinged with relief: 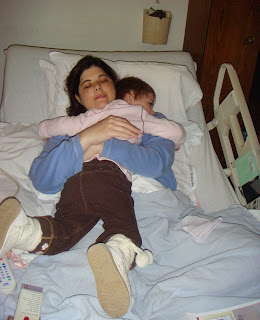 Hallie could not get close enough to Sharon and was uncharacteristically still when she draped herself on top of mommy and held her fast.

But a couple of things really helped Hallie adjust. First, there was meeting Lea: 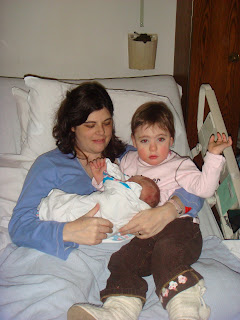 But her brother Jake's presence in the room had an even great impact on Hallie's mood. Jake's mommy Gina drove up from Central New Jersey to introduce Jake to his newest and youngest sister. (She also took a grand tour of most of the hospitals in the immediate area, stopping in first at HUP and CHOP in West Philly before locating Sharon's cell phone number and getting directions back to Center City).

Here's a shot of the three siblings and Sharon: 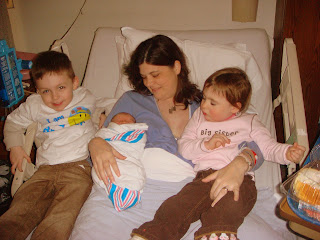 And here's a lovely shot of Gina and Jake with Lea: 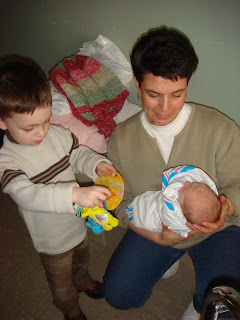 Of course, the highlight of the visit for the little ones was racing around the halls of the maternity floor chasing after the hand 'balloons' Gina had made for the kids, peering in at all the babies in the nursery, and drinking lots of water from the cooler. The kids really did have a blast: 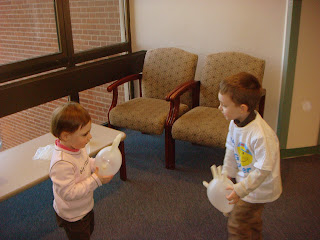 I am not sure what the other folks hanging out on the floor were thinking, though, when they heard both of the preschoolers calling different women 'mama' while wearing 'Big Brother' and 'Big Sister' t-shirts. Jake and Hallie look obviously related, but the arrangement must have seemed odd, though no one said anything (Gina thought that there might be an issue when Jake called her 'mommy' in front of the check-in desk person who was signing in a little boy who was going to visit his newborn sister). As confusing as this all might be to others, we really do love our extended family relationship with Jake and Gina and are thrilled that our girls are going to get to grow up with an older brother with whom to play (and, at least, in Hallie's case, adore and admire).

On Monday, after a bunch of paperwork; a couple of checkups for the girls (Lea lost a little weight, but not too much, and was down to 6 lbs. 2 ounces. Her right eye had goop in it and was crusted over and giving her the look of a baby pirate and her bilirubin levels were borderline; not high enough thank goodness to warrant a stay in the ICN but just high enough to demand a re-check; Sharon was in pain but nothing unexpected given the severity of her tear); and photographs (we have yet to look at these and see if there are any worthy of birth announcements), we packed up and got Lea bundled up for her trip home: 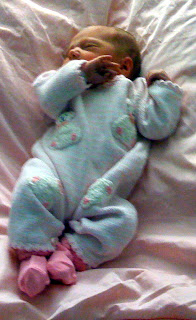 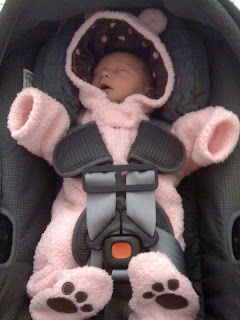 It was great to have a take home baby this time around and leaving the hospital felt very different than when we did this with Hallie in October 2006: 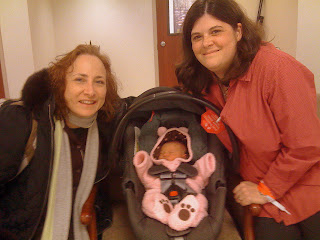 Hallie was napping when we got home, but soon woke up and joined all of us downstairs. She is taking very well to being an older sister. She is thrilled to hug, kiss, and love on Lea. She also has been doing a lot to help out. If she sees Lea's blanket sitting around on the couch or changing table, she'll return it to Lea and more than once she has tried to put Lea's hat on her head. Hallie really is a gentle and empathetic little girl and so we really do think this transition will be more or less easy. And, of course, she's thrilled to have all of us around at home right now. 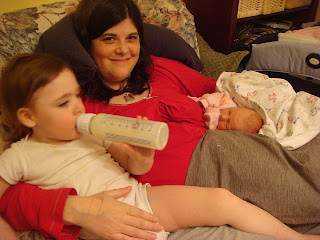 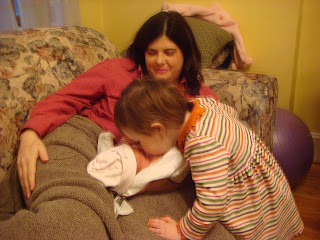 And I suppose that the only signs of regression that we've seen so far in terms of Hallie's behavior can be summed up by this next picture. Apparently a baby carseat makes a lovely and comfy toddler barcalounger: 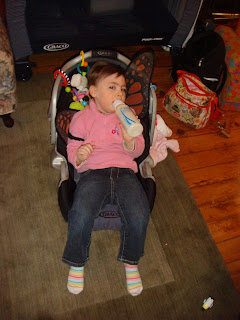 Oh the first picture of Hallie and Sharon is just the sweetest. The love just jumped out of my computer. Spilled all over the floor.... I'm gonna have to get a mop.

Oh, hooray! Hope Sharon is healing well, and they are both SO CUTE. I simply cannot get over how much Hallie and Jake look alike - can't wait to see if those genes come out as strongly in Lea, too!

*Sigh* The picture of her loving on Sharon is so fantastic!! Such a genuine picture.

Hope everyone is settling in nicely at home!

Welcome home Baby Lea! You were just born into an amazing family!
Congrats again you guys!

what a sweet big sister!

Jake has not stopped talking about "Baby Lea" and his "bigger little sister", Hallie. The adoration absolutely goes both ways!!! We, too, feel so very lucky to have you all in our extended family and look forward to the many, many memories yet to be made together!! Hugs and kisses from Jake and I!!!!!

Oh how wonderful to walk out of the hospital with your baby only a few days later! It must have been surreal.

I have to also say that I think it is so neat that you have relationships with Hallie's (biodad? sperm donor? genetic contributor?)'s other (children? offspring?)and their family. What a wonderful extended family you are creating for her, and now, Lea. What a wonderful gift you are giving all those children and what grief you are saving them from later. What a beautiful example of what honesty can do in these situations. I think it's beautiful.

BTW - how do you say Lea's name. Is it like Princess Lea or Leeah with a long e?

I was also wondering about the pronuciation of Lea's name. My guess is Lee-ah... am I right? And, while I am at it... is Hallie pronounced Hay-ly or Hal-e?

I keep thinking to call you, but always at bad times. We want to come visit, but Alex has a cold. Maybe Wednesday or Friday next week? Also the picture in the car seat in the bear (?) suit cracks me up.

Awesome pics, what a beautiful family you both have!

Congratulations! What a beautiful family! Hope this first couple of days home have been easy. ;)

Super Congrats!! What a great ending to the pregnancy / beginning to Lea's life outside the womb!

Too cute! I'll bet it was almost surreal to bring the baby home with you :) She is darling and glad to see big sis doing so well.

Thinking of you and hoping your babymoon includes some rest for all of you. :)