A Day at the Zoo

While everyone waits for my long overdue preschool post (still in process), here are some pictures of our Sunday at the zoo. We met up with our friends Sheila and Alex and saw a few animals, but mostly just hung out (we got there late, which is par for the course of trying to get out of the house with one toddler who doesn't like to eat breakfast, one newborn who doesn't like her car seat, and one grammy who likes both the toddler and the newborn, and this on the day after we sprung ahead our clocks.

Lea was not terribly impressed with the zoo but did not mind the stroller too much (though Hallie took it over part way through the outing and Sharon ended up carrying Lea in the sling. Idiots that we are, we could not figure out how to install the Phil & Ted's second seat in the "captain's seat" position on the fly. I figured it out just fine once we were home and the pressure was off).

Anyway, we had a great time looking at leaping lemurs, eating lunch (Hallie ate about a slice of bacon---another new food---and some fries and even deigned to dip a few in ketchup when she watched Alex doing that with hers. Of course, she would not eat the dipped fries, but still).

Here's a lovely shot of Alex and Hallie: 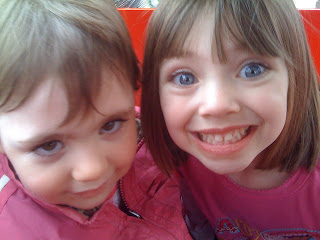 And here's one of Hallie brushing the goats (not sure if they were nannies or billies, but we love them all around here!) 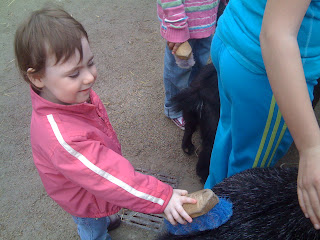 OK--back to editing posts begun but never completed!
Posted by abby at 6:00 PM