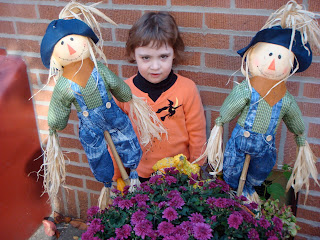 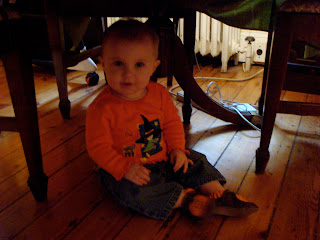 One of the wonderful things about the fall/winter holiday season is that the holidays fall in such proximity to one another that it prevents those of us bloggers prone to bouts of procrastination from doing so indefinitely. Anyway, that's the motivator for finally getting this post up and running and, in contrast to a couple of the most recent posts, this one is going to be heavy on the pictures and light on the commentary.

Halloween season got off to a roaring start with a visit to the Please Touch Museum for their members-only Halloween event. We went at the gracious invitation of Hallie's friend, Alex, who was extremely excited to have her little buddy with her for the occasion. The museum was packed with kids and, at first, Hallie found the whole thing a bit overwhelming (and overstimulating). But, after a bit of adjustment, Hallie settled right in. She began her visit with a fun carousel ride, which was of course fitting given her costume choice: 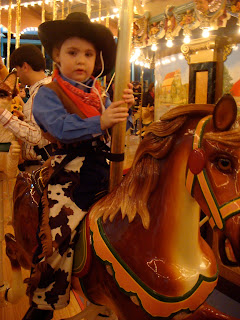 Then, after some time at a few of her favorite exhibits, Hallie, Sharon, and Alex and her mom, Sheila took in a puppet show. We weren't quite sure whether Hallie would enjoy the actual show as much as she liked the idea of it, but, as it turns out, she had a splendid time and talked about the puppet show for days. The characters included a pirate, and that's always a good thing. Hallie loves pirates and likes to walk around covering one eye with her hand or a spoon and saying "Ar Matey!" while holding her telescope up to the 'working' eye. I think there may have been a duck involved, too. I'm not sure because I was speed-walking Lea through the museum while she napped. Anyway, the puppet show was grand and then we repaired to the Please Eat cafe where we grabbed a dinner of pizza, apples, and juice boxes. Hallie did eat some, but the highlight of her evening meal was collecting the trash--all of ours and some of other patrons, too--and throwing it out. It was nice that she felt so comfortable walking up to strangers and asking them if she could toss out their garbage.

The next day we paid a visit to the Johnson Farm with Hallie's preschool. I don't know why I thought this--perhaps it was the homeyness of the name?--but I thought we were going to be going to a relatively small working farm with a little pumpkin patch and a tiny petting zoo, all scaled to the size of your average three to five year old. Instead, we got this. I should have known that any locale with a spiffy website and that sells its pies online would be the opposite of homey. The place was buzzing--with people and bees--which makes some great sense the weekend prior to Halloween. The huge hayrides were very full; the pumpkin patch was enormous; and there was a performance area set up that featured locale country acts; 4H dance troupes and the like.

It was also very very hard to find the other members of our group (we were, admittedly, a bit late, as is par for the course with us. The part of Medford, NJ where the farm is located is a great deal further than we thought and we needed to stop and pick up a pizza for Hallie's lunch). We did finally meet up with our fellow YCCAers--a few on the hayride and in the pumpkin patch and more at lunch time.

Anyway, the experience was pretty overwhelming for us adults, but Hallie seemed to have a pretty good time.

Here are the girls on the hayride en route to the pumpkin patch: 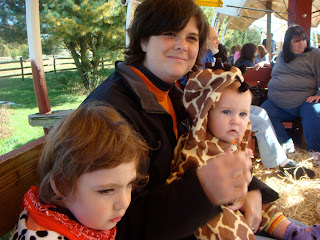 Here's Lea in the pumpkin patch: 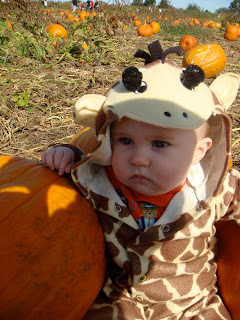 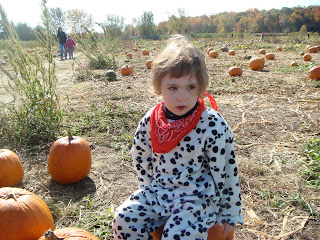 Here's Hallie trudging alongside Sharon, who was in search of the perfect pumpkins (more on this later). This took entirely too long and the kids were all a bit antsy. It didn't help that Hallie kept tripping over the pumpkin vines on the ground. 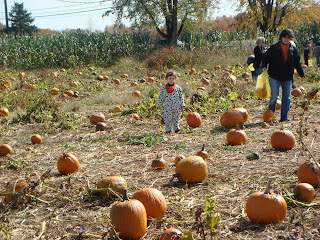 You can get a sense of just how big the pumpkin patch was from this photo.

And here they are on the way back: 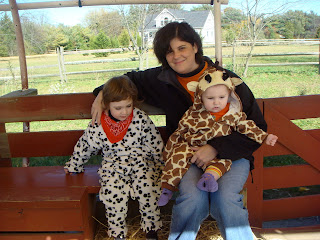 After lunch, Hallie was excited about jumping in the bouncy house (she LOVES these): 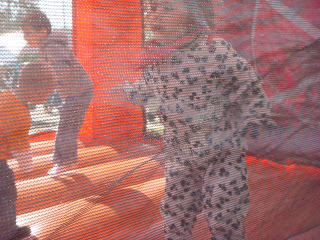 And she proved just as excited about visiting the animals on the farm. I'm pretty sure, given how many times Hallie returned for large handfuls of corn, that the pigs were quite overfed that day: 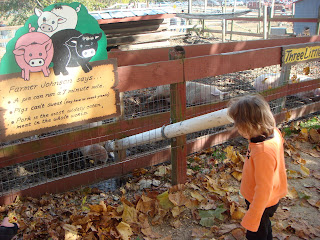 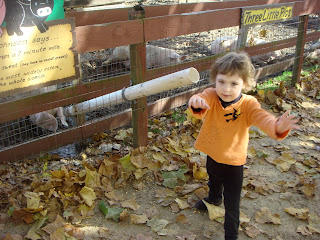 She also found the playground area to be pretty grand and had a wonderful time sliding through the PVC piping tunnel that they had set up for these purposes: 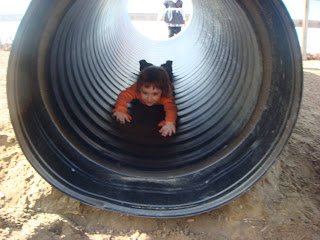 When we got home, it became abundantly clear to me that all that time that Sharon had spent in the pumpkin patch assessing the individual merits of each pumpkin really paid off. You see, she was on a mission. A couple of years ago, Aunt Laura had given us pumpkin decorations that she had made when the two oldest cousins, Sarah and Megan, were little. Even though Megan grew up not watching Sesame Street (since Sarah was too old for the show by the time Megan came around) and hence thought that Big Bird was in fact Big Yellow Chicken, she definitely knew who these two guys were: 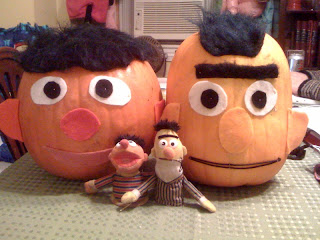 Hallie had a blast making them. We were very impressed at how much power of concentration and attention she brought to this art project. School is really paying off in this respect. Hallie was very proud of the final project. She was proud to pose the little finger puppets in front of their pumpkin likenesses: 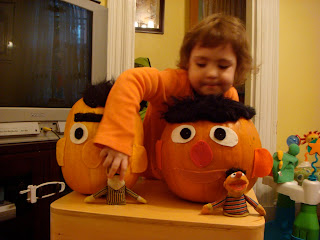 Lea also got in on the action: 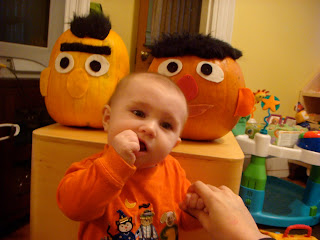 I think this is a fitting tribute to Sesame Street on its 40th birthday, don't you? 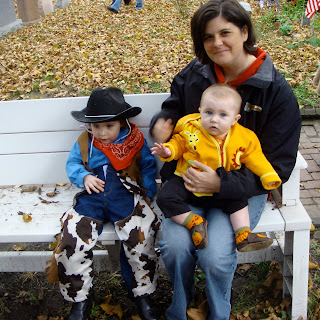 The next week brought the YCCA Halloween parade (see my Pumpkinhenge post above for more details on this...) and the main event, the big day itself.

We were thrilled because our friends Anne, Eliza Grace, and Bessie (Anne's mom and Eliza's Nana) came down to join in the festivities.

When Eliza decided at the last minute to jettison her Native American garb for that of a ballerina, Hallie followed suit. Soon, our two little dancers and their entourage were ready to hit the neighborhood: 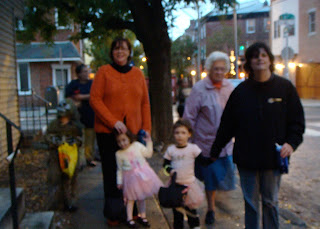 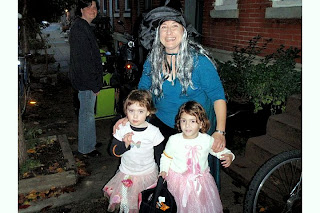 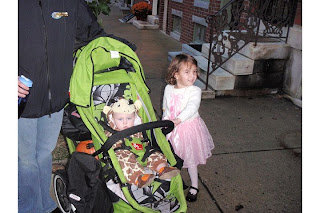 The girls both proved to be very quick adopters of the trick-or-treating ritual: 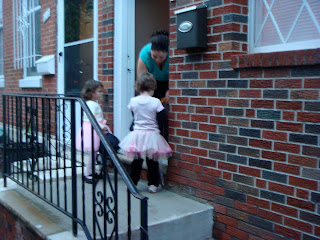 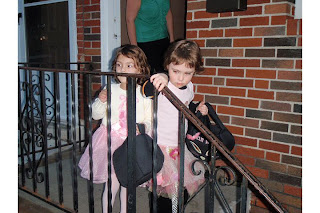 Here's a nice shot of Eliza and her Nana trick-or-treating: 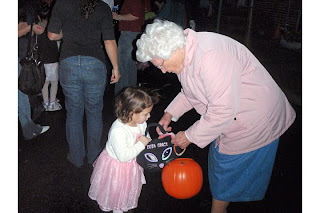 While collecting candy was definitely fun, what's even greater about Halloween in our neighborhood is that there's this one block where the residents close off the entire street and everyone, regardless of whether they have kids of trick-or-treating age, gets into the holiday spirit. Not only do they give out vast quantities of candy, but they also set up craft tables where kids can decorate their own gourds; color pumpkin or witch or similar cut outs with markers; watch as their balloon animal of choice is blown and twisted; or oversee the production of pom-pom spiders. Our girls had a blast doing all of these things: 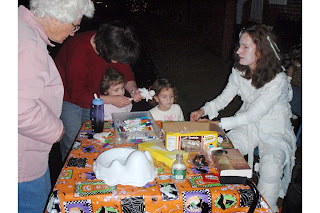 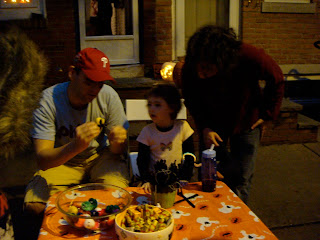 The whole group had a grand time and we got home to our place in the nick of time to avoid a major downpour. After a nice visit, our friends headed back to New Jersey.
The next day, Hallie sampled some of her loot. It turns out that, though she doesn't eat much at one sitting, she very much enjoys chocolate (Hershey's bars, Kit Kats, and Reese's Peanut Butter Cups all pass muster, even if she takes a few small bites of each before moving on, and Hallie's fairly willing to sample--or at least open--anything that comes in a wrapper that might pass for junk food). She also finds cheese balls (but apparently not cheese puff sticks) quite delicious and has a fondness for bats-and-jacks pretzels. Now if you could only pass off green beans as junk food by giving it a pretty colored paper wrapper...
Anyway, that about sums up our Halloween fortnight!!! But even though the holiday is over, costume-, pretend-play and some candy eating live on (though not much this week, since Hallie's been home sick and not feeling up to eating much; probably it's H1N1 but we'll never really know for sure. Whatever it is, the fever is down and has been gone a whole day now and we've gotten away without any respiratory issues whatsoever, so we're pretty happy right now. Just two days of vomit, likely due to antibiotics to treat a suspected ear infection. So we're now up to 230 days without vomit this year for those of you still counting).
Posted by abby at 11:55 PM

As a lover of cheese puffs I can assure you that cheese balls are a completely different breed of junk food! So perhaps Hallie has a discerning pallet?

why, that's the cutest cowgirl i've ever seen.