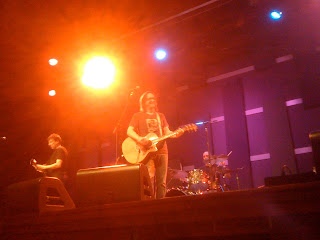 Last weekend, we took Hallie, Lea, their brother Jake, and our friend Eliza Grace to see Ralph's World at the World Cafe's Peanut Butter and Jam kids' series. Hallie became quite enamored of Ralph's World this summer when her preschool class learned (and later performed) two of his classic songs, "Happy Lemons" and "Surfin' in My Imagination" (Hallie calls the former "Lemonade Song" and the latter "Surfing Song." Hallie gave Jake a CD/DVD set of some of Ralph Covert's classic songs and we later purchased her a copy for her own enjoyment. This has gotten a lot of airplay at our house and Hallie was suitably thrilled to be able to catch Ralph in person.

Ralph was greeting the kids as we arrived and Hallie got a nice big hug from him (and confirmation that he was going to be playing the "Surfing Song." 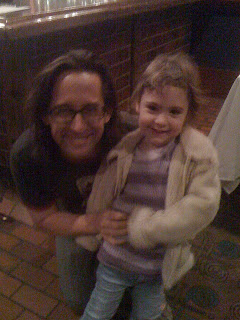 Hallie, Eliza, Jake, and Lea all had a ton of fun during the concert. Unfortunately, some pretty silly parents (that would be us) forgot our camera at home and, as it turns out, the iPhone does not take great concert shots (unless you like the quasi psychedelic). Hence, we'll re-direct you to Eliza's blog to see just how much fun the kids had.

We did get one sort of OK picture of Hallie, Lea, and Jake all in the same frame: 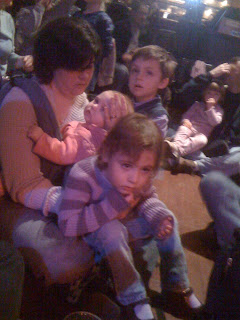 Notice the intense look on Hallie's face. As it turns out, she was fairly subdued (when not bopping with Eliza) not only because she was coming down with some sort of preschool crud (perhaps the flu, perhaps not...all we know is that she ran a fever from Monday through Wednesday of last week, recovered on Thursday, and was back to her usual fun self by Friday). She was also really taking in the whole experience. When I picked her up from school today, a full eight days after the event, she was still talking about the concert. At first I had no idea what she meant when she told me, "I go to concert." I asked her aide, F., whether the kids were planning another concert and whether they had rehearsed a song today. F. responded that they had had music, as usual, but that nothing special was in the works. Hallie apparently understood my confusion and elaborated, "I see Dinosaur Song. I see Puppy Song." And then she began to sing the lyrics to the 'Puppy Song' for me, just in case I still had no idea what she was talking about. Anyway, I totally got it and told her aide what was going on. Hallie smiled very broadly in response to what I said to F.

As is the case with most songs that Hallie loves, she knows these lyrics by heart. She also can replicate basic choreographic moves that she's seen performed in person or on television. Her mastery of song and dance is rather impressive. Now, were it not for the fact that the kid has a paralyzed vocal cord that makes her voice little and raspy and some delayed gross motor skills that impact her capacity to dance, I'd say that she could easily aspire to a career in theater and dance. Even given her limitations, I'm not sure I'm going to rule this out just yet. The kid has music in her genes (literally, since her donor's family is quite musical, and professionally so) and clearly loves music and performance.

This all points to something else that's quite important: apparently Hallie does have some pragmatic language skills, after all. We just all need to know her well enough to provide the context for her, and she'll let us know what she's thinking.
***

On a related, but different topic: Hallie has some cute new phrases that she likes to use. Among our favorites (and, by the way, she seems to be getting what we mean when we say 'favorite' since she now uses the word herself) is: "That's very too hard." She uses it absolutely appropriately, like when she cannot get a zipper started, even after she tries and tries to do so.

Sometimes it's pretty hard to understand what Hallie means, but with some work, I'm beginning to find that it is rarely 'very too hard.'
Posted by abby at 10:11 PM

I think she'll have a great time in the theatre (acting, singing, dancing, stagecraft, front of house)!

And it's great the concert was a talking point.