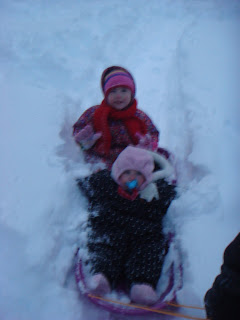 It snowed here in Philly pretty much non-stop from about 7pm on Friday night until a little after 2pm on Saturday. And this was no wimpy snow, either: while the original forecast suggested that the snow would be on the wet side and with an equivalence of 10 inches of snow per 1 inch of rainfall, they reported last night that, since the temperature here had dropped quite precipitously over the course of the day yesterday, we actually received 15 inches of snow per 1 inch of rainfall. What that amounted to was 28.5 inches reported at the Philly airport.

I have no idea what we received on our block inch wise, but this is what it looked like when we bundled the kids into the toboggan and headed out to the park that is (mercifully) just down the street: 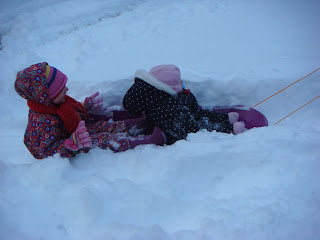 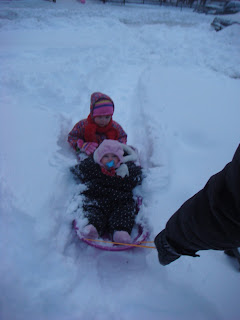 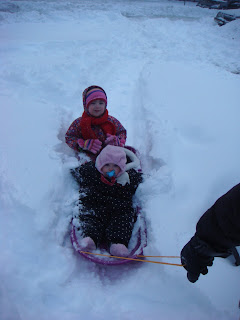 Hallie got the hang of sitting up in the sled as Sharon pulled it, but Lea was a bit perplexed at the whole thing. She ended up turning the toboggan ride into an opportunity to make snow angels: 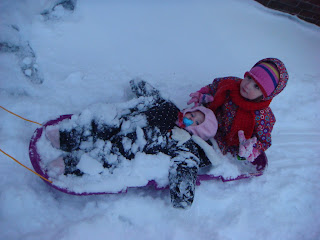 Hallie thought that her little sister was being hilarious: 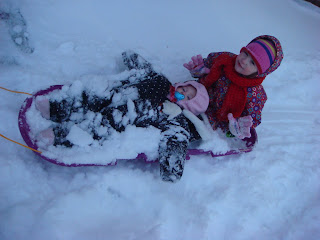 Ultimately (like after five minutes), however, it became apparent that Lea was not having a huge amount of fun in the toboggan and, when she ended up with a face full of snow (there were no real tracks carved through the park), I headed in with Lea and Sharon took Hallie for a few races around one of the tiny side streets in our neighborhood. Hallie, sensory-seeking speed demon that she is, kept wanting to go faster and faster and would have had Sharon at it all night.

When Sharon had had enough, they came back here and were playing in the snow a bit. Hallie pulled off her glove (she hates wearing them and the only thing that keeps her current pair united are the mitten clips I got for her). She grabbed some snow and it was so cold that it hurt her hand. And then she fell. So she came back inside in tears, but did have a mostly excellent time outside in the snow. And what's better, I think, at least on some level, is that she talked with Sharon at bedtime about how she was feeling when she fell. She also talked about how Zen (our kitten) made her feel scared when he got too close to her on the bed. All of this feelings talk is really excellent. Probably even better than the snow.

The sleds of my youth were little better than trays.

And, yes, feelings talk is excellent! We should do more of it.

Reading lots about care and neglect.

I am taking my sensory seeking speed demon skiing at the end of the month - we'll see how that goes but I think he'll love it!

And thanks so much for the supportive comments, I did order that book from Amazon and can't wait for it to get here!

I am quite jealous of your snow. Living in Canada snow in large amounts is a norm. It is February and still no snow here. We are so looking forward to sledding, snowman and I even don't mind shoveling our driveway. We will probably get a dumping in April thanks to global warming.
Have Hallie eat a mound of snow for Elizabeth it is her favorite delicacy.