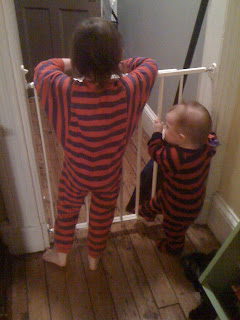 The kids and I are cooped up at home once again after a non-snow event shut down Philadelphia (and Hallie's school) today. I think we're a bit snow shy at this point (who wouldn't be given the number of inches of the dreaded white stuff we've received over the past few weeks) and so the city tends to close the schools a bit preemptively.
We did not get too much in the way of snow (maybe 4 or 5 inches, which used to seem like a lot) but the winds were fierce and it was quite frigid this morning.
Anyway, Hallie's been going a bit stir crazy given that she was home from school on Wednesday after she began to run a low-grade temperature on Tuesday night. That has resolved, but we're pretty certain that she is not feeling terribly good right now. Her sleep has been very interrupted (she woke up in the middle of the night or very early in the morning several times this week), her eating has been off, and she's been vomiting quite a bit lately. And it's not been just any vomit, but the old projectile, comes out of nowhere vomit. Our hunch is that she's not tolerating the chocolate milk that she's been drinking quite a bit of (for her---so several ounces a day) since last Friday or Saturday. As in the bad old days, it takes several days for her system to get overloaded, but when it does, look out. So we'll take her off of the milk and see if things get better/go back to the new, pretty tolerable normal.
Hallie did start back up in private OT this week and had her first speech therapy session with her new private speech therapist. Happily, both are in the same location (just a block from Sharon's office) and back-to-back appointments. But Tuesdays have ended up being crazy days for both Hallie and Sharon. They start out going to feeding therapy at 9am, then Sharon heads to work and Hallie stays at home until preschool at 3:15. Nadia picks up Hallie from school at 5:30 and takes her to Speech and OT at 6:00pm, Sharon meets them there (where she hangs out with Lea in the waiting room) and then everyone finally heads home when therapy is over at 7:30pm. What a crazy life! But if it helps Hallie with her pragmatic language, sensory integration, and fine motor skills, it's definitely worth it.
Meanwhile, Lea has begun to walk in earnest this week. Chasing after/seeking out Zen has been the big motivator for her. Apparently, on Tuesday, she walked about ten steps over to Zen to feed him a piece of bacon (she likes to feed all of us, Zen included). She's been toddling from one place to another pretty consistently and, while she still looks a bit wobbly and off kilter, she's definitely getting the hang of it. I can already tell that chasing after two kids running in two separate directions this spring/summer is going to be pretty challenging!

Love the PJ's and hooray for the walking!

I stiil jealous about your snow, here in Cnada the snow that we get lasts a couple hours and then is gone.
I don't think people who do not have children with special needs can even begin to relate to the busy lifestyles we live with all the appointments our children go to. It really leads to long tiring days for everyone.
I think you are right a meet-up at some point would be great as our girls are similar (Eliza included too) I think it would be great for the Mom's too.