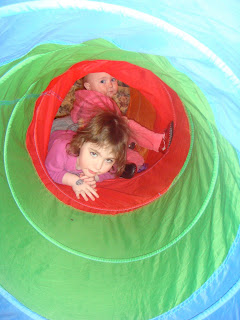 One of the things that the kids really enjoy doing around here is playing in various pop up structures. We bought Hallie a playhut with several tunnels that she had a great time turning into a ball-and-stuffed-animal pit; the 'house' sadly met its demise, recently, after some particularly active rough housing.

But never fear: we have lots of other play structures that have filled its void.

The favorite ones right now are a collapsible tunnel that we picked up at Gymboree and a pink princess castle that Hallie chose as a post-GI appointment gift at CHOP back in December. The latter requires adult assembly (it is kept standing by a series of complicated tent poles that are a bit of a pain to place in the proper location) but Hallie can grab the tunnel from the place where it's kept (behind our couch in the living room) and open and close it on her own (not that she really ever does voluntarily close it, but she could if she so desired).

Anyway, Hallie and Lea often have a blast chasing each other through the tunnel and Taylor, Renee and Kim's 20 month old, joins in on the fun when she is over for her weekly spaghetti dinner. Indeed, the tunnel chase game began when Hallie started to play "Where is Boo Boo?" Boo Boo is Taylor's nickname) one evening a few weeks ago. This game has now morphed into "Where is Lea?":


Here's a shot of Lea being quite silly: 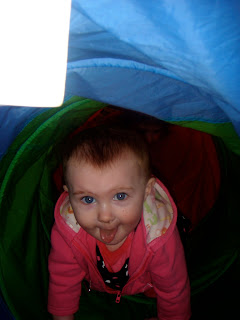 And here's a cute shot of Hallie and Taylor in the Radio Flyer wagon: 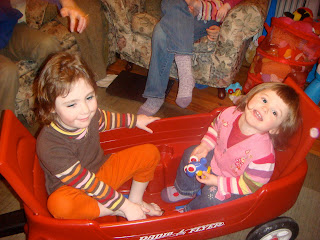 The three girls are so cute and enjoy each other so much. We feel lucky to have Taylor, Renee, and Kim in our lives!
Posted by abby at 7:39 AM