Spring is Here and Change is Everywhere! 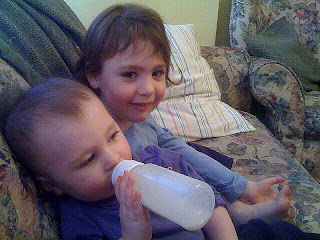 Today was another glorious spring day (well, not quite Spring, but almost). Everyone's health is on the mend: Hallie's pneumonia cleared up quite quickly with amoxicillin (thank goodness she is willing to take the capsules mixed into some applesauce); my cold has gotten better; and Sharon is on the mend after having been felled this past weekend by the same cold that prompted Hallie's pneumonia. Lea still has a super runny nose (and hates tissues, which is a pretty awful combination) and a bit of a cough but it sounds considerably better than it did yesterday. She is also teething (I think most of her bottom teeth in the back are poking through), and this cannot be much fun. And all of us seem to have seasonal allergies: mine are responding to lots of zyrtec and Hallie and Lea have non stop nose faucets and sneezing, but nothing that we're too concerned about.

Anyway, the kids got out to the playground on Thursday and Hallie had the opportunity to improve on her already not-half-bad tricycling skills. She has learned to steer fairly well and, while she needs a bit of a push to go uphill, she's doing a nice job of keeping her feet on the pedals. She's graduated from the little pink trike that she rode last year to the one that she received as an (overly optimistic) second birthday present.

Of course, as Hallie does, so does Lea. Lea has been super interested in the trike. At first she wanted to play with its streamers and the door to the little trunk that goes open and shut. But then she got more ambitious ideas: 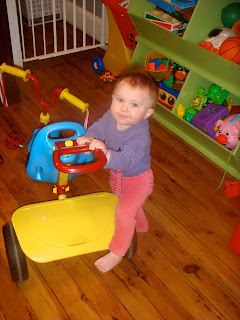 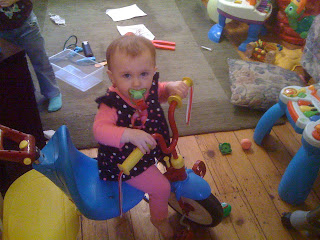 I suspect that, could her feet reach the pedals, Lea would be riding all over the place right now (which would be fairly hard to do in our debris-strewn and overly-crowded row house, but Lea is never one to be stopped by things that stand in her way).

On Thursday, we also took a late evening walk over to Whole Foods to purchase some more of the kids' most recent favorite snack, which happens to be on sale this week. This is a good thing, because even on sale, they are hideously expensive (2 boxes of 5 little packets for seven dollars).


Hallie and Lea love Amy's organic gummy bunnies. They tried them for the first time today and there's no going back. Unlike traditional gummy fruits, these have 100% of our vitamin C requirements and contain nothing artificial. They are also silky soft and easy to eat. Hallie would prefer to eat the red ones (since they taste like fruit salad to her. This is not something I can wrap my head around because the kid has never eaten fruit salad in her life, but I'm willing to accept it for what it is and move on).

This, of course, opened up the option of gummy vitamins to us, and so I picked up some while I was at Whole Foods yesterday. Even though they are made by the same folks, they are not nearly as complete as the Rainbow Lights Nutristart packets that we currently use -- I presume that this is because they are assuming that kids who can handle gummy vitamins are also eating a broad variety of foods, which Hallie obviously is not. But they do sell gummy veggie supplements, gummy mineral supplements, gummy DHA/RHA supplements, and the like. So I assume that we'll be investing in those nutriceuticals as well. Why eat real food when you can eat gummies, I ask?

After we were done with the store, I had the brilliant idea of calling Sharon, who was still at work (at around 7pm). It was lovely out, and I convinced her to finish up what was doing and meet me for dinner at a new barbecue joint that has opened across from Whole Foods. The setting is informal, there is outdoor seating (which was convenient while Lea was asleep and less convenient when she woke up and Hallie wanted out of the stroller, but we were easily relocated inside) and they had some kid-friendly options (mac and cheese for Lea and white bread and crayons for Hallie; Hallie did not consume the latter). Dinner was not an overly lengthy affair, but it was nice to get out of the house and out in public and I am happy to report that we did not need to evacuate in an emergency, either (those of you unfortunate enough to have had the opportunity to dine with us in years past--and even as recently as this winter when we went out for pizza with Aunt Laura and the cousins--know that dinner outs often end on an unsavory note for us that involves large tips and futile attempts to clean up puke. Last night was not at all like this, and so it falls in the magical category.

Anyway, this is all to say that it's been a nice week and sibling-altercations aside, the kids are super cute.

Here they are modeling some haberdashery that is more sized for Lea than it is for Hallie. (Thank you again, Anne, for the excellent hats and we definitely hope to not have to use them again this season!). 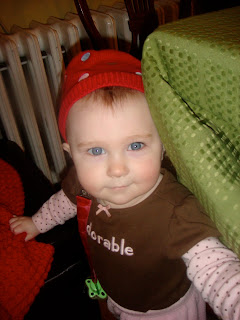 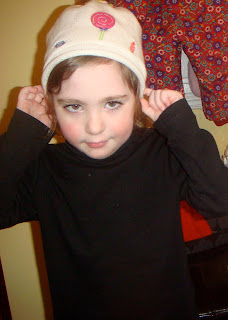 And, finally, Lea is really walking, as you can see in this video (sorry that it's so long):

We have organic sweets in our house too, mostly the jellies.

Great to read about the girls and their tricycling.

(I wonder if Hallie has tried trycling in the water yet? There is a big tractor-type machine that children often use).

And hooray that she got better from the pneunomia.