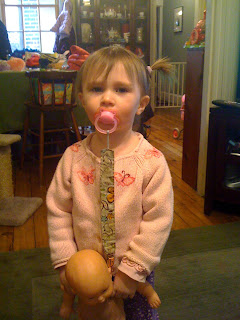 Lea loves her baby dolls, and one in particular, whom she has (appropriately, if unimaginatively) named "Baby."  Baby accompanies Lea on most of her journeys, including ones to school.  Keeping track of Baby is something that we do a lot of around here.  Naturally, we have applied one of our many Mabel's Labels to Baby's tush tag so that she doesn't blend in with the crowd of other naked baby dolls who reside at the YCCA.  (Apparently it is a lot easier for the kids to identify Baby than it is for us adults; Hallie and Lea frequently correct us when we hand Lea her second-favorite naked doll, who is named CoCo, when she's requested Baby). But sometimes we forget whether Lea has brought Baby with her to school and this can lead to all sorts of problems.  In one harrowing incident,  our nanny only discovered that Baby had gone missing once she had gotten the kids home from school.  Fortunately, she figured this out before the school had closed for the night and walked back the eight or nine blocks with Hallie and Lea to retrieve Baby. 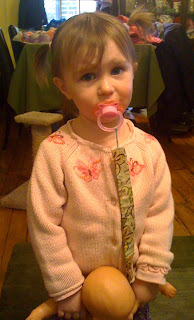 Otherwise, Lea's face might have looked a lot like this (apparently this melt down had nothing to do with Baby's absence and probably instead was related to one of us telling Lea, "NO!," which is not one of her favorite words. 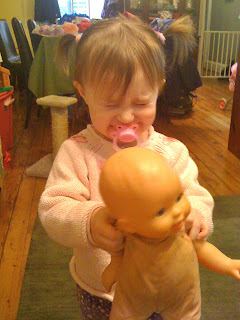 Lea is a fabulous mama to her babies, as you can see from this very cute but admittedly somewhat long YouTube video:

But I digress from the subject at hand:

On Sunday, Hallie, Lea, and I went out for a stroll in the stroller. Naturally, Baby came along with us. Lea, who fought naps all week during her Spring Break, really needed a rest and was asleep, clutching Baby, within seconds of hitting the stroller. Several people oohed and ahed over how cute she looked, with her arms wrapped around Baby.

We managed to go to the store and return home (with Hallie walking alongside the stroller most of the way, so we were going none too quickly) and Lea remained fast asleep. I did not monitor Baby's whereabouts.

After she awoke, Lea was refreshed and played raucously. We had a grand old time tossing balls; playing baseball with a drum stick and superball; dancing; bouncing on the chair and sofa; and all sorts of other fun stuff like that. Until bedtime. When Lea requested Baby.

I had no idea where Baby was. I had no idea what Baby's brand was, either. All I know is that I, and then Sharon and I, tossed the house upside down to locate baby. We were having a Knufflebunny moment.  There is a reason why Mo Willems has subtitled the book, "A Cautionary Tale."  We were clearly not nearly cautious enough.

Fortunately, Baby turned up in the heap of stuffed creatures that reside behind our couch.  And fortunately I pinned down her origin and identity.  I have a substitute 2006 Fisher Price Little Mommy, complete with snaggle toothed smile, on its way from Ebay.  I am dubious whether Lea would fall for the old switcheroo, but at least we're trying to avoid major childhood trauma.  And in the meantime, I'm investigating whether we can install a microchip into a plastic-and-soft-bodied Baby.
Posted by abby at 4:05 PM

Sam is also enamored with baby dolls. He is also very imaginative in his naming convention - his baby doll with a white fabric body is named "white baby" :)

You think just like me. "Get an extra!" Why did I ever think an extra blankie would work? Huh? Anyone?

Thank you so much for your comment on the blog. I have to tell you, when I started this developmental delay journey and started looking for blogs to follow - of parents that had been in my shoes - yours was one of the first I found. I've just LOVED following Hallie's progress :o) I also think your family may have been some of the early inspiration of "I can do this again," meaning . . . I can have another child, in spite of a traumatic, difficult first pregnancy.

I worry so much that if (hopefully) our second hits every milestone easily and on time that it'll be a little bittersweet. I worry that I won't be able to feel the joy I SHOULD because it'll be a reminder of how hard things come for Sam. Does that make sense?

Anyway, I'd love to message with you more about this journey, if you wouldn't mind (and we can both find the time).

Don't want to post my email here, but are you still a member of the Delayed Darlings board on Baby Center? If so, maybe you can send me a quick message there - I'm Samsmommy08.