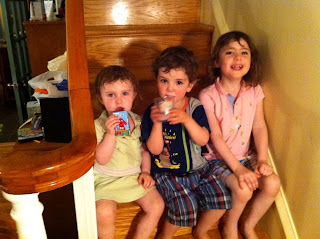 Last night we ate dinner with our friends Uri, Shira, and Eran.  Eran goes to school with Hallie and Lea and is approximately halfway between our two girls, age wise (he's about 3.5).  Eran made a very strong first impression on the kids:  from the moment he started school at the YCCA this fall, we've been hearing about him.  Hence we felt very happy/lucky to have begun to make good friends with him and his family this past winter.

Anyway, we were over at their house last night for a very fine dinner composed mostly of their yummy and fresh CSA (farm share) produce.

The kids had a great time wrestling around like bear cubs (Hallie insisted that we bring her pink pop up princess castle and it was a real hit with Eran, as she predicted).  They tore the place apart as only they can do (Uri and Shira insisted that most of the mess was Eran's and predated our visit but I've met our kids before and have seen their amazing handiwork, particularly in relatively new environments replete with unfamiliar toys that must.all.be.explored.at.ONCE!).

We also inaugurated Hallie's birthday season, which began at school with mini cups of Haagen-Dazs ice cream and party hats for the Rainbows (Hallie's group at school).  All of the kids were still wearing them and talking about the ice cream when I got there at pick up time.  Sadly, no one took pictures of this, but Hallie declaimed it, and the ice cream, to be the favorite part of her day yesterday.

Then, after a nice healthy dinner, we got out a small ice cream cake (half chocolate for Hallie and half vanilla for Eran, who despises chocolate) and sang and blew out candles again.  Hallie was very pleased, to say the least.  And she can now blow out five candles quite quickly, completely unassisted (this is a major change for her).  Being the really dreadful parents that we are, we have no pictures of this, either.

I might put some candles in Hallie's toast this morning.  Perhaps I can get pictures of that!
Posted by abby at 8:08 AM

Love the picture. Hallie looks so grown up, and I love the picture of Lea's pony tails below. Is the blowing easier because of the surgery?