We spent Memorial Day weekend hanging out with our friends Sheila, Brett, and Alex.

First, we took in the school carnival.  Hallie and Alex were thrilled to go on some pretty grown up rides without adult companionship.  Here they are getting ready to be swung wildly: 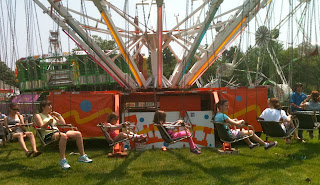 Brett did have to accompany them on their spin on the tornado: 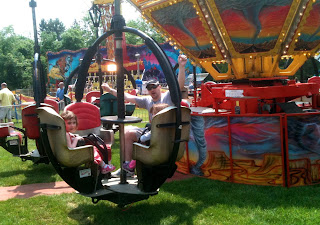 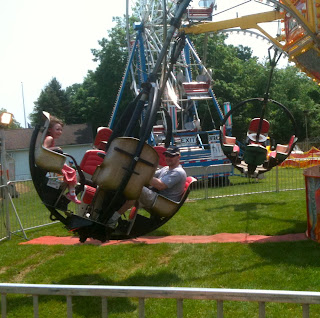 And, likewise, Brett was there for the ride on the "Scrambler."  This only makes sense since, as you will note, we cannot even see Hallie's face over the bar (though you might be able to make out the hair on the top of her head if you look real closely): 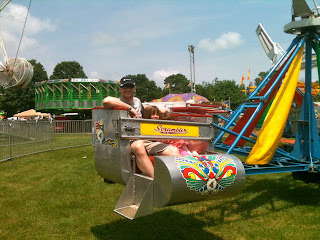 Lea, meanwhile, could only ride on one ride by herself: 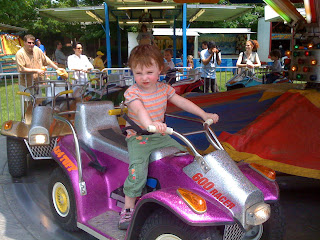 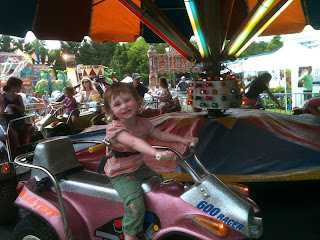 Sharon and I took turns taking Lea on the two rides that she could go on while accompanied by an adult (a pretty innocuous dinosaur ride and one other the identity of which now escapes me) but she was far from satisfied by these experiences.  She wanted to do it all, and particularly the fast, scary rides.  Both kids love roller coasters, speed, and height.  I am 100% certain that they do not get this from me (astute observers will note that it was Brett taking them on these rides, whilst I was manning the iPhone camera).

I did manage to sort of deflect Lea's ire at not being able to operate her own bumper car by taking her over to some of the game booths where we could win prizes.  Strategically, we decided to play a game which everyone won.  There's really nothing quite like shelling out six dollars for a dollar store ball to placate a two year old's tantrum.

Amazingly, I did win Hallie a prize on my first shot a wack-a-mole.  This was not something that I could replicate so yes, of course, we ended up shelling out lots of money for another prize for Lea.

Suffice it to say that the kids had a great time (even with Lea's confinement to solid ground for much of the time) and we have just what we need out of the experience:  more balls and more stuffed creatures to which we must tend.

Anyway, here's a cute shot of all the kids on Alex's front porch: 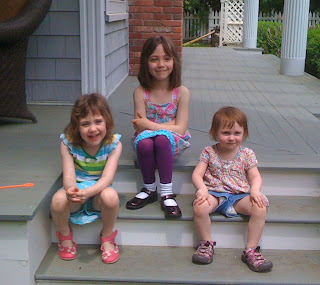 And here's one of Lea standing in the green grass.  Doesn't her hair look really red?  During the winter she seemed to be turning into a brunette, but now that she's out in the sun a lot, her red hair has returned. 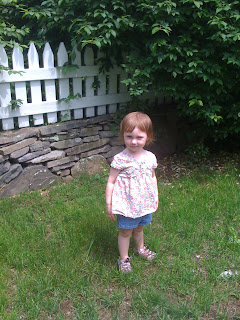 Anyway, the girls really love spending time with their friend Alex and hope to do it again very soon!
Posted by abby at 7:56 AM

Looks like great fun! We went to Victoria Gardens last weekend, the carnival they put up in Wollman Rink each summer. Eliza has a far better stomach than me since the hot air balloon almost did me in! :)