We Are Aware of Autism 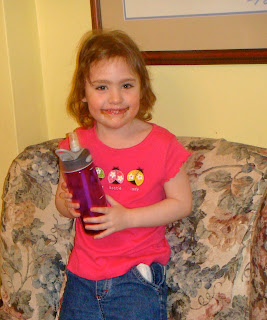 This probably wasn't always true, though. I think it's a pretty safe bet that, in one of my more ornery moods (which are too common, alas), I was intolerant as the 6 year old melting down in aisle 4 of the grocery store, and condemned his or her parents for not raising him properly/disciplining her effectively/raising him correctly. Back then, I would stare at the kid, glare at the parent, and feel all smug about things.

Those days are gone.

We are lucky insofar as Hallie is not--at least at this point--prone to tantrums (unless, of course, she is asked to eat/somehow takes into her mouth something that triggers some sort of sensory aversive reaction. Then all bets are off). But Hallie has her other behaviors that puts her on the spectrum: she checks out when she is overloaded, or stims (she spins or flaps--although she's learned to pretend to be a bird and says 'tweet tweet' most of the time when she's flapping now) or can't seem to settle herself down. And, even though she does a lot of talking and asking of questions (she is particularly fond right now of asking us "what is that?" where pretty much everything is concerned), her language is peculiar. She clearly has trouble with pragmatics and with following along with things that other people say. She takes much longer than her peers to answer questions or get a statement out. And she cannot filter out ambient noise or visual stimuli and is far more prone to distraction than most nearly four year olds.

We just had a follow up with Hallie's developmental pediatrician earlier this week. There's no question that the enormous effort that we're putting into helping Hallie is paying off: between the Floortime/DIR, hippotherapy, and the extra speech and OT that we're doing, the changes that Hallie has undergone over the past six months have been enormous. Her eye contact is far better than it has ever been, she is beginning to initiate interactions with adults and peers in much more meaningful ways, and she just seems so much more engaged with the rest of the world. We regularly play turn-taking games here at home (and I know that she's doing this at school with her peers, too). And Hallie is grooving on showing us stuff (of course, she'll often grab someone else's artwork and bring it over to me and say something like "Mama, look! Here's my pretty picture!").

But this progress in no way means that she is 'recovered.' I don't want to step into a minefield, but my sense is that those who are autistic can cope but not really 'recover'. Autism isn't a disease so much as it is indicative of a different kind of wiring. Even with neuroplasticity, it's not like her brain can just rewire itself along 'typical' lines; rather, we can help her form associations that allow her to develop mechanisms to cope with some of her sensory difficulties; help her developmentally even if she does it at a different pace and along a different pathway than her neurotypical peers; and even out some of the eccentric edges that she has.

The Developmental Ped that we see was thrilled at Hallie's progress and sees it as a testament of how well Early Intervention can work. And yet she was surer than ever of her diagnosis: Hallie is a high functioning autistic. She always will be. Yet she is capable of great things.

Speaking of great things, here's a picture of Hallie having a very nice lunch with me at the CHOP cafeteria in between her two appointments (pulmonology at 11 and developmental pediatrics at 3pm). Even if she only ate a quarter of a piece of pizza (at most) and took a few sips of her apple juice, she was extremely cooperative and enjoyed sitting at the table with me while I managed to eat about ten bites of my salad: 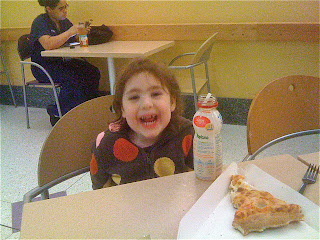 Insofar as raising Hallie has taught us to be more involved and engaged parents and better advocates for our kids and less likely to take things for granted than we would have otherwise been, we feel grateful for what we have. And yet it sucks. Between our anxiety about the future (will Hallie ever have a real friend? will other kids ever invite her to their parties? will she be able to negotiate elementary school/middle school/high school/college/the real world?), the gearing up for constant fights with insurance/the school district/providers/ourselves when things get hard to handle, and the sheer exhaustion of our daily routine, we're more than personally aware of autism. Add to that the toll that autism takes on us as a family (the things we cannot do or do not do because they are too stressful or we're too tired to contemplate doing them) and the friends we've lost (who were admittedly not worth being friends with in the first place, but still, it sucks when they pull away because your kid is not advanced enough/weird/quite possibly contagious), and you've got quite a bundle.

But the thing of it is this: we're aware of autism because we have to be. What we'd like more than anything else is for folks out there to be aware of autism regardless of whether they are personally touched by autism. So here's what I think: be kind to people. Don't just assume that the meltdowns that a kid is experiencing are a result of the kid being spoiled/badly raised/worth writing off. Rather than standing in judgment, try to put yourself in another parent's shoes and appreciate that something else might be going on there. And try to value people for who they are and not for what you think they should be. And if you do know someone with autism or whose family is touched by autism (or prematurity or some other special need), be nice to them. Offer to help: we don't have a lot of help and we're stressed out and could use some. Even if you don't feel comfortable taking care of the kid with autism, offer to provide the typically developing sibling(s) with a more typical experience than they usually have (remember, they are affected by autism, too, and probably could use a day out by themselves when they get to do typical things and don't always have to tailor their lives and their schedules around their autistic sibling who needs to go to therapy/can't handle the noise and crowds of parks/movies/etc). Or just be a good friend to the parents and listen when they need to rant. Just be aware that autism is part of many families' realities and that they are doing the best job that they can.

OK: I'll come down off my soapbox now. Even with the disruption of Hallie's preschool being closed for spring break and the disruption that this (and Sharon's need to work late several times this week) have posed for Hallie, we've had a great week. The weather today was particularly glorious and so I had the kids out in the park for a bunch of time this morning and they really enjoyed that. Hallie is beginning to get the hang of swinging herself (it's a bit of a work in progress but she's no longer melting down when I don't let her onto the baby swings and she's making some advances in the leg-pumping department). And she had a great time on the slides. Finally, she went up to a little boy named Max and asked to play baseball with him. Admittedly she was more interested in the t-ball setup than the little boy, but that's okay. In my book, just going up to a strange kid and engaging him, rather than grabbing his toy/waiting until he was no longer interested in it and approaching it, is great.
Posted by abby at 1:31 PM 5 comments: