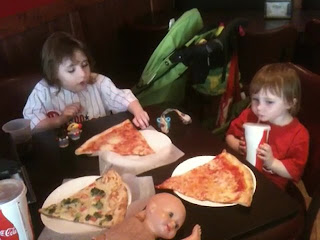 I am unabashedly plagiarizing this idea (and my comment) from one of my favorite autism bloggers, Lisa Quinones Fontanes over at AutismWonderland.  In a recent post, she relates a story about how she discovered the extent to which her son, Norrin, who is just a bit older than Hallie, is a literal thinker.  In short, this is a problem that many with autism (often of the higher functioning, Aspergerian nature) have with metaphor.

Anyway, I was contemplating posting this before Lisa beat me to the topic (hey, at least I can say that I am frantically working away these days on an article and can use this as an excuse for why I am not keeping up with blogging; once I meet my self-imposed August 1 deadline for submitting said article I shall start using my need to write a conference paper and/or prepare for the upcoming semester as an excuse!).  But Lisa is, as I have already noted, an inspiration to us slacker/bloggers.  And so I leave you with this story:


Our literal moment of the month: I had taken the kids out for pizza one day last week. We were seated at the table in the pizzeria and everybody was happily eating lunch. I turned to Hallie and said, "Isn't it great that we are eating out today, kiddo?" She flashed me a puzzled look and replied, "But we're NOT eating out. We're eating inside." She continued, pointing to the tables outside on the street, "THEY'RE eating out. We're eating IN."

I guess the kid has a point; we really weren't outside!   And I just love it that she stood her ground and explained her perspective to me.  Every day, she's getting better at this, at answering questions appropriately, and at asking questions of us.
Posted by abby at 11:50 PM 2 comments: 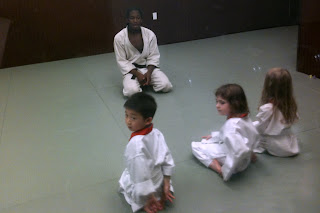 Last week, we decided to enroll Hallie in a martial arts class that meets a few blocks from where we live.  I had been passing by Zhang-sah, which is Korean for "brave scholar," for years.  Over the past year or so I had been thinking that it would be a very good thing for Hallie to enroll in a martial arts class; as one of her (many) school-based OTs pointed out to us about a year ago, one of the things that we might consider doing for Hallie as she gets older is cutting back (even if just a bit) on some of the formal therapies that she receives and replacing these with social activities that serve a similar purpose.  This would help us move from a medical- and intervention-based model to a community- based model, which is, down the road, one of our long-term goals.  While we clearly need to continue to do some medicalized/therapeutic intervention to help Hallie attain independence (things like learning how to fasten button and snaps, hold pencils with the correct tripod grasp, and write more fluidly come to mind immediately, but I suppose eating comfortably also falls into that category), we really have gotten to the stage (I think) where some of this is now possible and extremely desirable.

In no small part this is the case because Hallie really has developed a few wonderful friendships at preschool.  And, as it has turned out, her closest little girl friend, B.,  just happens to be taking a pre-martial arts class at the studio that is close to our house (and even closer to B's house).  Since B. has now graduated from the YCCA and is about to go on to kindergarten, I've been particularly concerned with trying to find ways for Hallie and B. to maintain their excellent little friendship.  Even if they don't see each other every day at school, attending a weekly martial arts class together seems like an excellent way of achieving this goal.  And, in the meantime, Hallie will hopefully work on developing her core strength, discipline and focus, coordination, self-esteem and assertiveness, and a bunch of other good things like that.

So, given all of this, last week I popped in to Zhang-sah to sign her up and schedule her "z-mat" test.  The sensei would assess her readiness for pre-martial arts and get to know her a bit and Hallie would get to familiarize herself with the dojo and the idea of doing martial arts.

Fortuitously, Hallie, Lea (who would love to take a martial arts class but needs to wait until she turns four...since they are not willing to accept her own self-designation of herself as a six year old) and I ran into B. and her mom on the street on the way to the z-mat.  B. decided to accompany Hallie to lend her support during the evaluation.

Not so fortuitously, as it turns out in retrospect, Hallie was getting awfully sick and was a bit miserable.  Her sensory issues were way out of whack and her neophobia was at an all time high.  So she did not take well to the idea of doing something new and being evaluated for it.  However, B.'s presence really helped her through the (perceived) ordeal.    I daresay she even managed to have fun.

That remained true, alas, until she needed to try on her gi (the martial arts uniform) to make sure that it was the correct size. At that point, Hallie once more reverted to shut down mode.  She literally curled up into a whimpering fetal ball and could not be coaxed into trying on the outfit  by anyone or anything.  I decided to take the extra small and run with it (even though she's at the 75th percentile in height, she is clearly thin enough to fit into an extra small, and even, as it turns out a 2T pair of shorts right now.  The particular illness which she has managed to contract has enabled her to shed two pounds in under a week.  The rest of us should only be so lucky!)

Sharon and I had no idea what to expect given Hallie's histrionics.  But we decided to plow forward and signed a (month-to-month, just in case things did not pan out terribly well) contract with the martial arts studio.  We were impressed by how much the instructor could tell about Hallie from a fifteen minute evaluation.  We had divulged nothing on the paperwork other than the fact that she sometimes needs an inhaler before physical activities (this was most certainly the case this past week or so).  But he had picked up pretty much everything:  the low tone in her trunk and extremities; her right-side weakness (due to her left side grade I intraventricular hemorrhage), her tight heel cords (which are consistent with her undiagnosed but likely case of mild cerebral palsy (probably ataxic)  and the like.  But, even though she had trouble balancing on one leg and coordinating her movements, she did pass her z-mat.  I told her the instructor about her issues (the extreme prematurity, the brain bleed, the low tone, the problems with auditory processing etc) ex post facto, and he seemed cool with it.  My feeling is this:  she may not be the most proficient martial artist out there, and that's fine.  As long as this is good for her self-esteem, assertiveness, physical capacity, and social well-being, that's okay.  Not everything is, or should be, a competition.

Yet, that said, we wanted to make sure that Hallie had fun doing this.  And our first experience was none too auspicious.  We weren't sure whether it was that Hallie was coming off of a recent bad experience with swimming lessons (long story short:  the platform that turned a 6 foot pool into a 3 foot one came loose and Hallie went under and was terrified, and remains so to this day) or the illness, or just the sensory stuff that seems to accompany being on the spectrum but we were terrified that Hallie would be miserable when we returned to the dojo to take an actual class.

As it turns out, we should have been considerably less concerned.  Hallie had a marvelous time.  Maybe it was the series of lengthy conversations about this that Sharon had with Hallie.  Or perhaps Hallie was feeling better.  Or maybe it was the fact that everyone was wearing a gi.  Whatever it was, we are grateful and quite impressed by Hallie's willingness to try new things and do so gracefully. 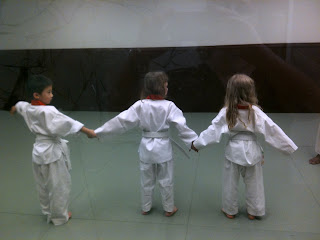 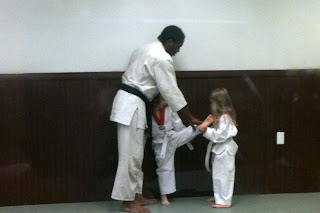 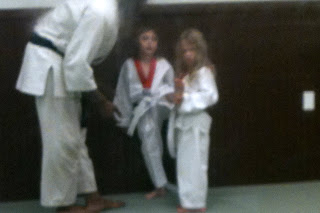 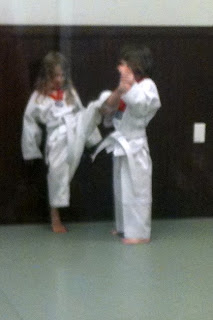 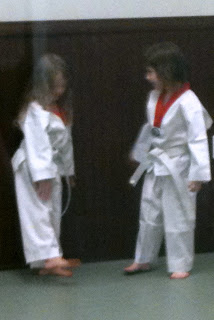 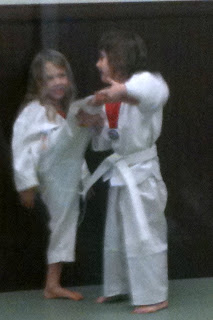 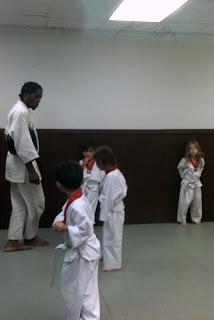 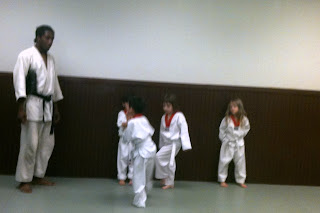