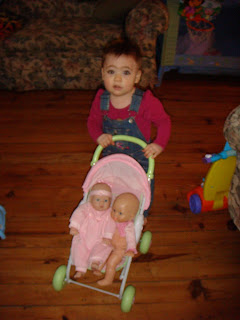 Hallie had her much delayed Early Childhood Intervention assessment yesterday. I was struck by several things involving this process: 1. how bureaucratic it is and how much paperwork is involved. I felt like I was signing mortgage papers all over again. 2. how artificial the categories seem. For example, there's nowhere on the DAY-C assessment sheets for scoring fine motor skills in any real way. Does she stack? No. Does she do puzzles accurately? No. Does she put things in things deliberately? Yes. So she passes. The three skills don't seem precisely analogous to me. 3. The answers depend very much on what you want them to be. So the Special Instructor, who has been a no-show more frequently than a show for the past six months (she was slated to come twice a month since June and has been here maybe four or five times since then) wanted Hallie to age out of Special Instruction, so she did. This is fine with us.

That said, Hallie placed pretty well in most categories: she is at 15-18 months for Social and Cognitive and Physical skills (the latter collapses fine motor and gross motor skills into one category; Hallie excels at the latter but not at the former). She is 27% delayed for Speech and Communication and places at the 11 month old level for that. Three weeks ago her delay would have been closer to 50% and she would have placed, at best, at 8 or 9 months. She has three to seven words that she uses in an emergent way and three signs that she uses consistently (more, book, and all done) and shakes her head 'no' but not 'yes' and, while it's clear that she knows what 'no' means when told it, she does not always use 'no' the head-shake to signify that. This delay is a good thing in some respects, because Jenny, Hallie's wonderful speech therapist, wants to keep working with her. So we'll now have speech twice a week (which is what it's been since August or so) and OT once a week. And we'll also start working on eating with Jenny, too (nowhere does this show up in the DAY-C assessment at all---she'd have placed at the 6 month to 8 month level had feeding constituted a category, I think).

Given the artificiality of it all, I am not sure how to assess the assessment tools' validity (SIDE RANT: This is, after all, the larger problem of all outcomes-based assessments, which is very much in vogue at all educational levels these days. How you phrase the question matters and often how you phrase the questions is predicated on what you want to see). But I am relieved that Hallie, right now, seems to be doing quite well, and even where she is lagging behind a bit, she is making progress.

Feeding is another issue altogether, and we are beginning to lose patience a bit. She is drinking out of her straw cup (a real one) nicely, and she's pretty good with Stage 2s and pureed fruit, but the attempts we've made at Stage 3s and crunchy meltables all pretty much end the same way. It ain't pretty. We'll be taking her to the ENT for a follow up on the question of how much structural stuff might be at the root of Hallie's dysphagia (vocal cord paralysis, laryngomalacia, and possibly tonsils that impede her swallow). And we'll be consulting with Hershey Medical Center (largely because they MIGHT take our insurance---who knows really? millions of phone calls need to be made on this) about feeding therapy. At the very least it'll give us another opinion.

Yesterday we did have the first vomit-free day of the year. The total for the second half of 2007 (mid May to end of December) was 16 vomit free days. We are hoping to break that goal this year, but suffice it to say that we tried a Stage 3 today, so today does nothing to advance this long-term objective. However, and this is important, the flax seed oil or the prune/peach/miralax cocktail does seem to be helping in the pooping department. As you can imagine, we need to febreze our entire living room/dining room area pronto!
Posted by abby at 6:06 PM

I say...screw the stage 3's! Who decided that it would be a good idea to mix chunks of food into smooth baby food in the first place? Amelia just swallows the smooth food when I feed her. I think that the chunks of food really confuses them, and it just isn't what they're expecting.

I like your analogy of the annual EI eval to a mortgage signing. And I can't figure out why some skills are critical and others are not when they each seem equally irrelevant.

What I am impressed with is that you obviously were able to assembly the Fisher Price Little Mommy stroller! Took me longer to put that thing together than it did to assmble the Bugaboo.

On the stroller: that was all Sharon's doing, not mine (I have even managed to screw the arms onto an adirondack chair backwards). And even she cannot take full credit---Sharon honed her Fisher Price Little Mommy Stroller construction skills only by watching Aunt Laura having difficulty constructing the same stroller for her daughter (something that ultimately resulted in one mangled stroller into which the slightly-larger-than-newborn American Girl Bitty Baby did not fit; it was a bust all around).

I should have realized in the dark of night at Toys R Us that there was a reason all of the pre-assembled umbrella strollers were already taken and this poor substitute was left. Maybe Hallie and Eliza can donate theirs to the Island of Misfit Toys.

Congrats on the vomit free day! Those are amazing when they happen. And hubs and I used to kind of look at each other knowingly near the end, both unwilling to speak the words lest Aidan decide that it shouldn't be a vomit free day! ;-)

As for the skills thing....it bugs me. I bet if you sat almost ANY kid down they would score all over the place on these seemingly random skills. Some kids simply don't LIKE doing things. Can Aidan stack blocks? Definitely. Does he particularly like blocks...no, not really. He'd rather play with his Mr. Potato head, color, etc. You get the idea. His fine motor skills are just fine...but he may not like doing what is being tested.

aren't those evals fun?
we have a scheduled one coming up with an agency that for the life of me i can't see what they do for him...i mean they are never around except to annually assess him and then pronounce that he qualifies for their services. i try to focus on who is helping him and the fact that he is making linear progress. on his own timeline, still it is progress.
good luck with the hershey center evals. for us removing daniel's tonsils and adenoids helped swallowing immensely. they were massive.
i thoroughly enjoyed her year-long timeline in the previous post. she has made so much progress. what an amazing girl she is!

I'm not going to get started on my assessment rant because then i'd have nothing to complain about when we have our assessment next week. As for the stage 3s, skip 'em! Try adding a little bit of bread crumbs or cookie crumbs to the stage 2s and slowly increasing the amount as she tolerates. That'll get her used to the texture without freaking her out with big lumps.
I just have to say that I'm totally jealous of the 16 vomit free days in 1/2 a year. We've had 4 total since Noah graduated to full feeds in the NICU. That they've all been in the last 6 months is encouraging to me, but I'm not holding my breath.