This'll be fast because I'm supposed to be sleeping (yes, you guys hear that a lot). (EDIT: Blogger has been a nightmare with pictures, so this is anything but fast...indeed it took twelve hours to post this...I did sleep part of the time, though!)

So, after provoking huge amounts of anxiety in me about the 'no talking' thing, Hallie decided tonight to mix things up a bit. Again.

Tonight, she started practicing her 'b's again and repeatedly said "buh-buh" every time I pointed at Big Bird. She also said something that sounds a lot like "whassthat?" nearly all evening. And she tried to say "chair" (going over to her high chair). It came out like "chuh" but we'll take it. "It's Telly" (again, to Telly, on the television, naturally) came out very clear.

Is this proto-talking a phase? The not-talking a phase? Is she just not interested in telling us stuff one day, and interested the next? Much as we used to want to get into our wonderful old dog, Bailey's, head and find out what she was thinking about (we used to say to one another: 'boy I wish she could just talk to us for one day; I have so many questions to ask her'), we now feel the same way about Hallie (though want to communicate with her even more).

So, who knows? Like everything else, she seems to be doing things her way. Do they conform to typical development? Deviate from it? Who can say. All I know is that she'd be giving me a bunch of gray hairs if I didn't already have them!

And, because I've been a neglectful photo poster, I'm adding in the pics from this past weekend's concert.

This one is of a very cute Hannah and Adam. 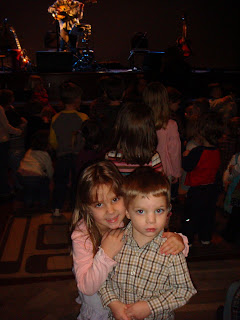 In this one, Hallie is making her french-fry eating debut. Doesn't this look a lot like a normal lunch? We're not quite there yet, but we'll make it (although we did have a bit setback today when it was accidentally confirmed to us that Hallie is indeed cow-dairy intolerant. That seems to be at the root of a lot of upchucks in our past). 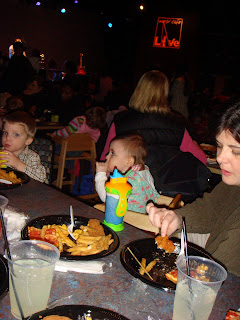 And in these two, Hallie is engaged in a very engrossing game of 'oh-no-peek-a-boo' with Adam and Hannah. She doesn't quite get that you cover your eyes in peek-a-boo (though she does use things like blankets to cover her head). Instead, she clasps her cheeks. Anyway, she thought this was hilarious and cracked up the entire time. 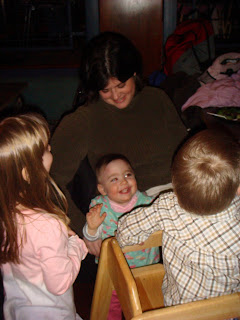 LATER: Since Blogger is being annoying, I guess I'll write more while I wait for the pics to finally post.

Anyway, Hallie had a super time at the concert and we were thrilled about the fries. And the mamas had a pretty great weekend, all totaled. Friday night's birthday dinner was FABULOUS (it was at a great new-ish restaurant called James that we'd been meaning to try but haven't had the opportunity to since we rarely go out anymore. The best part is that James, along with numerous other fine dining establishments, is located three blocks from our house. So, even though it was frigid out, we were able to walk. I love living in Philly for that reason.

Saturday's concert obviously rocked, and we got to spend time with our niece Megan who is getting help from Sharon on a school project.

And on Monday, Ellen (Hallie's first friend and nurse from the ICN) came over to babysit/spend time with Hal while we went out for Restaurant Week (to a very excellent place we'd been before, called Meritage. They have a great wine list, though we obviously did not choose from its very choicest offerings).
Posted by abby at 12:16 AM

I burst out laughing at this post because I'm wondering if this is just our preemies' way of keeping us on edge? We were stressing Bennett's language, he had his assessment with the school therapy team (like 7 of them!) two months ago and they told us how delayed he was, he qualifies for all this, blah, blah. They wrote up goals for him like "Use two word phrase" and "Names objects if pointed to." At 3 he's using five word sentences like "Read me this book, Mommy!"

We've found with our oldest three that as soon as a therapist writes down a goal or concern, the child will meet that milestone within two weeks. They were joking about it at the ARD meeting, how Bennett's just trying to give them more paperwork by forcing them to rewrite all the goals. Maybe Little Miss Hallie is in on that trick, too? :)

I'm no expert but I think Hallie is VERY smart and vocal. I will be amazed if Serena is talking like that in four months...she "talks" a lot but doesn't associate meaning like Hallie does yet...except for "ma ma" and she knows the word "no" but doesn't say it. Edwin I think will take a little more time as he is a few months behind his sis. I think there is a fine balance between being thankful they are doing better than anyone ever expected, and making sure as parents we are utilizing resources to enable them to reach their potential. Hey, we don't have it easy!
I think Hallie will definitely do things on her time, and in the meantime I think she is doing amazing!

It's funny, we go to world cafe live and heard of James...we also are going to try it!
We should def have playdate this summer!!!!

Besides Kinnick and Carver, we have 5 other children. All 5 other children were full term healthy children. My 2 year old just started talking better. In fact, I still can't understand 1/2 of what he says. I can tell him how to say something and then ask him to repeat it 5 minutes later and he won't be able to repeat it. Then out of the blue - 3 days later he'll say it correctly.

I think Hallie is doing fabulous. In fact, I think she is ahead of a lot of full term babies.