Hallie had a very nice Hallowe'en this year and did her first real trick-or-treating.

Hallowe'en got started with Hallie in full Phillies regalia but, after hearing about how fans were already lining up along Broad Street in throngs at 7 am for the World Series parade that was only going to get underway at noon, I decided that we'd skip this bit of our day. Hallie has no real knowledge yet of baseball (sigh) and is not one to do super well in crowds (she gets sensory overload from them, as do I). So we headed to the playground for a super long, super fun session. For the first time ever, I managed to avert a meltdown on Hallie's part when both of the toddler swings were taken. I'm not sure how I convinced her it was okay to slide first, but she went along with my plan and did some sliding until a swing was free. She then swung, played ball, drew all over the place with sidewalk chalk, picked a couple of flowers (one of Hallie's current obsessions), ran back and forth across the bridge, played a bit with Sophia (our neighbor) and a bit more with Sophia's mom, managed not to melt down again when she had to give back Sophia's Elmo, and stomped through the leaf pile.

All of this proved exhausting, so after a quick bite of lunch that followed her OT session, Hallie went down for a two and a half hour nap and woke up just in time to get dressed in her butterfly costume and head out to a different park to meet up with Taylor and her moms, Renee and Kim. 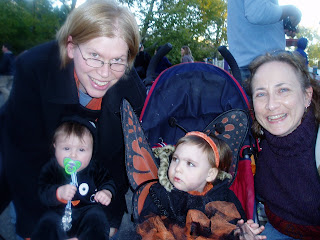 We caught the tail end of the doggie costume parade and Hallie played hard among the huge crowd of costumed kids in the playground. Again we skirted a couple of meltdowns which almost happened when swings were taken, when Hallie had to wait for other kids to finish their sliding so that she could slide down, and when I narrowly missed hitting a little puppy (boy) with Hallie's swing after said puppy-boy darted in our path out of nowhere.

Sharon met up with us at the park and the three of us headed home so that trick-or-treating could begin in earnest. We tried taking a few photos of our flitty little butterfly but none of them were great. These are the best of the bunch: 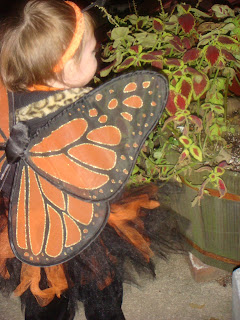 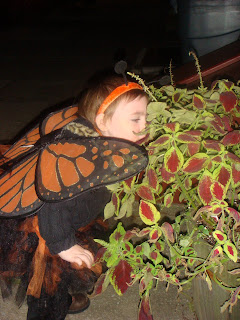 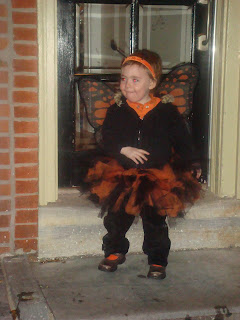 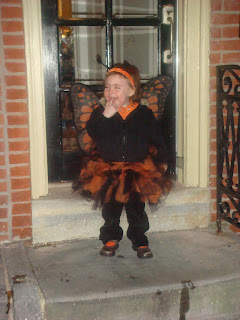 Then it was off to collect some candy. This is a bit bittersweet, since, of course, given Hallie's allergy and eating issues, we have yet to find a candy that is safe for her (she tried, and like the taste at first, of hershey bars last year, but after nibbling a bit on one, she began to vomit profusely. The only other kind of candy she has eaten is cotton candy and this may end up being an option for her down the road). We'll be eating her stash, unfortunately (though I suspect we'll have a bit of help from Ami). Anyway, Hallie really enjoyed grabbing candies and saying "thank you" (she can't quite get trick-or-treat out yet). And she got into the spirit of the holiday by doing a few crafts on this really great block nearby where everyone hangs out together (most of the adults are in costume, too) and many of the families have set up tables for the kids to make decorations of various sorts. The highlight of the evening for Hallie was dunking her arms, and at one point nearly her entire torso, into one of those water play tables that had been set up earlier for a game of bobbing for apples.

We left shortly thereafter because, though it was warm out, our kiddo was soaked through both of her sweaters and her two shirts and there was still a bit of a chill in the air. We got her changed, went over to Mark and Vanessa's for pizza, and Hallie had yet more fun playing with Karina.

It's no wonder, with all of that activity, that she collapsed at around 10:00pm and stayed asleep until 11:00am on Saturday. We took it easy this weekend (which also allowed me to continue working on my conference paper, which is about 75% done now) and spent today adjusting to Daylight Savings Time.

Which reminds me that I need to get to sleep pronto since Hallie's likely to wake up a lot earlier than I'd like to!

But just an update on the vomiting: we're now at 144 days of vomit free existence (today isn't one of them since a super tired Hallie accidentally banged her head on the wall after her bath during her nightly ritual of trying to avoid diapering and getting into her jammies). And Sharon is now at 26 weeks 2 days and going strong. Tomorrow she gets to experience the joys of a gestational diabetes test for the first time. I am sure she can't wait (it would be better if they'd let you eat a lot of that leftover hallowe'en candy rather than drink that yucky glucose drink, but I don't suppose they'll go along with this shift in protocol).
Posted by abby at 1:45 AM

What a pretty butterfly!

Wow-- the diabetes cocktail: a milestone I missed, too. Congratulations!

it depends on how receptive they are. when pg with my #4 i was allowed to consume 9 jelly beans which the sweet success team figured out to have the equivalent of that lovely, yummy glucola. it was the only way i could get through the test without hurling as i had hyperemesis throughout that pregnancy.
good luck and hugs to the most beautiful butterfly i have seen this year.

She looks so cute in her costume. Isn't it fun to see them so excited? Almost 27 weeks...keep up the great baby growing!!