Sarah,Sydney and Levi's mom tagged me a couple of days ago, and slacker/overworked and undeslept person that I am right now, I haven't managed to get around to doing anything about it (or posting anything else, for that matter!)

Here's the parameters, which are really quite simple (unless you've recently had to rebuild your desktop, but even so, it's not too bad): You go to your picture folder on your hard drive, open the sixth folder on there and then upload the 6th picture in that folder. Here's mine! 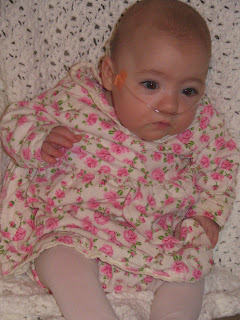 Amazing how little Hallie was back then. This photo was taken when she was about 7.5 months old/3.5 months corrected, in January of 2007. We thought she was huge, but indeed, as it turns out, hitting 10 lbs is something that full-termers do at 4 or 5 weeks of age, not at close to 4 months (who knew they could get so big so quickly?).

Other news: Beef ended up being a fail. By Saturday the gagging and vomiting once more became a daily event, and Hallie had three pretty bad days in a row where her tummy hurt, she was gassy, and her sleeping was way off. Things got a bit better on Tuesday, but she is still refluxing like crazy and she remains "off" in terms of her mood and her sleep. I have emails out to GI and am trying to pick someone's brain about whether it might not be worth trying her on digestive enzymes (if anyone knows anything, please let me know!). Meanwhile, we feel pretty dejected and almost resigned to keeping her diet restricted to the five foods she can eat safely and never try anything new again. At least we finally did make it to, and then exceed 150 vomit free days this year. Total tally so far is 151, but let's just say that yesterday and the day before that's success could have just as easily been failures since Hallie was clearly in abdominal pain and was trying to make herself vomit to get some relief. It's just that Sharon and I are hawks and caught her in time.

Otherwise: baby-to-be is still doing great. Sharon is at 27 weeks 5 days and going strong. We're still not any closer to finding a name though. I suspect we'll be spending the first three or four days after this one's arrival working things out. We've heard some lovely ones, though, so keep them coming!

Anyway, I'm tagging Sarah,Shoshanna's mom and Laura, Daniel (and the rest of the Big Top's mom and lovely Hazel's
grandmom...
Posted by abby at 1:21 PM

I love that picture!!!

it seems so unbelievable that she was that small...or even smaller. but she was. i always think that when i look at pics of daniel when he was a baby.
so i played along and surprise! i found a baby picture!
http://adventuresinjuggling.wordpress.com/2008/11/13/picture-tag/
i still think that "Laura" would be the perfect name for 3rd trimester girl.
thanks for inviting me to play along.

HAve they ever thought about probiotics with her? You will have to do some research as to what one would work, but when Sam was having constant excrutiating belly pain, they started him on two of them (culterelle and florastor: both are milk based though) and it made a significant improvement, it also decreased the diarrhea. I know of one that is dairy free it is called BioBeads, but I believe it is a pill. The probiotics might be worth looking into. Congrats on 27wks, we are rooting for 38 and change:-)
How about Audrey Grace, Audrey Jean, Sadie