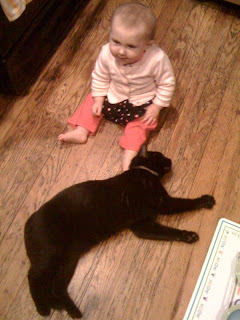 This past weekend, we decided that it was time to add to our family. Sharon and I had been eager to get the girls a cat for some time now and the virtues of this decision were underscored by the absolutely fabulous time that they--and epecially Lea--had when chasing around Aunt Laura and Uncle Bryan's cat, Rocky.
Anyway, two weekends ago Sharon and the girls visited a shelter to see a couple of cats and none of them were terribly impressed. This probably wasn't the cats' fault; it's hard to tell what a cat's personality might be like when it's cooped up in a cage all of the time.
After that unfruitful effort, we decided to try to find a kitty that had been foster-cared. This was pretty easy to do. So, Saturday night, after it was clear that Hallie was on the mend (she had fallen ill with the laryngitis/fever virus that had struck me earlier in the week), we took a drive over to the Art Museum area to visit a woman who fosters quite a few cats (she is living with 15 right now, and three of them are hers). All of the cats scattered except for one: a pretty black boy cat who is about a year old. He followed us from room to room and seemed quite happy with us, despite Lea's over-eager overtures. The other cats were quite lovely, but this little black one was special. He had chosen us.
So, not an hour later, we ended up taking him home. The name he had in foster care was Nelson, but his new name, Zen, fits him so much better. He's been living with us for the better part of a week now and seems quite content here. He is the gentlest, most easy going cat you can imagine. And this is a good thing because Lea is neither of those things. She can't get enough of Zen and relentlessly follows him from space to space, intoning "Kitty!" the entire time. She loves to smooch with him, lay her head down on his tummy, and cuddle up with him. He basically tolerates all of this (and when he's had enough, he lets Lea know with a playful swat that has yet to lead her to incur substantial damage). Lea also loves his food and water bowls and is hearing a lot of stern "No, Lea, NOs" these days. 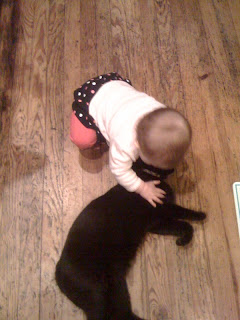 Hallie loves the idea of Zen but is much more cautious around him than her younger sister is. Zen likes to come up to Hallie and rub against her leg. When he does this, Hallie says "I sorry, Zen! Excuse me!" This is totally cute. But Hallie is warming up to him and trying to pet him (gingerly). And she was completely thrilled to give him catnip this morning and watch him go completely crazy for it.
Anyway, Zen is part of our family now and we love having him here. Welcome to our nutty world, Zenny!
Posted by abby at 2:23 AM

Zen is just a lovely looking cat! I reserve the right to call him Kitty.

That is so cute that Zen is that patient with Lea. ELizabeth wants a cat desparately but me I have horrid childhood memories of cats. I love how Hallie apologizes to the cat.