Hallie hit a major milestone today:  for the first time ever, she expressed an interest in baking with me.

Cooking is something I have long look forward to doing with the girls.  Way back when Sharon was pregnant with the twins, I used to walk around talking about how we'd hold 'clinics' in our kitchen where I'd teach them all about spices and how to make flavors 'marry'.  We could have 'spice of the week' weeks and 'guess the ingredient' games and do other fun stuff like that.  And this, of course, would be part of my special time with the kids since I love to cook and Sharon, to put it mildly, does not.  Well, actually, that's not necessarily the case:  she has no idea whether she likes to cook because she doesn't cook at all.  When I first met her she literally had the following in her fridge and cupboard:  salt (which she enjoys more than your average individual does); sugar (purchased for her by someone who wanted to add some to a cup of tea or coffee); Lays potato chips and cheddar cheese (eaten together as a dietary staple); and a stick of butter.  So living with me has been both incredibly frustrating (we have a million things in our fridge and tiny kitchen cabinets and this array is ever expanding) and yet delicious (I hope) since I can whip up a fairly decent gourmet meal at a moment's notice.  Should all the stores in Philly close down for whatever reason, you probably want to head here since I am fairly certain we'll be able to hold out for a few weeks or months with what we have in house.

So, given how much I love cooking (and shopping for cool ingredients), it's been doubly sad that Hallie has such a fraught and negative relationship to food.  It meant that we could not share something that I really longed to share with her.  Lea seems to be heading in the exact opposite direction (she loves to eat, but is especially fond of fruits and veggies and will try almost anything, even foods that are a bit adventurous for a 2 year old like pad thai and curries).

Anyway, I am sort of digressing.  To return to the subject:  on New Year's Day, Hallie requested chocolate chip cookies.  We didn't have any pre-made ones in the house (I tend not to buy store bought cookies, with the exception of graham crackers and Oreos since she'll eat those).  So, being the mom that I am, I offered to whip up a batch of chocolate chocolate chip cookies for her.  Half an hour later they were ready and, wouldn't you know it, she ate a few.  She proceeded to eat a couple more per day, every day.  She would often just eat part of a cookie and then move on to another one (who knows why Hallie does this, but this is a pattern even when there is no discernible change in taste from one portion of the item to the next.  For example, she'll nibble all around the edges of a Ritz cracker and reject the middle).  No matter about the discarded half-cookies; I considered it a major victory that she was willing to eat something that I actually made from scratch.  (FYI:  I do not consider toasting wheat bread and smearing it with butter to be real cooking).

The kids finished up the last of the cookies this morning and I offered to make some more.  I took the butter out of the fridge to bring it to room temperature and set up the Kitchen Aid Stand mixer on the counter (some day I would enjoy having a kitchen big enough to allow me to leave it out all of the time).  I was taken aback, in a very nice way, when Hallie asked me if she could help.  We read through the ingredient list together and she helped me measure out the white and brown sugars and the flour and cocoa.  She was excited about cracking the eggs (which she did very carefully with my assistance) and eagerly smelled the vanilla.  Dumping the ingredients into the mixer was a hugely fun endeavor but each time I got ready to turn it on, Hallie announced that she needed to go into the living room to hide since the mixer was too loud.  I tried to keep the loudness to a minimum (I only really needed to turn the mixer on high to cream the butter and sugar; the rest could be done at a slower and quiet speed).  And by the end, when I was mixing in the flour, I was doing it at a very low speed to avoid blanketing myself and the kitchen in flour (I hate when it poofs up and coats everything because I forget to take this precaution).

I was in the midst of doing this when Hallie ventured into the kitchen and asked if she could help.  Apparently she was no longer afraid of the mixer.  So she climbed up on the step stool and watched as the flour went in and then dumped the last couple of quarter-cups in as the mixer did its stuff.

The batter was basically mixed and I turned off the Kitchen Aid and lifted up the arm.  Hallie looked at the batter and said, "That looks yummy; can I taste it?"

I have never heard a more wonderful question in my life.  I responded, "Of course!  You can even lick the bowl!"  So I knocked most of the batter off of the spatula and beater and gave them to Hallie.  She ran to the living room and went to town: 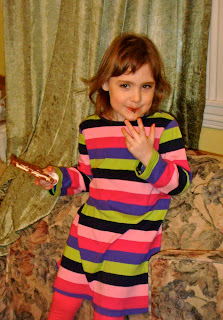 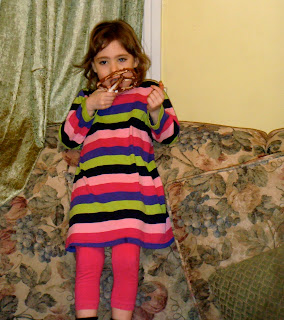 She came back to help me mix in the chocolate chips (which she sampled first; she loves chocolate chips) and helped me form the cookies.  She was eager to make sure that they turned out right and so she asked for (and received) a flashlight that would allow her to examine their progress through the oven window.

I am happy to report that they turned out fine. 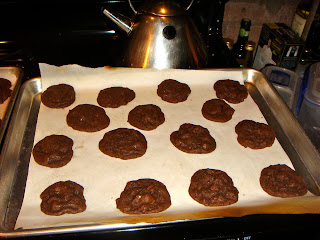 What a lovely way to spend part of the afternoon!  I couldn't have asked for anything nicer.
Posted by abby at 5:59 PM

And after reading the list of Sharon's kitchen "must haves" I appreciate your grilled steaks and sides more than ever :)

Go Hallie! What a great day for you both.

What a nice experience. I think baking is such a great activity for so many reasons (sensory, eating, waiting for turn, learning math). We bake a lot of things here and I really think it helped with getting Elizabeth out of her serious oral aversions. When we first started baking she would gag and retch when things were mushy, now she wants to taste everything we add and she loves getting her hands messy. Elizabeth ran when I put the mixer on too, once I let her be the one to turn it on she settled down.
What a huge milestone for Hallie.

Priceless! What an amazing moment for both of you. I hope Hallie continues to branch out with little tastes, nibbles, and adventures in cooking.