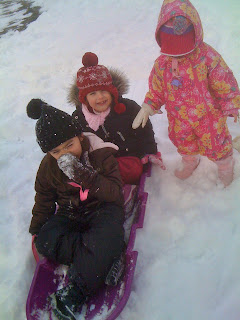 Philadelphia got about six inches of snow last night into today and, after our experience last winter (which featured snow totals in excess of 60 inches), everyone in the city overreacts to the mere mention of the word 'snow.'  The stores were picked clean (and crazy); residents (including myself) were gearing up for snow by mid-morning on Tuesday (and were disappointed by the fact that no snow had fallen by 6:00pm); the city declared a state of emergency (which was excessive) and had sent out fleets of trucks outfitted with plows and salting supplies to pre-treat the roads and prepare for the storm (which is a good thing); and numerous schools decided to close preemptively.  By morning there was snow on the ground and the Philadelphia School District shut down for the day (but Hallie's school was open; sadly, since she doesn't go in until the afternoon on Wednesday, she did not get to play in the yard with all of her friends who enjoyed the soft powder).

But never mind that; we made our own fun.  Around about 11:00am, I got the kids bundled into their snow suits and grabbed the plastic sled we purchased last winter and we headed out into the elements.  We ran into our next door neighbor's girls who were hanging out shoveling the last bits of snow from the walk in front of their house and they and their nanny and their nanny's boyfriend (who graciously pulled the sled for them) traipsed down the block to the playground.

Amazingly, no one else was playing there so our girls had it all to themselves.  They made good use of it, too.

Hallie and Karina had a blast being pulled through the snow: 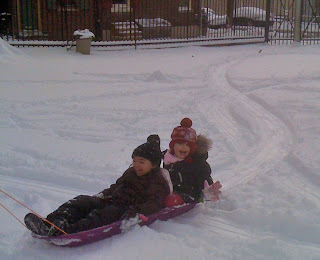 Ariana loved it too, but Lea was less convinced of the charms of being out in the snow.  She wiped out on the sled once (which no doubt brought back memories of eating snow when she was on the sled last winter) and didn't really relish getting the stuff on herself.  (This is also how she feels about sand, which is not terribly surprising).  But she had a few good (fairly slow) pulls through the playground in spite of this.

Hallie and Karina soon discovered the charm of snow sliding.  It was a lot of fun to race down the slide and land in a big fluffy pile of snow at the bottom: 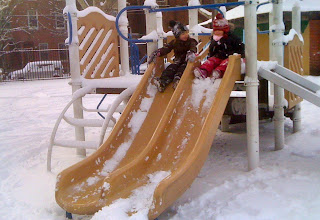 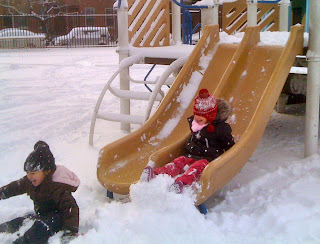 Lea was not so sure that this was quite as much fun as her sister suggested it would be: 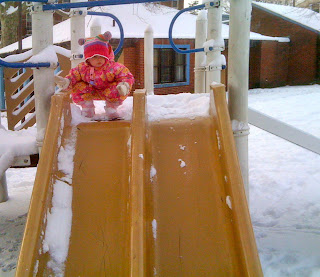 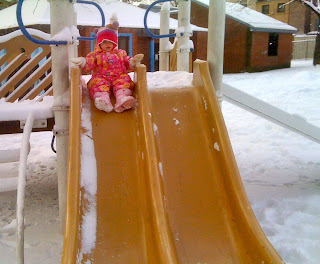 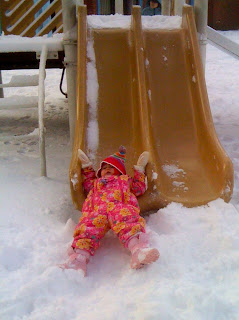 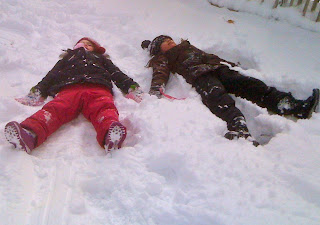 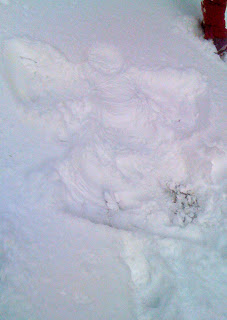 And speaking of perfect, Hallie's vocal cord surgery went swimmingly well on Monday.  She is working on yet another cold (which she did not pick up at CHOP; its origins are probably to be found in the epidemiological swampland of her preschool) so it's hard to tell if she has her full voice right now, but it's definitely easier to hear her.  And interestingly enough, she seems much more interested in speaking, and speaking in longer and more complicated and assertive phrases, than she was before the surgery.  We're not sure if she finds it more comfortable to speak (since she needs to strain less to be heard), or is aware that people can hear her better, or is just more confident, but our nanny and Hallie's teachers both mentioned this to us.  And we can definitely hear her better and don't have to walk up to her and ask her to repeat what she's saying a million times over.  She still does not have a full voice, and there's still a hoarse quality to it, but we are very happy that we did this surgery and, all things being equal, we will likely do a more permanent version of this some time this spring (the bulking should last between a year and two years before the medium gets reabsorbed, in contrast to the 3 months or so that this injection will buy us).  Anyway, I will try to capture Hallie's 'new' voice on tape and upload it at some point when she is over this cold.
Posted by abby at 1:45 AM

Looks like a ton of fun! I'm glad Hallie is doing well from the surgery!

And such a cute snowsuit Lea is wearing!

YAY to Hallie! So glad to hear that! And clearly, you kids are more experienced snowbunnies than mine is. He can't stand it.

Yay for the great results from the surgery. SO happy for you guys!