Storm of the Week Club

Note to Mother Nature:  I did not sign up as a member of this club and I am demanding a refund of my dues and a rapid transition to 50º and sunny outside weather!

Here in the North East, we seem to be stuck in a weather pattern that is bringing us some variation of snow, sleet, ice, or freezing rain at least once a week and usually on a Tuesday or Thursday.  Since I teach on Tuesdays and Thursdays, this is mucking up my syllabus (I haven't even gotten to know the names of my students yet!) and making me extremely cranky.  Gone are the days when I used to sit by the window wishing and hoping for a nice snow storm that would get my out of a test I had to take (I'd engage in prayer and bargaining with Mother Nature until about 9:00pm every potentially stormy winter night and then buckle down and study for 2 hours when my prayers did not work).

Instead, I read the scary accuweather blogs and forums obsessively, hoping that they are the bearers of happy tidings that a snow event will narrowly miss the corridor between Philly and Lancaster that is the site of my commute and life.

Alas, they never do, do they?

Last week's storm brought us this: 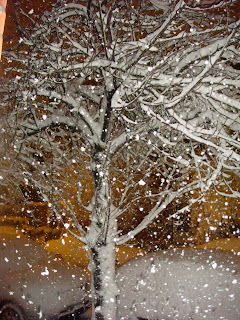 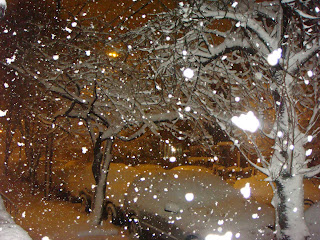 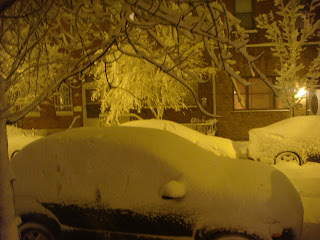 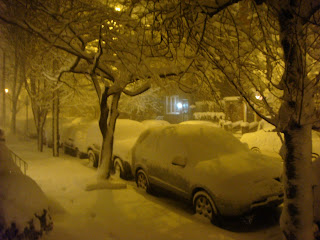 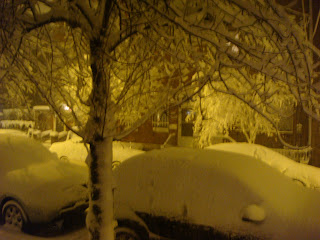 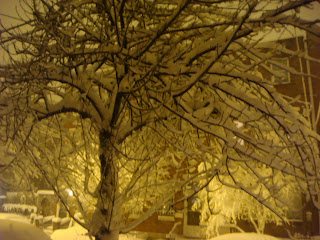 Oddly enough, we were not the only ones taking pictures at night from our front door.  Our neighbor across the street was doing the same thing.

That was the amount of snow that we had by about midnight on Wednesday into Thursday.  We got about 2 to 3 inches an hour that evening, so by the morning we had an impressive 15+ inches of snow on the ground (from just this one storm).

This is what Philly's Washington Square looked like on Thursday: 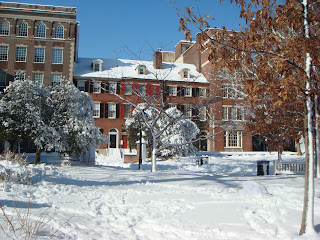 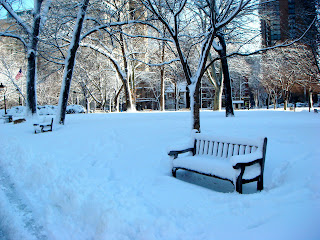 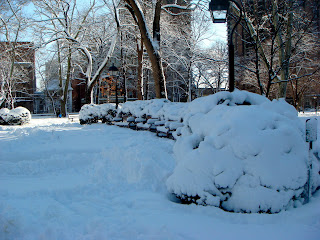 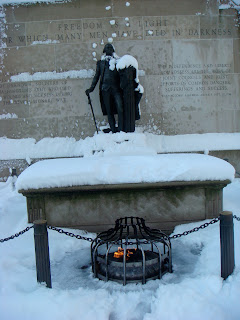 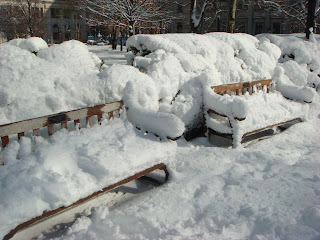 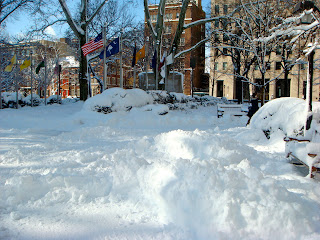 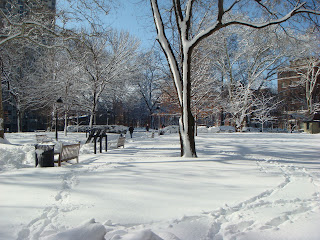 What's not easy to tell from these photos is that we also had a pretty impressive coating of ice underneath all of that snow.  We had gotten a few inches (perhaps 3, total) of snow on Wednesday morning.  This was then followed up with some heavy sleet and freezing rain.  All of that froze and turned into a sheet of ice that was extremely difficult to remove even when one tried hard to do so.  Not that everyone did, of course.  I wonder what kind of revenue stream the city of Philadelphia would have were the cops to actually issue those $50 tickets they threaten to give out to anyone who fails to clear a 3-foot-wide path in front of their property.    It's also amazing to me how bad the side streets are in our neighborhood (which is just south of the busy Center City district).  Even streets that typically are very heavily trafficked are icy, tire-rutted messes.  Lancaster (which appears to have been spared the freezing rain of last week's storm) is in much better shape than Philly.

Hallie was extremely perturbed by the sound of the ice pellets dinging on the house.  She couldn't make sense of the noise.  It seemed to her that snow was falling from the sky but it sounded nothing like snow at all. I finally convinced her that these were tiny little ice cubes bouncing off of our house.  At bedtime on Wednesday she asked Sharon if she could look out the window one last time to see the ice.  I think she was mightily confused when Sharon told her that it was snowing again, not icing.

While no big fan of the winter weather, Lea is a huge fan of snowmen.  She was thrilled by the Frosty that we built in our backyard right after the Boxing Day snowstorm.  But that Frosty did not last terribly long.  His disappearance saddened Lea, who has mournfully exclaimed each and every day since then (and often more than once):  "Where's Frosty?  Frosty melted!"

She would have enjoyed seeing the one that was built quite quickly in the middle of Washington Square Park on Thursday: 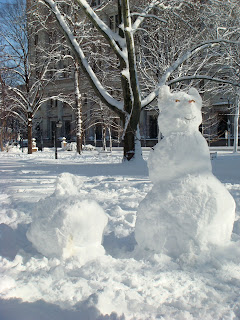 Alas, chief snowman technician (AKA Sharon) had to work on Thursday and Friday so we weren't able to get out and build Son of Frosty until Saturday.   But never fear; Thursday's snowfall was still with us by the weekend.  So on Saturday Sharon got to work.  This time around the snow was perfect for forming snowmen and Son of Frosty came out looking quite grand: 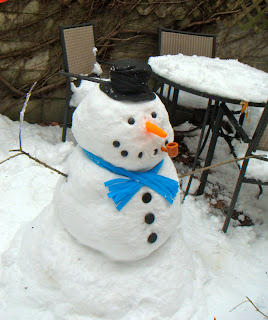 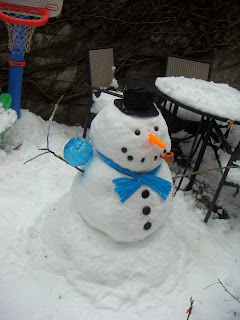 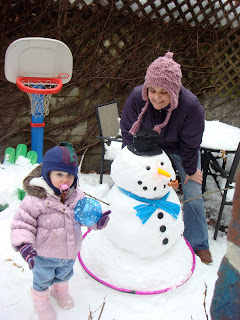 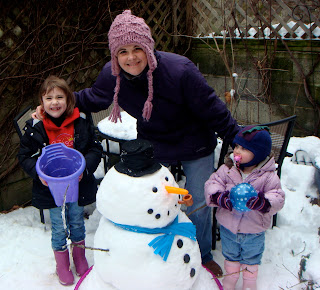 I think the juxtaposition of Frosty and our residual summer gear is hilarious.  I'm hoping that posing a snowman with a beach ball, hula hoop, and sand bucket will somehow act as a harbinger of warm, pleasant weather.


Meanwhile, we brace for yet another event (this one seems to be destined to start as snow, morph into ice and freezing rain, and maybe end as all rain, which will be followed by a major Arctic cold snap and yet more snow.  Holy Snow Squall Bat Man!
Posted by abby at 2:04 PM

That is the coolest snowman (no pun). As a tropical weather person, I have no clue how to put one of those together. But I can make great sand castles ;-)

We've got 15 inches coming this way starting about an hour ago.

And I thought it was always sunny in Philadelphia?

Love the snowman, so far we have not had snowball forming snow. I am happy to report we had a dumping last night and we spent the day shoveling (me with a shovel and Elizabeth with her mouth).