I know I'm a bit late in posting this, but it's taken me a few days to upload pictures and such.

Anyway, we ended up having quite a nice, and for us, quite jam-packed Mother's Day. It started out with brunch. Amazingly enough, even though we left our house around 10:30 or so and needed to be at speech therapy at noon, and even though everyone and his or her mother was out celebrating over Eggs Benedict, we managed to actually get seated, served, and eat and on and over the Ben Franklin Bridge in time for Hallie's session.

The restaurant, a Brady-Bunch themed place called Jones, is a pretty popular spot and it doesn't take reservations for parties under 12 (people...not age 12, unfortunately). But the day was bright, sunny, and warm, and no one was seated at the outdoor tables (a bit wobbly, but this just added an interest factor when Hallie banged it from her high-chair perch). We decided to avoid the interior madhouse (which really was quite crazy; the hostess was completely overwhelmed and the staff was practically juggling menus, entrees, and drinks and hoping they landed in the right place). This was a good plan: Hallie got to watch the street festivities (which included passing buses, horse-drawn carriages bearing tourists, and her favorite -- strollers with babies in them). She was very, very well behaved, and the server was super: he got Sharon her eggs benedict (which she proclaimed delicious and perhaps even better than those served up by our erstwhile favorite restaurant, Judy's Cafe, which sadly is no more) and I had a lovely toasted bagel (almost as good as the ones of my NY childhood and early adulthood) with whitefish salad. Hallie ate and retained her pears and goat yogurt and we toasted our success with mimosas and coffee. All consumed within 45 minutes. No parking ticket, either. Quite a feat really. 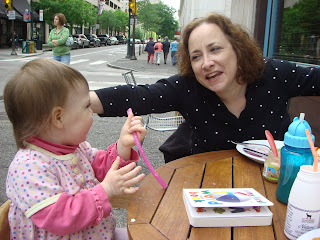 Hallie did well at her speech therapy appointment (she really is talking a whole lot more, trying to imitate or approximate imitation, and has about one new word a day. Words of the week include "silly"--which she simultaneously signs, or tries to sign; "belly"; "down" (sounds like "eee-dow"), an approximation of "blue"; an approximation of "Jenny" (her EI speech therapist); an attempt at "bye-bye", and something that sounds an awful lot like "yeah". She also consistently says "boo" (rather than moo) for the sound that cows make; "aaaah" for a sheep's baaah; and "hooo" for the sound made by an owl.

We then drove home from NJ; Hallie fell asleep in the car and napped for a bit in her carseat after we returned to Philly (Sharon stayed in the car with her) and then had lunch. She refunded some of her lunch, but this was, I think, related to getting a piece of goat cheese (soft chevre) lodged somewhere uncomfortable.

After that, we headed out to visit Pastorius Park and Olivia's Grove, which is our Mother's Day tradition. We brought some balls and frisbees with which to amuse Hallie.

The trees in Olivia's Grove looked lush and fuller than they had this time last year. The biggest of the trees (Chinese Hemlocks) was fairly sizable to begin with, but the others were quite small when they first were planted. Now they're filling out some and this is very nice to see. The first shot is a close up of Hallie in front of the big tree; the second shot gives you a sense of the larger grove. 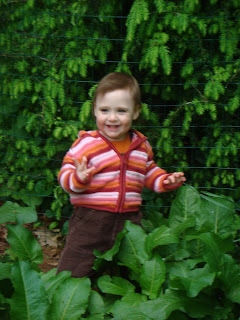 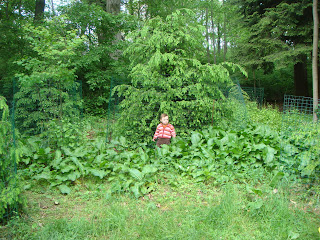 After spending some time at the grove, Hallie ran around on the grass. She played catch with both of us (I have a video of this that I will upload later; the kid really can catch), picked up sticks and twigs, pulled out some grass, and crushed a whole lot of butter cups. 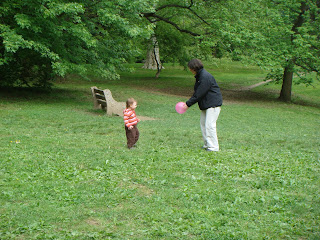 But her favorite activity was running with the dogs: Pastorius Park has a pretty large dog run and the dogs have a great time chasing balls, frisbees, their owners, and mostly each other. Hallie was intrigued.

What's interesting about Hallie is that, even though she clearly has an adventurous spirit and is not easily intimidated, she is nevertheless quite cautious in new settings and likes to hang back and take things in a bit before diving into a situation. We see this a lot at the playground where she observes and only then imitates the actions of other kids and is careful not to eceed her comfort limits. So, while she courted the dogs and chased after them, the second they turned and expressed an interest in her, Hallie backed off and shied away from them.

Still, she couldn't help but be interested in the doggies, and kept returning for more. She ran toward them, with them, and watched the action. 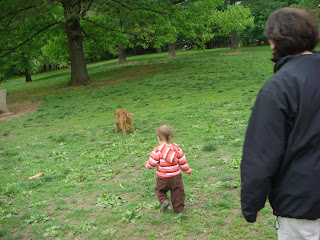 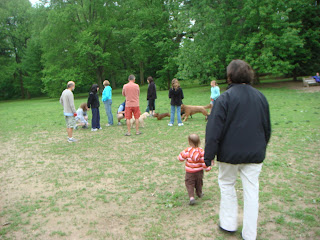 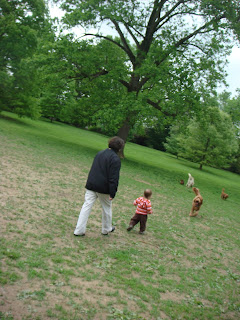 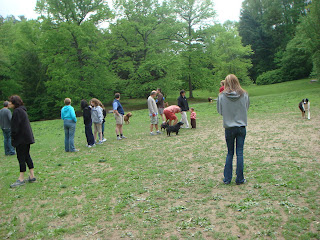 She was the littlest spectator at the dog run and a couple of dog owners took note of her and introduced her to a super friendly dog, whom Hallie hugged (in her signature way, which involves resting her head on an object of love) and kissed. I didn't get a great shot of this, but this is what she looked like: 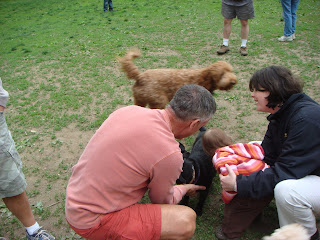 Anyway, Hallie had a wonderful and stimulating time at the park, and fell asleep very quickly once strapped into her carseat for the ride home.

It's a good thing we got out on Sunday, because later in the evening it began to rain and it poured all day long on Monday. Hallie could not quite understand why we had to stay indoors. I took her to the front stoop to show her it was raining outside and very raw, but this rational explanation did not much help.

So I decided to break out the finger paints to see if this would improve her mood. She had no problem getting down and dirty with them, but she was not all that into painting honestly. What she was into was "some" (her favorite word), which translated into me pouring more and more paints out for her. This was our final product: 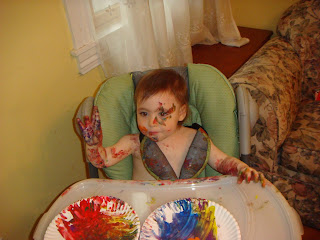 While I am not too sure that she's a creative soul when it comes to drawing and painting (she is more interested in her body as a canvas than paper, and she is much more intrigued at the prospect of taking caps off and putting them on markers than at actually using the markers, unless it's on her skin or clothing), she definitely is exhibiting a wild fashion sense. When I was getting her dressed on Monday, I chose the shirt and jeans, she opted to add the polka dot leggings. This was our final product (note: she kept socks on as long as she had on the leggings. The second we lost the leggings during a diaper change, the socks were off, and soon thereafter the pants): 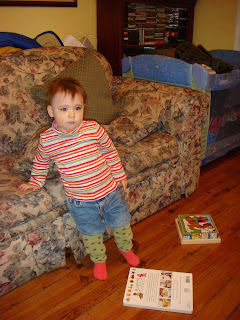 Otherwise, with the exception of the fact that we are pretty sure that the eye teeth (or one of them at least) have broken through and that the canines are well on their way, we've had an uneventful few days. No vomiting on Monday, Tuesday, or Wednesday, despite teething. So that adds four more days to our 2008 total, which I believe now stands at 44. I am beginning to lose track, and that is a good sign indeed. So this elimination diet (she eats pears, goat yogurt and goat milk right now) is working. Saturday we will try avocado and, if that works, or even if it doesn't, we will try rice five days from then. Maybe then I'll have half a chance of baking this kiddo a birthday cake for the big 2 in less than four weeks from now!
Posted by abby at 1:20 AM

She is doing amazing words-wise!! Now she just needs to pass some of that mojo this way ;)

It is so scary to me that Hallie's turning 2 so soon, as that means Sydney is not very far behind...eek. I have some vegan cake recipes that we've tried that are really good (so no milk or eggs) but they all have wheat...let me know if you want them though. One is a lemon cake and one is chocolate.

Thank you so much for all of the vocal cord information. It sounds like Kinnick's vocal cord paralysis is much the same as Hallies. Hallies progress really impresses me. I hope Kinnick is able to make the same progress.

i love the jewelry y'all picked up from julian and co. i just love mine. i love, love, love, love miss thing's messy, painted face. she is a girl after my own heart.
oh and abby i will have to take you up on that russian heritage education. maybe recommend some children's book titles for starters. i totally forgot that this was right up your alley when daniel and i worked on his project.
a belated happy mothers' day to you two!
hugs