And a Happy Holiday to All!

This past weekend, Hallie paid her first ever visit to Santa. Sharon has been a bit worried that Hallie will grow up an un-believer (that is, unfamiliar with the iconic Mr. Claus) due to our well-founded concern with germs and such (and, let's face it, there is probably no place more replete with germs at holiday season than the ample red-clad lap of Old St. Nick). That's why we refrained from introducing Hallie to the cheerful man himself (or at least to one of his many impersonators) during her first two Holiday seasons. But it seemed time to have Hallie make the great wish-granter's acquaintance (even though Hallie has yet to grasp the idea that you are supposed to let Santa know that you've been a good girl all year long and deserving of that special something as a result of this excellent behavior).

So it was off to Macy*s that we were headed on Sunday...but not before a nice trim-up by Grammy.

Oddly enough, I never knew that Sharon's mom, Jan, used to cut hair for a living. Had I known that, we'd have enlisted her support in mullet-removal a long time ago. 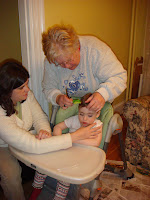 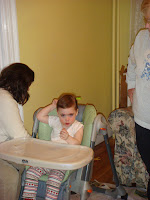 The final results are nothing short of great and upcoming photos will be featuring our well-coiffed girl in all of her glory. (Side note: the haircut makes Hallie look an awful lot like Aunt Laura--which we see as a very good thing. We often joke that Aunt Laura has strong genes: all four of her kids look a lot like her, and not like their dads, and now it turns out that Hallie also looks a lot like Aunt Laura and not particularly like Aunt Sharon or Donor 1876).

Anyway, I digress. On Sunday, after nap time, we bundled our girl, who was dressed in a festive red sweater and black velvet pants and who thus passed as easily for a boy as a girl (but then again, even when she's wearing a frilly pink dress on top of pink leggings passers-by often tell us that we have ourselves one handsome young man there...we're not sure why it is that hair length seems to determine gender evaluation, but whatever). We parked in the massively expensive lot at Macy*s Center City (formerly the flagship store of Wanamaker's) and headed up to the 3rd floor, which was home of Dicken's Village.

The line was very, very long but moved quickly. I attribute this at least in part to the fact that parents were frightened off by the village itself, which I deemed to be downright spooky. Here are a few images that convey the mood of the iconic Dickens' tale: 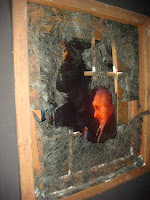 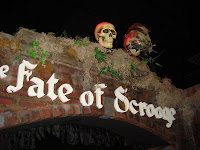 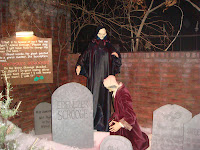 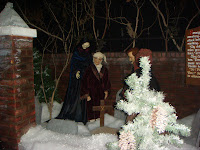 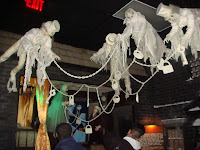 Hallie took the whole thing in stride, but one can easily see how, by the time one's child arrived at the end of the long journey through the re-enactment of Scrooge's encounters with the Ghosts of Christmases past, present, and future and his consequent growing understanding of his evolution into the very very nasty man he'd become, one's child would be scared silly and none-too-photogenic on Santa's lap as a result of this. 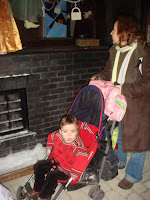 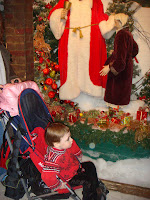 At the end of the hair-raising journey, we spilled out into a much more friendly space: 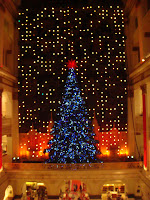 Then came the great Santa encounter. Hallie was appropriately apprehensive at the prospect of letting go of our hands (lately she insists that she hold both of our hands when out walking; this is very sweet). We convinced her it was okay to get on Santa's lap and that we'd be standing right by her.

She spent just enough time perched on his lap for the Macy*s folks to take this picture, which of course we had to purchase in order to commemorate the momentous event:

All in all, it wasn't too bad: Hallie did not melt down and the event did not turn into a fiasco (those of you who have witnessed--or can imagine the messy consequences of the hysterical tears and crying fits that result from Hallie being afraid---probably can conjure up how this whole thing might have ended....here's a hint: we probably would have been responsible for a pretty hefty dry cleaning bill for Santa's get-up).

And, speaking of get-ups, here's the latest fashion forward look from Hallie. Her brother, Jake, and his lovely mom, Gina, got Hallie some marvelous Disney princess dress-up clothes for Christmas, and Hallie is especially enthusiastic, of course, about the wide variety of shoes that accompany the princesses' outfits. Here she is modeling one pair, along with the fire chief hat that is one of her most favorite items of head-gear. 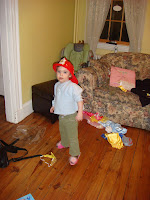 Who says that firefighters can't exhibit their feminine side?

We can't wait to thank Jake and Gina in person on Friday when they come to visit us in Philly!

Finally, if you're still reading this, I just want to wish everyone out there in the real and virtual world that we inhabit the most joyous of holidays. May your season be filled with peace and love and may your new year get off to a great start.
Posted by abby at 1:14 PM

I just love your posts--you are such a storyteller! I am totally there with you in Macy's although I have never even set foot in NYC. :) Happy holidays to all of you too--especially your femme-shod firefighter!

i always would joke that my circus clowns' encounters with the fat guy would only end in tears...and some years, as you have witnessed in the past, did.
miuss hallie survied and i imagine she will soon be sucked into his magical goodness in years to come...lucky you!
what we have done with danny-boy is take him 1st thing in the am as soon as the mall opens (after mommy has checked out the times when santa is there). that way the fat guy has not touched too many germy kids. we get in, get out and no one gets hurt.
happy hanukkah, merry, merry and happy new year to you all with extra special hugs to miss hallie!

Merry Christmas to you all. Glad the trip to see Santa well, I totally understand how different things could have been. I was just thinking today that I do not have that on guard feeling as much anymore Elizabeth is growing up and those 'moments' are becoming memories now. It really is a nice feeling, one day you will feel it too.