Raising the Nicest Kid on the Block

Hallie's in the middle of a developmental explosion and we're loving it. As she communicates more, and more fluently, with us, it's become clear to us that we've managed to raise a little girl who has a great deal of empathy with others and who is generally helpful and nice. We're not really sure what we did right, but we could not be more pleased with the results.

The other day, I was preparing dinner in the kitchen while Lea was in the exersaucer and Hallie was playing in the living room. Hallie came running into the kitchen and announced to me: "I go help Baby Lea!" and ran back into the living room. Of course, 'help' can take many forms in the three year old mind, so I did what any moderately sane mother of a preschooler and infant would do in such a context: I followed Hallie, just in case her notion of 'helping Lea' differed from my own. What I saw was this: 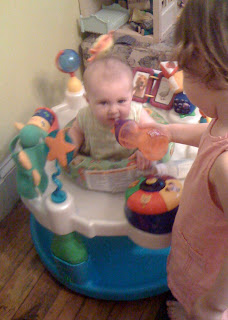 Hallie, as she is now wont to do, was narrating to Lea: "Mmmmm...Water good! Drink water Lea!" And Lea, being the little sport that she is (and very adventurous and curious in her own right), was playing along. She tried her very best to master the art of drinking water from a straw cup but couldn't quite get it together. Still, she very much enjoyed chewing on the straw (something that her big sister gets a kick out of, too, which accounts for our many jagged silicone straws). And Hallie felt very helpful.

Hallie also enjoys trying to give Lea her bottle. I caught one shot of this on camera: 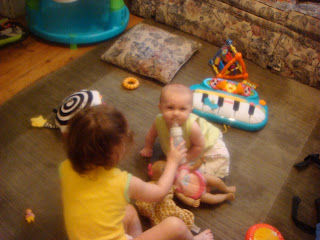 You'll notice that Hallie doesn't quite get the whole gravity thing so she isn't aware that she needs to tip the bottle at an angle so that the milk can flow. She also doesn't quite understand that Lea must latch onto the bottle to drink milk. So occasionally Hallie's ongoing efforts to provide Lea with her bottle at all points has led to a little spilled milk around here. (No crying over it, though. It's been a month since we had to supplement Lea's diet with some formula since it's impossible for Sharon to find sufficient time to pump at work, but Lea is still about 75% breast-milk fed and we no longer feel pressured or guilty about this since Lea is obviously thriving).

And Hallie is just generally a wonderful and adoring older sister. She loves to bring Lea toys (sometimes depositing these on top of Lea while she is asleep) and every morning when she wakes up, all she wants to do is hug and kiss and play with Lea. We took this shot of the girls (on Hallie's prompting) this morning (with Hallie very happily smiling for the camera, which is also a recent development): 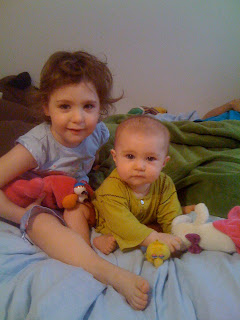 And most days, when I go upstairs to get Hallie after she wakes up from her nap, she announces to me: "I go find Lea Pia!" (this is one of our nicknames for Lea) or "I find Baby Lea NOW!" And, if Lea is upset for some reason, she asks us to sing her, and chimes in on, the silly Lea Pia song that I made up for Lea. She vastly prefers this song to her own (which is equally silly and entitled "Hallie Go-Bally")

But Hallie's sweet streak is not reserved for Lea. It turns out that Hallie has become a very polite kid who is pretty good at sharing. I credit this not only to lessons learned at home but to the excellent teachers who emphasize this skill at her preschool (which she sorely misses and which starts up again tomorrow--though she was all prepared to return today...when I got her into the stroller to take her to feeding therapy today, she announced to me: "We going to fun preschool now!"). Case in point: this past weekend, Aunt Laura and the kids gave Hallie a Radio Flyer scooter as her belated birthday present. All the kids were excited by this and, even though Hannah and Adam got out their own more advanced Razor Scooters, they both were interested in taking turns on Hallie's shiny new red one. Hallie was a bit upset at first when Adam started to careen through the house on her scooter, but did her 'waiting sign' (we have taught her to sign "Wait" in ASL when she needs to wait for something and she now does this reflexively...it's a great sign since it allows one to fidget with one fingers which is pretty perfect for kids with sensory issues who have trouble waiting and need to do something with themselves in the meantime). When Adam returned on the scooter to where Hallie was standing, Hallie turned to him and said, "Now Hallie's turn, please!" Sharon convinced Adam to more or less graciously disembark and let Hallie have a ride around the house. Hallie took the scooter for a spin, returned to Adam, got off the scooter and said to him, "Now Adam's turn!" We were very proud of this behavior. Turn-taking is not something that comes naturally to kids (who are, after all, pretty darned egocentric) but somehow Hallie really has begun to assimilate this skill. She's demonstrated this recently at play with her peers and we couldn't be more pleased about this.

And speaking of playing with peers, this past weekend when we were down at the cousins', Hallie began to initiate play with them, and not just follow along or do parallel play. She did this again last night when Karina popped over for a bit. She was very comfortable saying "Come on, Karina," and showing Karina the toys in which she was interested and how she wanted to play with them. We're very much hoping that Hallie is able to do the same thing with her friends at school tomorrow.

And, speaking of tomorrow (which is, indeed today), I've got to go turn in so that we can get up early, feed Hallie breakfast, and get her off to school by nine.

But one last note on the feeding front: Hallie, who is very susceptible to peer pressure, decided to finish off Hannah's peanut butter sandwich on Saturday and had no bad reactions to it whatsoever. She's eaten bites of peanut butter sandwich a few times since then at home (she can make it through about a quarter to a third of one sandwich). This is exciting because it gives us a new protein source and one that is naturally packed with calories and fat and easy to bring to school (her school permits peanuts since there are no kids who are deathly allergic to them, at least at this point in time) and pretty darned age appropriate. And Hallie has been enjoying toast with butter (fake butter) and cheerios for breakfast a lot, too. She's also become a fan of spaghetti and other long noodles (like lo mein) and the other night had some spaghetti with tomato sauce that also contained a nice quantity of spinach and some Italian sausage. She even entertained the concept of eating a piece of broccoli that accompanied a veggie lo mein I bought for her at Whole Foods (she identified it, told me it looked like a tree, touched it to her lips, licked and nibbled it and announced "Mmm....broccoli good" before discarding it). She doesn't eat much, but she is eating enough. More importantly, we've taken much of the stress and pressure out of eating and hopefully this will make mealtimes more enjoyable for her. And, along with this, she continues to not have major vomiting episodes. We are up to 170 days without spew this year and are loving every day of it!
Posted by abby at 1:11 AM