Ushering in the New Year at CHOP Sharon took this picture of Hallie just around the time of her admission last night (or early morning, really). It took a while for the nurses to start Hallie's IV so that she can get antibiotics and fluids into her system and then even more time to find a room for her. Hallie and Sharon weren't settled down into their new (and hopefully very temporary) digs until around 4am. As you can see, Hallie was exhausted. She was a great patient though and balked only at the blood pressure cuff and IV stick; otherwise, she was a charming little girl who cooperated with her nurses and doctors throughout the whole process and kept thanking them for doing things like taking her temperature and listening to her heart and lungs.

Meanwhile, back at home, Lea and I found ourselves awake, too. Neither dark quiet time nor a bedtime bath really settled Lea down. She was missing her mommy and interested in going to sleep in her arms (and at her breast), not mine. Finally, some very vigorous rocking did the trick at around 2 am. I collapsed in bed with her, my bottle in the cooler at the bedside ready for when she inevitably woke up seeking out Sharon to nurse. That happened some time between 6 and 7 am and Lea's response to the bottle was none too pleased. When she realized that mama, and not mommy, was in bed with her, she began to thrash and kick and give me a tongue lashing (she makes these very annoyed back-talking sounds --a very guttural and prosodic "rah-rah-rah-rah-rah" that suggest her deep displeasure with you when you don't do something she wants to do or deny her something she wants to have). I whipped out and presented the bottle to her but she was having nothing of it and began to kick me more fiercely. Then I tried to place the bottle in her hands (she likes to hold her own bottle and not have it held for her). She grabbed it and threw it at least a foot. And began to thrash, kick, scream, and backtalk some more. This lasted about fifteen minutes. She then seemed to collapse from exhaustion but in fact was only gathering more steam for the next battle, which lasted just as long. Finally, some time after 7, I managed to shove the binky in her mouth and get her to sleep.

Both Lea and Hallie slept until well past 11 am. The nurses and doctors assessed Hallie while she was asleep and decided that she needed to spend another day and night at CHOP: it seemed imprudent to discharge her because of her oxygen saturation, which was hovering in the lower mid 90s (93-94) and never exceeding 96; needing to make sure Hallie wasn't reacting to the antibiotics she was being administered; and the very real need to ensure that Hallie doesn't get dehydrated (which is especially a problem now that she is refusing to drink her milk entirely and is seriously limited in terms of intake more generally---she looks painfully thin right now). Fortunately, Hallie did not need to be placed on oxygen, but she needed (and continues to need) IV fluids right now.

Sharon did find out that it would be possible to bring Lea over for a visit. I was of two minds about this: on the one hand, Lea missed her sister and needed to nurse (and Sharon needed to nurse her just as much). On the other hand, bringing her to CHOP places her at a greater risk of picking up some yucky bugs (it places Hallie at just as great, if not a greater, risk, too). But we decided to bring her in since we could keep her in the room with Sharon (there's a pretty comfortable bed/couch for parents in the room). So Aunt Renee shuttled us off to CHOP early this evening and we spent a few hours there.

At first Hallie was pretty lethargic and subdued. Renee was worried about this. But after a popsicle, she perked up and we took the kids on a wagon ride through the hospital. The kids had a blast (and particularly enjoyed the relatively fast downhill run in the corridor between the main hospital and the Wood building). 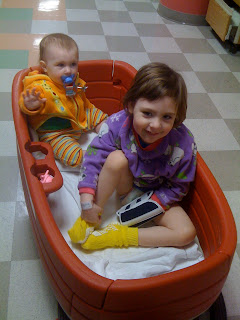 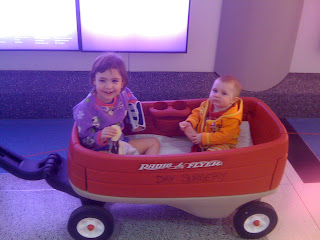 but once 7pm rolled around, Hallie was exhausted and weepy again (this has been the trend the past few days). She was none too thrilled about eating her dinner and managed only to get in a couple of bites of fish stick, a slice of apple, one fry, and four sips of apple juice. (Lea, in contrast, happily ate a bunch of food, of course). She quickly began to lose it, so Renee, Lea, and I headed home. An hour later, Hallie was up and crying for me. This broke my heart. She was inconsolable and, as of my last conversation with Sharon at midnight, remained so.

Lea slept happily for a couple of hours and is now awake again. I fed her some more food (the kid can eat), another 6 ounces of bottle, and changed her diaper and got her into jammies. And as soon as this is done and posted (in a matter of seconds), I'm going to try to get her down again. Anything short of 2am will be a victory, of sorts.

So this has ended up being a very different way of ushering in 2010 than anyone ever expected, but hopefully things improve from here.

I hope everyone out there reading this had a happier new year celebration and wish you all health, peace, and love in 2010.
Posted by abby at 12:18 AM

My son is just a little younger than Lea and I can totally relate to your post about her eating and trying to get her to sleep! Sam has decided he's over the binky and throws it across the room when we offer it to settle him down.

I really hope Hallie is better and released soon. Maybe you guys can pretend the New Year wasn't ushered in yet, and have a "redo" when you are all under one roof.

So sorry to hear that Hallie's in the hospital! I hope that she's feeling better and you are all back together at home soon.

So sorry to hear about Hallie's hospitalization. We will pray for a speedy recovery and some good rest for all.

Glad to hear that Hallie is home and things are heading back to normal!

I'm so sorry, for the yuckiness and monitors and scares and what a rotten way to start the new year. I'm hoping and praying she mends quickly and you are all back home together SOON.

I hope she gets home soon. We would think that these times should be behind us but they unfortunately are not. Elizabeth has spent the past 2 weeks battling something similar and we have spent many hours seeing Dr's. I find December is the month of the big illness, it has been like clockwork for the past 5 years for us.
Happy New Year, hopefully this New Year was just the finale of 2009 and 2010 brings less of these preemie issues.

I really hope Hallie is feeling better and will go home Saturday. You guys are going to need another vacation to recover.

I hope day 2 of the New Year goes much better!