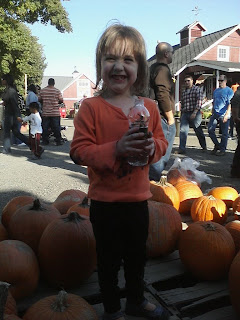 Hallie is extremely fond of a good metaphor.  Here are just two recent examples:  Papers fluttering in the breeze "look just like leaves on the tree."  The argyles on her socks this morning "look like diamonds; they are just like the kites flying in the sky."  So I suppose that we should not have been surprised when she came out with the following the other night:

Hallie and Sharon were in the bathroom for pre-bedtime hanging out on the potty.  Hallie let out a very loud fart and exclaimed, concerning the constipation that apparently was the underlying cause of this:  "Mommy, there's a traffic jam in my tushie!"  We found this hilarious and quite clever.  And also promise to delete this post from our blog before it can become a source of embarrassment to our poor kiddo.

On an unrelated matter, Hallie apparently has apparently embraced the roles that Sharon and I have carved out for ourselves (by design or by necessity).  The other morning, Hallie was talking about an upcoming visit with friends and family (loosely based on a melding of a real impending outing with an imagined one fashioned after an episode of Mickey Mouse's Clubhouse).  She was describing how she'd be taking a choo-choo train and said, "I'll sit next to Hannah and Adam and right near my friends Eliza and Taylor.  Mommy will be in the diamond car."  I innocently inquired:  "where is Mama going to sit, Hallie."  Hallie pointed to me and stated, emphatically:  "You're staying here Mama.  You'll be in the kitchen, cooking."   I guess she notices that I do all the cooking around here, no?  Given Hallie's relationship to food, however, I am not sure whether this is a compliment or an insult.

The outing that we went on, to a local farm/orchard/pumpkin patch, was organized by our friend Anne, mom to the one and only Eliza Grace.

The farm hosted a small array of barnyard animals, a wagon ride around the stable, some toy tractors and John Deere trikes that the kids could toodle around on in the yard, pumpkins to pick and to decorate, and pony rides.  Our kids loved the animals the most and Lea was thrilled to have a chance to ride the horsies.  They also got into painting their pumpkins and listening and dancing to the band.

Halloween has long been one of Hallie's favorite holidays.  I'm not sure if it's the dress-up aspect (she loves clothing adorned with witches, and pumpkins, and ghosts, etc, as well as full-on costumes), the controlled spookiness of it all (Hallie has been talking about goblins and other scary creatures of late), or just the chocolate (the kid does love her chocolate, but only the plain stuff).   Or maybe it's the fact that she came home from the hospital ten days before Halloween and this is the first holiday of the year that she spent with us?  Who knows.  Whatever it is, it's great fun to see her so happy.  And since Hallie's happiness is infectious, we all end up smiling a lot this time of year, too. 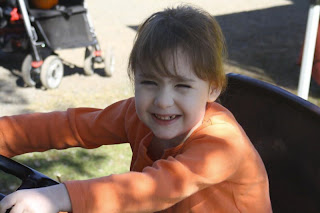 Hallie astride the biggest pony at the farm: 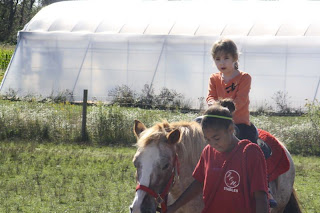 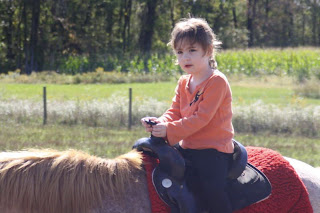 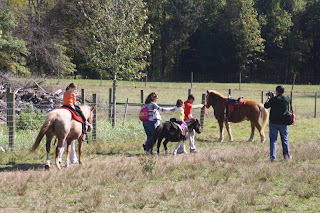 Hallie and Lea dancing around and being silly. 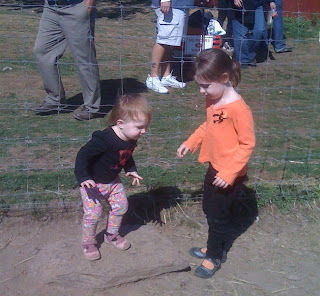 Lea taking her turn on the pony. 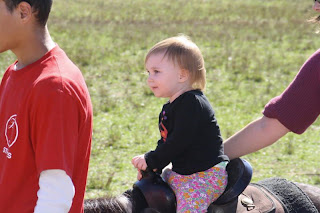 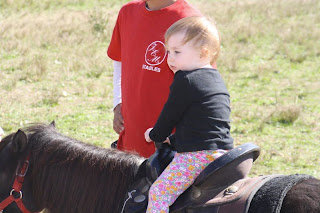 Me giving Eliza Grace a ride. 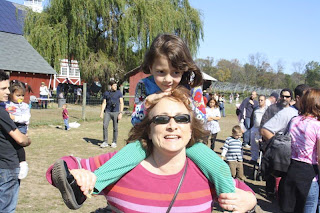 She also rode a pony and looked good doing it. 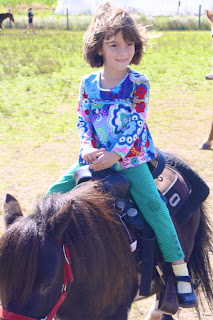 And of course the kids had fun clamoring on a miniature John Deere tractor. 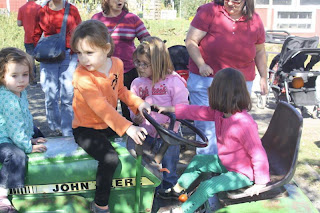 A great time was had by all.  Unfortunately, Hallie did develop the sniffles by late in the afternoon.  In retrospect, she appears to have been developing a cold all week (hopefully not a result of the flumist.  Now that she had her bout of pneumonias, I do think it's time to return to the conventional flu shot instead).  But she began to seem run down by late in the day yesterday and has gotten worse throughout the day today.  By tonight she was running a fever of close to 101 degrees.  We're hoping that preemptive flovent and albuterol will keep the junk out of her lungs.  Please cross your fingers on this one since we really cannot (or at least do not wish to) return to the cycle of pneumonias that plagued our kiddo for the better part of last winter and spring.
Posted by abby at 11:51 PM

I hope Hallie is feeling better?

The girls look so big!