'Before' and 'After': The Fifth Edition

Hallie had a relatively low key fifth birthday:  as she does most every Saturday, she spent the morning at hippotherapy in West Chester.  Indeed, most of the afternoon was spent at a fun birthday party, just not her own (ironically perhaps, it was for twins born a day after Hallie who are enrolled in her preschool class).  Hallie seemed to be okay with not having a big party on her big day and is eagerly awaiting her turn to host an assorted bunch of crazy (in the best possible way) five year olds which will come in a couple of weeks.

But even if we didn't have her party today, we both knew that we needed to celebrate Hallie in one particular way:  we needed to bring Hallie over to the Pennsylvania Hospital Intensive Care Nursery to see some of her first friends.

At first, Hallie was appropriately shy (a word that she has begun to use quite recently, and with great effect).  Even though Hallie read the signs on the walls and knew that she was in the 'nursery', she had no idea why we were schlepping her there.  Those developmental visits to the ICN ended way long ago (too long ago.  Note to NICU professionals reading our blog:  consider following up kids through at least age five or the onset of elementary school.  Hallie was discharged at age 2 corrected with little notation of her delays/disorders.  We are savvy and well-educated and have sufficient insurance to have hunted down referrals to developmental pediatricians and gotten Hallie into oodles of therapy.  The results of these interventions are very clear, as I shall show below.  But not everyone has the resources we do and some people optimistically take 'discharged at 2 corrected' to mean 'caught up by 2 corrected' and are blindsided by the problems that arise down the road.  End of speech, sound of getting down from soapbox). 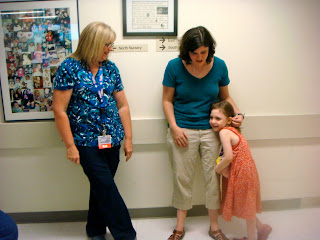 But then Sharon had the brilliant idea of using Hallie's favorite literary form, of all things the 'knock-knock' joke, to help break the ice.   Soon Hallie was regaling the nurses with the sort of inane, meaningless, and absolutely hilarious 'knock-knock' jokes that are the fare of typically developing five year olds everywhere (or at least among her peers at the YCCA). 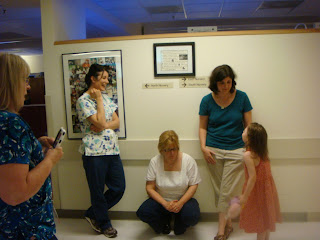 Hallie's joke telling was incredible, but even more incredible were the peals of hysterical laughter that she emitted at her own jokes.  I am hoping that the nurses would tell the parents in the ICN who were hovered around the isolettes of their extremely premature babies that the funny five year old to whom they were listening resided, sometimes in a rather precarious state, in the ICN's nurseries (she was a resident in three out of four of them) for 121 days, often hooked up to various life-saving machines and devices, and was never expected to turn out like this at all.


And on that note, I leave you with the 'before' and 'after' shots.  Here's one of Hallie during the first week of her life: 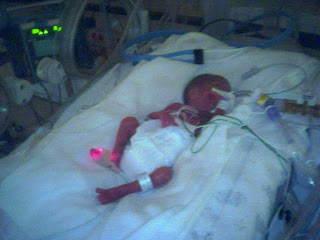 And here's Hallie (and Lea) with one of Hallie's primaries, Corinne: 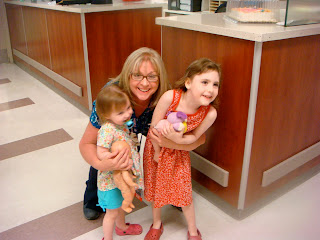 And, finally, here's one of Hallie with her very first friend, Ellen, who was the first ICN staff member whom we officially met, and who has, indeed, remained a close person in Hallie's life: 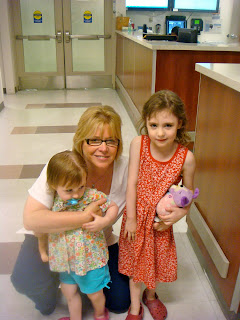 Hi! I'm new to your blog. We have a former 23 weeker and I just love seeing the growth and progress you write about on your blog. Thank you!

Wow! Talk about achievement - Hallie's 5th birthday is absolutely something to celebrate. Your dedication is also worthy of some celebrations too. Thank you for sharing :)

Wow! This is amazing - you're all amazing! Thank you for sharing your story. And Happy Birthday Hallie!