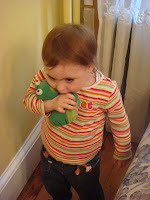 When not overworked by our day jobs or run ragged by our extremely active toddler, our entire family has been huddled around the DVD player watching the pre-release version of Baby Signing Time: Volumes 3 and 4 (A New Day and Let's Be Friends, respectively) for the better part of two weeks now. Suffice it to say, we're hooked. These are truly excellent resources, not to mention plenty fun for toddlers to watch.

OK--so what makes these DVDs so great? All of you who have been following this blog already know that we're big fans of the regular Signing Time series and that Hallie has been watching these over and over again now for more than a year. We credit Signing Time and Rachel Coleman with many of Hallie's speech advances and her knowledge of the English alphabet, as well as with her acquisition of lots of ASL signs. So we were a bit unsure how Hallie would respond to 'stepping down' to Baby Signing Time. As soon as we put the DVDs on, all of our fears were allayed completely. If anything, Hallie seemed to like Baby Signing Time even more than the originals.

All babies love babies, and our toddler is no exception. Watching the slightly older children in Signing Time is exciting for Hallie, who loves to mimic whatever it is that they are doing (we now credit Rachel Coleman with teaching Hallie how to jump) but interacting with the babies captures her attention even more effectively. Presenting animations of Leah and Alex is not only a very smart way of dealing with the issue that both are no longer toddlers anymore, but the animations are also fun and friendly and resemble Leah and Alex sufficiently to appeal to a child who is familiar with what they look like now. Hallie was immediately able to tell who the characters were and referred to them by name.

On balance, there is a nice mix here in terms of the use of animation and real people. The graphics--both those used in the animation and those used in the background scenes--are simplified ones. They are not very 'busy' in terms of what they contain, and colors more often than not tend to be muted. This probably helps avoid overstimulation and allows Rachel to highlight the important information about words, signs, and concepts that she is trying to convey to her toddler audience.

The format of these DVDs really rock. The shows contain a wonderfully natural progression that reinforce learning at all stages. Rachel begins each sign with a very good description of how to make it that is quite precise. Then the sign is demonstrated in front of muted graphics. This is followed by a child acting out the concept (strolling in a stroller, for example) and finally children use the sign in the natural environment that a baby or toddler is likely to encounter. This makes the DVDs an ultimate teaching tool because they don't just teach signs for words but the concepts themselves (for example, opposites) that every baby and toddler needs to know.

The almost constant songs are stimulating and really capture a kid's attention; there is a lot less speaking here than in the older-kid version of Signing Time and this makes it ideal for very young children who respond more quickly to songs than to any other medium. The medium of music is also very well suited to children with speech delays who often learn to mimic sung speech more quickly than its spoken variant.

The lyrics on these programs are far less complicated than those featured in the original Signing Time series. The songs tend to build around the repetition of the central word being taught and reinforce the spoken word and the sign through consistent reiteration. This seems like a very effective way to teach the concept, sign, and word simultaneously. There is not a lot that is extraneous here both in terms of the signs and the words used in the songs. This works well because it avoids distracting attention from that which Rachel is trying to teach. And, as in the original Signing Time series, but at a more introductory level, the songs review the signs that Rachel has already introduced, once more underscoring the importance of the notion that repetition is the key to learning.

Some of the signs/concepts/words featured in these DVDs are related to the weather (sunny, snow, rain, wind, clouds); motion (stop and go; strolling); times of the day (day and night, today; emotions (feelings, happy, sad). Once a child learns these, he or she will have ample opportunity to use them in his or her daily life. Watching these DVDs with our little ones--something that both Sharon and I believe to be essential--will allow us parents to learn the signs quickly, too, so that we can use them with our kids and further reinforce the ideas behind them. Just taking a walk outside with your little one in a stroller would allow you to use the majority of these signs in one fell swoop. And the catchy songs give a parent a great way of doing this musically; I, for one, never mind when Rachel Coleman's lyrics colonize my brain.

Anyway, to sum up---Hallie loves these, and we love them too. The songs are great, the format is great, and the content is fabulous. We credit Rachel Coleman with teaching our little one so much. Hallie has a great vocabulary -- both ASL and English. Signing Time is a large part of why she is so excited about learning and finds it so much fun.
Posted by abby at 3:40 PM

Thanks so much for the info. Hmmm, sounds a little different than what we have gone through. Sam had chronic C.Diff colitis as an infant and chronic ear infections, dehydration etc. WE were always in the hospital. They believe he got the C.diff when he was in the NICU. He ended up being allergic to the antibiotic used to treat it, so then ended up on another one for a total of 12wks around his first birthday. Also aroudn that time he was diagnosed with an immune system deficiency, specifically IgG-1 and IgG-2. We started Gammaglobulin treatments a year ago and illness wise there has been an unbelievable improvement. I also breastfed him and noticed a change but everyone kind of poo-pooed my observation. Well in june of this year he started actually stooling blood. I of course in the beginning started asking if it could be allergy related but his GI doc didn't want to have anything to do with it. So he has had a G-tube placed, endoscopy, colonoscopy and now they want to repeat it with the addition of a tiny capsule (with camera) allowed to go through his small intestines to take pictures. Sam also runs lots of fevers up to like 105 with no know cause. Is that possibly allergy related in your experience? We have been tested for cancers, other immune system stuff, celiac disease, etc etc. He was a hard transition to solid foods and eats very STRONG tastes and is weird about others (LIKES: broccoli, craisins, baby food stage 2 green beans, carrots, noodles with butter, grapes, fish, steak) (DISLIKES: eggs, bread, pancakes/waffles, sandwich meat, cookies, bananas etc) I have also had the sneaking suspicion that every time he eats he has a stomach ache, but again no one listens to me. There are days he won't eat or drink anything at all, and now at two he actually tells me his tummy has a boo-boo. They said he had reflux as a baby and I tried the medicines but didn't fully believe that he had reflux, and they didn't work anyways. He had flare ups with the puking whenever he had colitis. He rarely throws up now, but has diarrhea chronically. He amazingly is still growing although has lost some weight since the spring and is just starting to gain it back. I know what it is like to have an active toddler (EXHAUSTING!!!!) and I also have a six month old daughter. Even more tiring:-) PS you are expecting right? Congrats!!! Oh by the way I am Danielle

hey my email is: mssweetpea2000@yahoo.com. Not sure if they checked for Eosiniphils. I will call his GI to find out. I don't have an incredible amount of faith in our GI either. He is running intermittent fevers again and his primary who is great wants us to see another specialist. It seems so crazy, you look at him and he seems so healthy most of the time and then the poop hits the fan and we are dealing with another whole issue. Thanks so much for the info. I really appreciate it. I am totally stressing and it is so hard trying to figure out Sam and then also taking care of my daughter, who so far (thank God) has been healthy.

Congrats on making the top 10 review. :)