Why Buildings Now Stand: The Portrait of a Young Girl as Architect 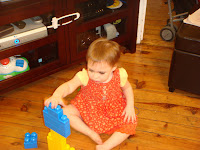 Hallie has owned blocks since before I can remember. We got her the soft Parent blocks first, then some fisher price blocks with 'grippers' on each side that were supposedly easy to stack, then some peek-a-blocks, then some bristle blocks, and of course lots of mega blocks. Hallie was pretty uniform in her use of these blocks: she threw them all over and loved dumping them out of the many bins that we needed to purchase for our overwhelming number of blocks. She was also a master deconstructionist (and not of the Derridean variety, either). If I built it, she knocked it down. She could have authored Why Buildings Fall Down: How Structures Fail had Matthys Levy and Mario Salvadori had not beaten her to it first. However, there was no way in the world she could have written Salvadori's companion book, Why Buildings Stand Up: The Strength of Architecture. At most, she'd cantilever a few mega blocks (Frank Lloyd Wright might have been proud, but then Falling Water is apparently falling into the water, so I'm not sure what to make of this). But mommy, who just happens to be an architect, not so much. Our girl showed approximately zero interest in and even less aptitude for constructing things.

Until yesterday. Hallie asked to play with her blocks and actually began to build with them. She seems to prefer monochromatic patterns (all the yellows together, all the blues together) and has an adventurous style wherein she tries to put wider structures atop narrower ones. But she is building with her blocks and has made her mommy proud. So I guess we can put this concern to rest, much as we did when she loved to dump things out of containers but never back into them. 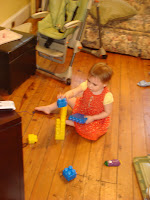 And one more milestone, while we're at it: Hallie's speech therapist taught Hallie that the proper answer to "What is your name?" is "Hallie." We've been trying to get Hallie to answer this question forever (more or less) and today she learned to do it in five minutes. We're not sure whether this will stick, but it's a nice addition to her list of social communication, which thus far has been limited to "Hiiiii!!!!" "Bye!!!!!!" "Please" and "Thank you." Sadly, "uh oh," and much less "Elmo", "Abby" and "Pigeon" aren't really great conversation-starters (even for the two-and-under set).
Posted by abby at 11:34 PM

horray for Hallie! She looks like she's concentrating so hard! She also looks beautiful though...I'm glad she's doing so well.

That's all, really. I am amused.