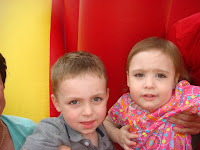 As many of you know, Hallie was conceived using donor sperm, and way-back-when before this micropreemie journey started, Sharon and I joined the Donor Sibling Registry so that we could find out about the other children whose parents used the same donor. We already knew that there were pregnancies reported, but we had no idea how many or where the parents were located. And we also thought it would be a good thing to have potentially useful health information (turns out that we were right on this one, and that more than several of the donor siblings have allergies--seem to be primarily atopic stuff, but this is related to food allergies).

Anyway, we found out very quickly that the mom of the oldest donor sibling, who is now 4, had started a yahoo group for 1876-ers (the donor's number). I forget now at that point how many parents had registered or how many siblings there were, but there are now about 15 to 20 kids (one set of parents have two babies from the same donor) who are spread out across the country and who have all kinds of families (some with a mom and a dad, some with two moms, and some with a single mom; no two dad families yet, though). There is, I believe one other set of twins (in Puerto Rico, I think). The parents post updates about their kids from time to time, and we've come to learn that many of our little ones are enormously tall and sturdy; they don't like to sleep much; they do like to be incredibly active; and they give their parents a run for their money. Most of them have very straight hair that's on the fair side and many of them have very very pale skin. That certainly holds true in the case of both Hallie and Jake.

We also found out that we were not the only ones who had pre-term labor, but in all of the other cases, the labor was caught in time. There is one other preemie in the group, but she was a 34 weeker feeder-and-grower type.

At first I thought that none of the siblings lived anywhere remotely near us, but that turns out to have been wrong. We just found out this summer that Jake and his mom live a mere hour away in central New Jersey. We were thrilled to be invited to Jake's third birthday party, which took place last weekend.

Jake and his mom and her family and friends are super and we felt right at home immediately. Hallie had a blast playing with Jake, his little girlfriend Jordan, and the other kids at the party. , Jake's mom, and her friends,took Hallie under their wings (or at least gave her butt a nice boost) when she scrambled repeatedly up the huge inflatable slide bouncer (that's the best I can do as far as naming this immense structure!) that they had set up in the backyard for the occasion. Hallie is intrepid--she knows no fear where climbing is concerned (unlike her less-than-intrepid-but-bookish mama). Sharon, obviously, wasn't going to take on the climbing wall and bouncer at 19 weeks pregnant. So we were thrilled that Gina and her friends were willing to keep an eye on our girl and facilitate her incredible fun. 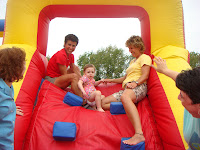 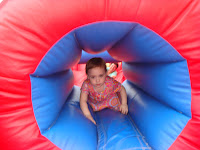 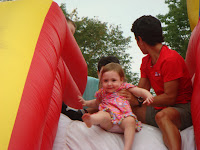 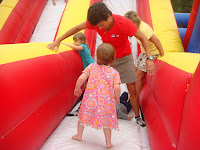 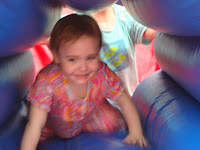 Hallie and Jake scrambled up the slide like pros: 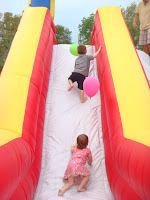 And had fun hanging out at the bottom, where they bounced and rolled around: 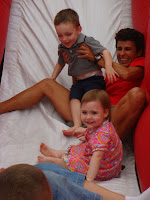 Here's one of all the little kids in a group photo: 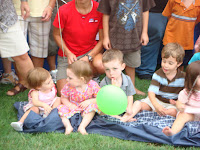 And finally a nice picture of the birthday boy alone. Isn't Jake cute? 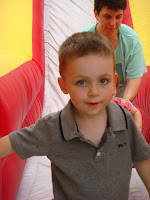 We have plans for lots more meetings, and hopefully the next one will involve pumpkin picking. Hallie LOVES Hallowe'en (for some unknown reason; perhaps she understands that it was her first holiday at home?) and we could use some nice pumpkins around here. So we can't wait to see them again and have some more sibling fun!
Posted by abby at 3:33 PM

Wow - you can definitely see the sibling resemblance there!

I agree with Sarah...they really do look like siblings. It's so neat that Hallie gets to meet him and his family.

I'll third that statement - donor 1876 has some STRONG GENES, man!

Is the new baby from the same donor or a different one?

Same donor, so we expect that the baby will definitely look like 1876... It's sort of weird to have a kindergarten picture of him and not much else to go by in terms of visuals. But we know he is smart, musically-oriented, and quite tall (6' 5"). I'd bet he's also strong-willed, if our experience is indicative of anything...then again, so is Sharon!

how cool this is to connect. i do see a resemblance between jake and hallie.

That is so cool, and both of the kiddies are adorable =)!

Gosh, I just think that is SO COOL that Hallie and Jake have had the chance to meet! And that Hallie's new baby sister will also be biologically her sibling as well... What an awesome time we live in that such things are able to happen for such as wonderful family as you all:)

Very cool! They look very similar!!!! What a great thing to connect with Hallie's half siblings!

This is Jake's mommy and I can tell you that it was absolutely AMAZING to meet Hallie (and Abby and Sharon too, of course)!! She was the hit of the obstacle course...anytime she went through there was this big crowd of kids and adults in front and behind her (not that she needed it, she was fearless).

I have a couple of INCREDIBLE pictures of them where you just would NOT believe the resemblence (you can see them at meetjakeanthony.blogspot.com). We're SO happy to have met them and hope that we will all get to spend much, much more time together as these two adorable kids (and one more to come) grow up!!!

Gina and Abby -- Let us know if/when you plan another get-together. We might be able to join (we live just outside of DC and Philly or NJ is an easy trip -- well, "easy" with a 2.5 year old is another matter). I'd love for Ben to meet his half-sibs, and I can't believe how much Ben and Jake look alike. It would blow my mind to see all three of them together!
- Rebecca