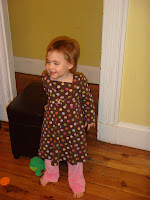 Far from it. I'm busy at work on my post reviewing the soon-to-be-released Volumes 3 and 4 of Baby Signing Time. Oh yeah, and chasing around a very active, quite adorable nearly-28 month old with a penchant for strewing toys about and writing on the walls in marker that is getting ever-harder to remove with Mr. Clean Magic Erasers (please note: the originals work better than the cheaper Safeway knockoffs). Oh, yeah, and holding down a full-time job, too.

But in the interest in not losing our candidate's--oops, I mean our kid's--audience, I bring you the following:

Hallie has had a wonderful, nearly vomit free weak (sad when that's the headline, but such is life with a food allergic microtoddler). She is now on day 117 of vomit-free existence and the only incidents this week (2 small ones) related to a. her mommy trying to forcibly excavate a booger from Hallie's nose and b. Hallie's ingestion of a stub of a french fry she found on the floor after dinner on Thursday night. Neither are of terrible concern to us, and in days gone past, we wouldn't have even counted them.

Hallie is also being extra cute these days. She has long done this thing where she hugs an object tight, lays her head on it, etc. That on its own is really cute, but we've fairly recently discovered that this is a signal that she wants a hug from one of us. We always oblige, and this seems to have reinforced the behavior and taken it to new lengths. These days, our favorite huggable object is a small speck of toilet paper---Hallie will unwind some from the roll, will usually stop when we ask her to, but by then will have pulled off a few sheets. She'll hand us all but the tiniest bit, and hug it fiercely and then lean into whoever is with her for a hug. Very very cute. And extremely silly, which sums up our kid pretty well. 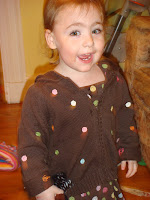 Hallie now knows all of her animal names and sounds (and many corresponding signs) and will walk around pretending to be a monkey, or a duck, or a kitty on cue. She also appears to have picked up the names of some more obscure animals like panda bears (not polar bears yet; she isn't quite at the point where she is working on endangered species). And she's begun to fill in the words of her favorite song---"Sing, Sing a Song"---which we'll often sing before bedtime. She even sort of sings it, which is very sweet. She's long been filling in various words from her favorite books (Mr. Brown Can Moo, Can You; Don't Let the Pigeon Drive the Bus; The Pigeon Finds a Puppy among others) but now seems to know which words they are on the page, and will turn to the correct page when we ask her to do so. She is one smart little cookie.

And finally, in addition to enjoying writing on the walls, she's also really into stickers right now, which she likes to plaster all over my body, Sharon's body, her own body, the floor, and every other surface imaginable. 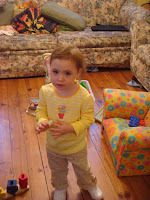 She also likes to place them on her tongue (think communion wafer) and then race off around the house while we chase her down so as to avoid any 'incidents.' This has turned into quite a sport for her (as has her naked run from the bathtub while I try desperately to dry her off and prevent her from slipping on the floor). What a silly little kid we're raising!
Posted by abby at 1:57 AM

Ooohh...we're jealous that you have BST volumes 3&4 already. We want to see them.

My silly little niece is 5 and she still does the run around after her bath thing. Thankfully she'll now do it wrapped in the towel so is kinda getting dry and also most of the floors in my parents' home are carpeted. I would be so scared if they had hard wood floors like you do, they can get rather slick when wet! Oh well, as Niecey has taught me many times, kids bounce, it is the adults who have to worry! Evidence, if I climbed up and fell off something and hit my head I would not be climbing again anytime soon, Niecey would go to climb the same thing before the tears dried.

A full-time college professor being busy? If your schedule is anything like my boss's that would be an understatement! Hope you get some time to relax with all the craziness going on.

Hi there, I hope you don;t mind my reading your blog. Stephanie (Serena and Edwin's mom) recommended your blog to me as you are dealing with food allergies. First off we don't have a micropreemie, our Sam is 2y2m and has had all kinds of medical issues, our current issues is blood in his stool, off and on visible to the naked eye. Anyways they are thinking that it may be caused by a milk allergy. Steph said that Hallie has a milk allergy and I was just wondering how they found the allergy, what types of reactions she was having to it, and how quickly it took to get her better once she stopped drinking it? Thanks so much for your time. If you want just write to my blog or I will come back here to check.

I love the hugging of the toilet paper. You must try to get that on video!