At dinner yesterday evening, Hallie was watching one of her favorite DVDs, Elmo in Grouchland. She really gets a kick out of Grizzy and her bad attitude (which slowly transforms into one of cheerful cooperation, something that Grizzy is loathe to admit because this might, after all, incur her the loss of her grouch identity card or something). Hallie loves all of the songs (the video features some of Hallie's favorites, like C Is For Cookie and Rubber Ducky and Sing, and who can resist the extended remix of Elmo's Song? Certainly not me; I have this thing running through my head most of the time. Anyway, one of the songs is the Nightbug Boogie. Hallie seems to love bugs (and snakes and all sorts of animals, really). When the song came on, Hallie stuck her finger up her nose. As usual, I said: "Hallie, don't stick your finger up your nose." She retorted: "Boogie." And it was then that I realized that she had linked her boogie (which she was busy excavating) to the Nightbug Boogie. Very smart. And quite appropriate given that grouches love slimy, yucky, grungy things so much.

Since I don't sit there with my camera at dinner (often, at least), I have neither a video nor a picture of this. But one thing that we did manage to get on film (or digital medium) is this: 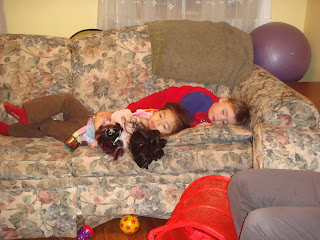 It would seem that Hallie and Karina had zonked out on the couch after a very active play session. Not so! Earlier last week, Sharon had taught Hallie how to pretend sleep (complete with side effects that are sadly lost on a digital still). Hallie loves to lie down and do her snore (which kind of sounds like a cappuccino maker if you ask me) and close her eyes. Hallie taught this to Karina and the two of them did it on command for us on the couch the other night when Karina was over (for what was, indeed, a very active play session that led Hallie to zonk out quickly once she did go upstairs to bed).

Hallie has also been experimenting with couture of various kinds. This is her Super Hallie look, which is composed of various components of different Disney Princess outfits: 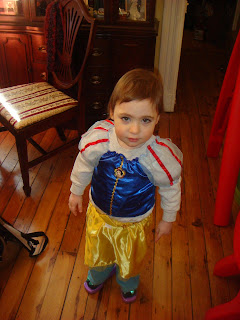 Here Hallie is practicing her drums (I have threatened to buy her congas...Sharon was not terribly amused, though) in a very adorable hoodie: 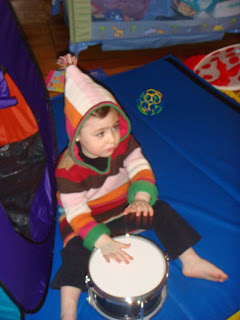 Lately, Hallie's also been enjoying playing with her playdough (which is now safe since we're pretty sure that she is okay with wheat products, which playdough contains). Sharon took this cute video where Hallie is playing and watching herself play in the fisher price video karaoke thing that Aunt Laura, Uncle Bryan, and the cousins got Hallie for Chanukah:

I think this qualifies as pretend play, so take that EI evaluators!

Otherwise, the busy-ness around here continues. Our wonderful friends Brett and Sheila swooped in this weekend and helped us get both Hallie's room and the nursery in order. The crib is now in its place and the futon--rebuilt with skill and craft by Brett so that we did not have to use the car jacks to keep it from falling apart (please don't ask!)--is in the bigger of the two bedrooms on the second floor. This is Hallie's room, and also doubles as the family sleeping room. Sheila helped me lend some order to the basement so that we can both find things and not trip over debris and kill ourselves when doing so. Kim brought back the last of the baby items (the car seat, baby bath, bouncy chair, and more clothing that Taylor has outgrown) so those things need to be sorted and put away. But otherwise, we're good to go.

And that is a good thing, because Sharon is now FULL term. The momentous milestone was reached on Saturday but I'm even more excited that a. the baby will be an Aquarian and b. the baby, unless she's fast tracking it out of Sharon in the next nine and a half hours or so, will be born under a new president (and one whom I respect, who also happens to be the first US president to have graduated from Columbia College in the City of New York, which is where I went. Oh and let's not forget that Obama is the first African American president. His oath of office tomorrow will be a very nice, but sadly posthumous gift to Dr. Martin Luther King). So, for lots of reasons, both personal and political, I am very happy that the Great Expectation has hung in for the long haul.

Finally, for those of you keeping tally, we're up to 16 days without vomit in 2009. This is way cool. (But please note that this post, which I began on the 16th was only just completed on the 20th...it's tragic when life gets in the way of blogging!)
Posted by abby at 6:57 AM

SO glad to hear that you are full term and getting things in order! I wish I could help or at least watch Hallie so you could get things in order! I would love to see you when you deliver. I'm at work saturday this week and then tues,fri,sat next week! Yeah!

We are watching Elmo in Grouchland as I type this! Got to love elmo
Glad to hear things are going well.
FANTANSTIC THAT YOU MADE FULL TERM!!!! That will be my goal if we ever decide to have another. Did you have Hallie allergy tested with the skin testing? They are going to do that for Sam pretty soon. I am anxious about it, but hopefully it will go well.

Congrats on the awesome full-term milestone! Hallie is definitely adorable, fake sleeping with fake snoring is a hilarious kid trick. Niecey recently started playing dead, it involves lying on her back and having her legs and arms stuck up in the air, not sure where she picked that up, lol. You have definitely got to get the fake sleeping thing on video before she stops doing it.

Please, bring Hallie over for a drum circle :)