Well, I never did get around to doing that last-post-in-2008 thing the other night, but as promised, I do have a whole bunch of photos stored up from this holiday season.

This year, Hallie got into celebrating Chanukah by helping us light the menorah and sing the blessings and songs. She was very excited about the whole thing. First, we'd read a bit from her My First Hanukkah Board Book (who the heck knows how to spell the name of the holiday in English!) and count the number of candles we were lighting. Then we'd sing, and Hallie would clap along or punctuate our singing with a few carefully-syncopated thumps on her drums or cymbals. We didn't do the whole gift thing in the way that we probably will from here on out (one gift per night, with the big one coming on the last night); the arrival of the tumbling mat a bit early, coupled with the fact that even we don't have sufficient wrapping paper stored up to cover that thing, kind of set an informal tone to our gift giving early on. But between our gifts to Hallie and those she received from friends and family, I can assure you that she more than exceeded the stipulated eight. Sharon's fears that Hallie will grow up not knowing or believing in Santa Claus seem misplaced at this juncture. Sharon purchased a very inexpensive stuffed Santa at Target for Hallie a couple of days before our visit to Macy's and told Hallie that this was Santa Claus and that she was going to meet the real Santa soon. Hallie appears to have internalized this message and now likes to grab hold of Santa and tell us who he is. Here she is introducing Santa to her rubber duck: 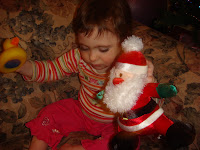 And this year, much more than last, Hallie was very into opening the numerous presents that she received: 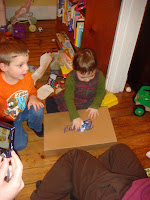 Last year, Hallie was all about the paper. This year, she was very much into the bows: 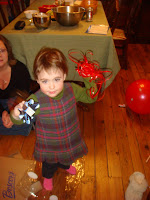 We're not sure where she learned the word 'bow' but discovered that she knew it when she encountered them on her gifts. This has turned out to be one of the many many words that Hallie knows that she learned somewhere but not, as far as we can tell, from us. (We are hoping that she doesn't learn a few choice words that occasionally slip out of our otherwise dainty lips, but that's another story altogether).

Since we're trying to encourage pretend play and since we know that Hallie already knows the proper function of stethoscopes and otoscopes, what better gift could there possibly be than a very elaborate doctor's set? Thank you, Aunt Laura, Uncle Bryan and cousins! 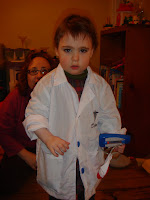 And Grammy is responsible for our latest attempt to encourage Hallie's creative side whilst breaking her of the rather annoying habit of wall-drawing: 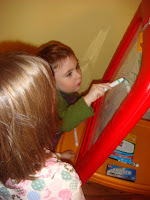 In the end, it was a lovely holiday season and we're very grateful to have been able to spend part of it with our family and friends. Here's Hallie engaged in a fun game of peek-a-boo with Uncle Bryan: 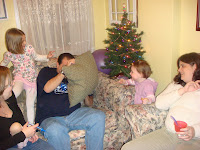 On New Years, Aunt Laura and cousins Sarah, Hannah, and Adam came back down to our house to spend the night and welcome in the New Year with me, Sharon, and our friends Sheila, Brett, and their little girl, Alex. Hallie was thrilled to have the company of her younger cousins and Alex and played, and played, and played.

Here's Hallie having fun coaxing Sharon to blow a noisemaker: 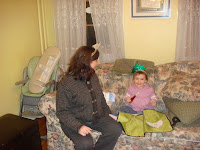 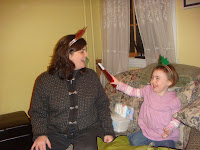 Alas, all of that playing yielded one very tired little two-and-a-half-year-old. Our girl ended up falling asleep at about 10:30pm. The other kids (little and big) did stay up in time to greet 2009 with a toast (though not much beyond that): 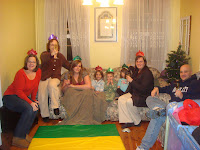 Hallie was thrilled though to wake the next morning to find that her cousins were still here. The kids had a great time until Aunt Laura needed to pack up the posse and return home to South Jersey. I know that I'm not the only one who hopes that we see them soon!

On other news: first, Happy bloggiversary to me! I can hardly believe that it's two years since we started this thing...wow, does time fly.

Hallie ended the year with 173 vomit free days and has begun this year with 2 days sans spitting. She has also discovered that she adores 'zips' (lays potato chips) and, for the first time, has begun to express some interest in food more generally. Ami fed Hallie some exotic food (though not nearly as exotic as the wheat thins and lays chips she's gotten from us) for a couple of days this week. A jar of sweet potatoes seems to have gone down fine but the attempt at various berry mixes of baby food (pears and raspberries, pears and strawberries, and apples and blueberries) haven't gone nearly as well. These all seem to have led to an upsurge in reflux. So we'll move on from those and see how she does with other stuff when Ami takes over food experimentation next week. Our goal is to rotate in the new foods--never give them two days in a row and perhaps even wait three days between reintroducing a new flavor after its first ingestion. This might help Hallie adjust to the new food and prevent things that are hard for her to handle from reaching a critical mass in her tummy. And everything we try is going to be pureed in order to take the question of texture off of the table. We'll see, but 2 days in 2009 so far does make us rather hopeful.

And, speaking of hopeful, I would be remiss not to mention that we had a 34 week ultrasound on the 31st that checked on the size and position of the no longer little bean. The baby is head down and about 5 lbs 5 ounces, which is tremendous (to put this in a bit of perspective, let's just remember that Hallie and Olivia were 1 lb 5 ounces apiece). As per today's OB appointment, everything looks good: Sharon's cervix has not yet effaced and we're hoping that we have a few weeks still to go. Sharon is feeling a bit more achy and her sciatic nerve is painful (the baby is head butting her or something in a very uncomfortable spot) but for now the baby is staying put. Which is a good thing given that we are in no way prepared for our Great Expectation's arrival!

I remember you telling me early on that you just wanted Sharon to stay pregnant in 2009! This is wonderful wonderful news!
It's gonna be a great year, I just know it!

Happy New Year! Glad to hear the experiment so far has been going OK, hope that trend continues. It is so great that the pregnancy is going so well (except for the nerve kicking), amazing to think the baby is like 5 times bigger than her sisters were when they were born. Not too much longer I'll be checking this blog to see pictures of two totally adorable children =)