I figure that, with all of this media hype about the first hundred days of the Obama presidency, that Hallie's accomplishments over this past four month period require some touting, too. So I will begin with the major milestone: 75 vomit free days so far this year. And lately we've been averaging only one day a week that doesn't go as well as expected. For us, and for Hallie in particular, that's huge. And, on top of this, we've dropped down her dose of reglan considerably (from about 8 ml a day to 2 ml a day) and halved her dose of axid. We're not seeing any increased reflux, even through a couple of late winter colds and the sudden onset of really awful spring allergies.

To what do we attribute this sudden, and happy, turn of events? What we think is going on is that Hallie's food sensitivities and allergies have finally begun to abate. We haven't done a thorough scientific study of this (they were awfully hard to assess scientifically to begin with since they are purely GI events and are not histamine mediated). But we do know that Hallie recently has had some food that is technically unsafe for her and that, in the old days, would have provoked huge amounts of spewing and that, this time around, she seems to be okay. These foods include a rather yummy flourless chocolate cake from Whole Foods that will be our dessert of choice at Hallie's upcoming third birthday in a mere six weeks if she keeps this up! We're not ready to put her on cow's milk or eggs or anything but we're no longer quite as concerned if she gets into something unsafe or requests a bite of some heretofore forbidden fruit or decides to steal something like ricotta cheese ravioli off of Jake's plate, as she did during a recent visit: 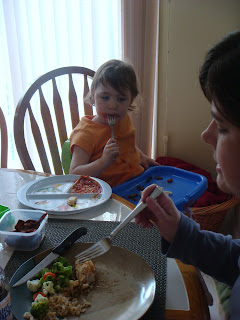 Hallie has taken a strong liking to spaghetti sauce and even managed to eat a whole ten rotini in sauce at feeding therapy this past week. So, while we do know that tomatoes are technically a fruit, we nonetheless are counting them as a veggie and can happily say that Hallie has her first consistently-eaten vegetable (other than potatoes). We're still trying to wear down her defenses against carrots and green beans, but we'll take what we can get! Our sense is that it's going to take a very long time for Hallie to trust food generally and that we are still going to have to go quite slowly in our efforts to introduce her to stuff. But as of this month, she has eaten and likes the following foods: apples, pears, prunes, plums, goat milk and cheese, french fries, chicken hot dogs, bacon, fish sticks, potato chips, oreo cookie middles, pasta with sauce, and watermelon. That's about double what she was eating as of December and we're hopeful that we can get to 20 foods by the end of the year.

Along with her eating milestones, Hallie is also developing well in other ways. Her speech is getting much clearer and robust. She now regularly says the following:

-When playing with her animals or pretending to be them: "A (fill in the animal) says (fill in the sound)"
-When building with her blocks: "I build!" "How tall" and, my favorite, "it felled!" (this exclaimed upon knocking down whatever tower she was constructing).
-"I thank you!" whenever I give her something she has requested.
-"Watch Elmo's World Wild Animals" when she wants me to put on one of her favorite DVDs.
-"I play outside" when she wants to go to the playground and "bye-bye playground" when she leaves the park (she uses the ---'bye-bye (fill in the blank)' construction a lot when she is transitioning from an activity.

Additionally, Hallie has a ton of words and more and more emerge every day. She consistently uses plurals and gerunds (-ing) endings now and her pronoun usage is pretty good. She seems to understand past tense endings (hence the "it felled" construction which, while technically erroneous, demonstrates an understanding of how the crazy English language works). And, most importantly, her speech sounds pretty darned spontaneous these days and now includes quite a bit of impromptu singing.

OK--Lea is waking up. I will post this now and try to do another update later.
Posted by abby at 11:24 AM

What a lovely post to read this morning as I'm falling asleep over my desk! Such good news on the food front, and the talking too! G. does the same erroneous past tense bit. One of my favorites: "Mommy throwed up" (repeated over and over again, of course).

Keep up the good work, everyone!

I am blown away by how old Hallie looks in that photo, sitting there with a fork in her mouth and sauce all over her cute face.

The photo of Lea smiling below is too sweet.

Hey there! Haven't written in a while. Glad to hear things are going well on the home front. I just wanted to say that we had a picky veggie eater for a while too. I bought a book called "The Sneaky Chef" which has all kinds of ways to add veggies, but what we did with carrots, sweet potatoes, and squash was buy the baby food ones (or puree our own) and add them in slowly increasing amounts to spaghetti sauce. So at least they get it.